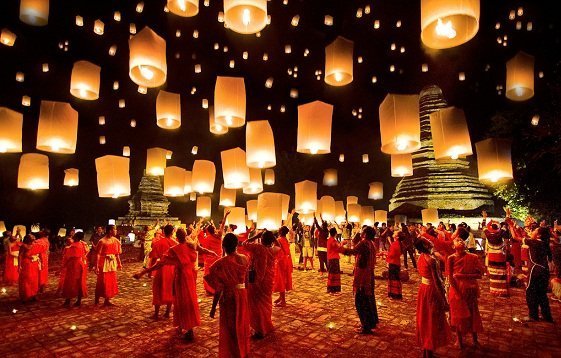 Thailand Festivals Chiang Mai. There is always a level of confusion over the above festivals and therefore I want to start by clarifying the dates of  both the events in Chiang Mai and then provide further details on the celebrations at Mae Jo.

Just to clarify: The sky lantern release at Mae Jo is not part of the Yi Peng Festival or the Loy Krathong Festival

This is important so I thought I will stress it again ‘The mass lantern release at Mae Jo is not part of the Yi Peng Festival’ or the Festival of Loy Krathong. Hopefully that has sorted that matter once and for all!

The Mae Jo lantern release, is a privately run concern by the non for profit organization that is DSF. I will continue to refer to the celebration as the Mae Jo in the hope that it makes my thread easier to follow. In fact Mae Jo is the name of the university near where the event is held.

This is where the confusion lies, in the past the organisers of the Mae Jo event have used Yi Peng in their advertising, they now use the terms Yeepeng, Lanna  Kathina celebration or International Event. Yeepeng is the local word for the same event while Lanna was a kingdom centred in present-day northern Thailand from the 13th to 18th centuries and Kathina refers to the act of giving new robes and offerings to the monkhood as part of the annual thod Kathin or kathina ceremony.

Who are the DSF?

The sky lantern release at Mae Jo is arranged by a private Buddhist group, Duangtawan Santiparp Foundation  in association with Tudongkasatan Lanna (Lanna Meditation Sanctuary). DSF are a Buddhist sect who specialize in large-scale events that are particularly photogenic and targeted to attract media coverage.

Hopefully that has clarified the issue and now we can move onto what happens in the Mae Jo event.

Where is it held?

The grounds behind the Mae Jo University, in the temple grounds of  Lanna Dhutanka San sai District,  about 13 kilometres outside of Chiang Mai Thailand.

The primary reason to light a lantern is to offer respects to Buddha and secondly it is believed that the lanterns carry away troubles and bad luck, especially if it disappears from view before the fire flickers out. It is also an opportunity to make a wish for the future.

The sky lanterns ‘Khom Loy’ are usually made of Sa paper  or tissue paper with a bamboo support which holds the flame. A paraffin soaked cloth or a small fuel-soaked disk is used for the flame, which creates when alight sufficient hot air to inflate the lantern and provide the uplift for the lantern to be carried into the night’s sky. (The Lanterns at the festival are made from recycled paper, they adhere to fire regulations. By using only bamboo they are designed so they won’t short-circuit power lines if they land on them)

This event is both crowded and a pain to get into and out of,  but still should not be missed as these problems are quickly forgotten once the lanterns take to the sky. The date of the event is not normally widely published until a month or so before the actual celebration.

What many tourists and travel writers seem to overlook is that the lantern release at Mae Jo is only part of the day’s events. The main focus for most Thai/Buddhist visitors is the ‘khatin’ (or ‘khatina’) robes ceremony  (the ceremony normally begins around 13.00-13.30) and making merit which includes money trees. Hence most tourists turn up around 3pm but in doing so they miss the full day of events and miss why it is an important day to Thai’s and Buddhists in particular.

If you are not interested in the day’s activities and only want to see the launch of the sky lanterns, aim to get to the event between 3-4pm to get a decent view of the proceedings.

A word of warning while there are many vendors selling Khom Loy lanterns outside the temple, these are not allowed inside. Lanterns are available to purchase once you get pass the gate at 100 baht. You should buy one as they are pretty easy to get air borne and there are always people around to offer a helping hand, more importantly you get to join with those around you in the simultaneous release of the thousands of Khom Loys.

It must be noted that In 2015, the Chiang Mai authorities instructed the Mae Jo temple that they would only be permitted to release sky lanterns on the night of Yi Peng/Loy Krathong. This resulted in there being no free event at Mae Jo in 2015.

Times for the lantern release ceremony.

Monks take their place on the raised semi-circular stage between 5.30-6pm and then begins a Buddhist ceremony involving meditation and chanting which takes around an hour to complete. There after there is procession of senior monks and those who have sponsored the kathin robes ceremony, this is followed with further prayer and meditation. The first countdown to the simultaneous lantern launch of thousands of Khom Loy takes place at approximately 7.15 – 7.45 pm. A second launch is arranged shortly after. By 9pm the crowds are starting to drift away, you can stay on should you wish but closing time is 10pm.

How to get there from Chaing Mai

The best advice for getting there from Chaing Mai is to hire a motor bike for the day, approx. 150 baht. From the city centre it may well take you up to 40 minutes to get there on-the-day, which is still considerably quicker than a Tuk-Tuk as the roads will be a nightmare and the journey time can be 4-5 times this.  Do remember if you do get a Tuk-Tuk, you will need the driver to bring you back as there will be a shortage of transport when you want to return to the city, approx. 600 baht return trip. Do agree the price in advance and make sure you arrange a time and a place for your pick up on the return journey.

If you are not comfortable on a motor bike try an organized trip, local tour operators charge between 500-1000 baht per person, for which you get an air-con bus, pickup from your hotel, a lantern shared between two people, a place to park your bum and a return to your hotel.

This is an all ticket event, there is no entry on the night without a ticket. The ticket price is approx. $100 – $300 and includes round-trip transfers to a specific meeting point in Chaing Mai, Lanna style food, a mat to sit on and your own designated spot, two lanterns of your own and a Krathong. Tickets are limited so it’s far less crowded, the down side to this event is there is no daytime robes ceremony or any other activities.

Tickets can be purchased directly from the DSF or from selected travel companies in Chiang Mai.

Things to note for both the free and paid dates

Please do remember this is a religious festival and therefore you must wear respectable clothing e.g. your shoulders and knees should be covered and white clothing is preferred.

Be prepared for the weather. Blue skies and hot afternoon sunshine can very quickly give way to torrential evening rain.

No smoking or alcohol is allowed. Food is permitted to be brought into the grounds and there are vendors inside and outside before and after the event.

Children under 13 are not allowed at the lantern ceremony.

Do switch your phone to silent during the meditation and chanting ceremony.

Do take a mat with you as you will be sitting on the ground as there are no seats. (Free event only)

The exit routes are poorly lit so do take a torch.

“The inky black night provides the perfect backdrop for those lucky enough to witness this absolute wonderful and unforgettable sight, as an estimated 10,000 Khom Loys float silently and lazily up into the heavens.”

For more on the Yi Peng Festival click here