Hua Hin Hotel Booking.  Hua Hin (หัวหิน) is a seaside resort city in Thailand. It is popular with Thais, having become quite fashionable as a weekend getaway spot for Bangkok residents, as well with foreigners and as an ex-pat retirement or holiday home location.

It is in the Province of Prachuap Khiri Khan, to the north of Prachuap city, which is about one to two hours distant by bus.

Although developing rapidly, there is a commitment by the local and provincial authorities to avoid the kind of overheated blight that has affected other beach resorts in Thailand.

Popularised as a resort in the early-1920s by King Prajadhipok, Hua Hin is closely associated with the Thai royal family and is a quiet and relaxing seaside resort ideal for family vacations, a reasonable 2.5 hours drive down from Bangkok. Until 1934, it was known as Samore Riang (สมอเรียง), or “rows of rocks”.

The tranquil fishing village was turned into a royal resort and consequently became popular among Siam’s nobility and upper classes. In 1928, Prajadhipok built his Klai Kangwon (Far From Worries) Palace. As of 2007, Klai Kangwon is a full-time residence of the current king and is not open for visitors, although the outer palace grounds are open for walkers and joggers 16:00-19:00 daily (wear shoes, have sleeved shirts that cover at least your upper arms and bring your passport).

The 5 km long beach itself is pretty, more so than Pattaya‘s, and the sea is relatively clean. However, most of the beach can completely disappear along certain parts of the coast during high tide. Besides just sunbathing, snorkelling and swimming, visitors can also enjoy golf, spas, caves, peaks, waterfalls, shops, seafood and nearby national parks. The town is clean, warm and laid-back, making it ideal for families and couples.

Hua Hin has a tropical climate with high humidity and occasional rain. It is typically pleasant however, and can be enjoyed all year round. Generally, the best time of the year to visit Hua Hin is in the cool season from November to February, but for those who like it hot, then the hot season is from March to May (temperature gets up into the higher 30s). The rainy season (although it doesn’t rain every day) is from June to October with September being the rainiest of all. For those who don’t appreciate rain, be advised that the rain in Thailand usually comes in short sharp bursts. It doesn’t usually drizzle for long periods of time. 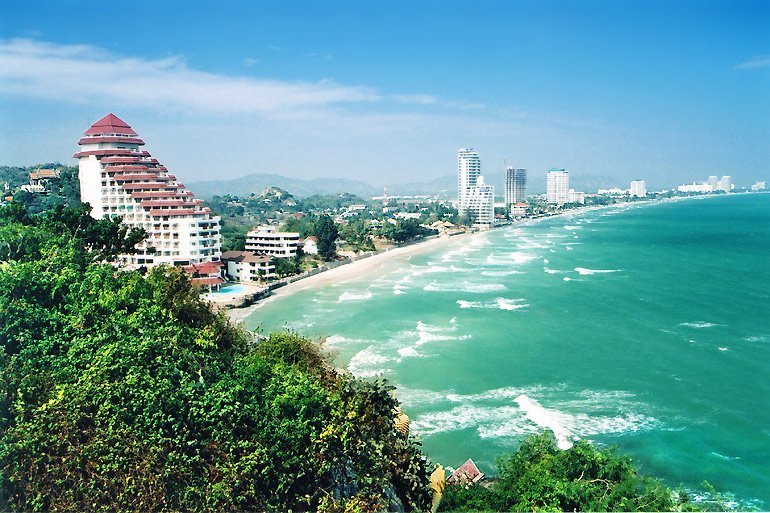 Trains are an easy way to get to Hua Hin, as the train station is right in the centre of Hua Hin. The train station is worth a look itself because it is a very traditional Thailand design. The trains go very slowly getting away from Bangkok, so the 2 1/2 hour road time to Hua Hin stretches to 4 or 5 on the train. If, however, road traffic is bad, this can stretch a car or bus journey!. The price of the train is around 250 baht(and only 44 baht for ordinary trains). Most trains on the southern route stop at Hua Hin. They leave Bangkok’s Hua Lamphong and Bang Sue railway stations 10 times daily between 08:05 and 22:50. Returning from Hua Hin to Bangkok, only two trains in the afternoon are bookable. Either an air-con option for +400 bath, or third class (the latter can only be bought one hour before the departure). See the State Railway of Thailand [1] for more information on time tables and fares.

More convenient to downtown Bangkok, you can also take a minibus from near the Victory Monument (Anusawari Chai), near the BTS skytrain. Cost is 180 baht, limited baggage. The Hua Hin vans board in the alleyway next to Century Movie Plaza close to the stairs at the southern end of Victory Monument BTS station. From the Skytrain station, take the walkway south, descend the staircase on the east side to street level. The minibus area is next to the stairs. Look for a small table with “Cha Am, Hua Hin” written in English to buy your ticket. (as at Dec 2014 the minibuses have been moved along Phaya Thai Road, underneath the BTS line as it goes towards Phaya Thai station). T-Tour, Tel. 080-090-6540

Minibuses from Hua Hin back to BKK (180 baht) leave opposite the Pananchai Hotel in Naebkehas Rd, some 200 m along a side road from the clock tower. Service to Pattaya as well.

The main bus station is well outside the centre of town on Petkasem Rd beyond Soi 94. This is some 3 km south of town centre. A tuk tuk there costs ~180 baht. This bus station is for buses which are going to or from Bangkok and points south. Update: May 2015, two official tourist board offices inform travelers that the main bus station only serves south destinations, not Bangkok. You can catch, however, a no-frills bus from an office in the centre of town for 160 baht.

The “bus station” noted on maps of the area is a local one in the centre of town from where all the non-air-con local buses and songteows depart, but blue buses from Bangkok terminate here, and probably leave from here also. The orange bus from Bangkok Southern Terminal (150 baht) which takes about 3.5 hours, meanders along the main road and you specify where you want to get off. The other first class buses go to the station beyond Soi 94 on Petkasem. Stop the bus at any point prior to this if you want to get off. The clock tower on the left (coming from Bangkok) is effectively the town centre, but keep your eyes open as it is easy to miss.

Taking a taxi from Bangkok to Hua Hin (distance about 200 km) is possible. Price after negotiation should cost around 2,000 baht: the price for a taxi from Suvarnabhumi (Bangkok) airport was 2,600 baht in November 2009 (3,800 – 4,000 baht, January 2014). The limousine services available at Bangkok Airport are more expensive than an ordinary taxi.

Private taxi from Hua Hin to BKK Airport should be in 1,600-2,000 baht, and is bookable via agents around town. A few are located outside the post office, and others are along Naresdamri Rd.

There are regular minivans to and from Hua Hin from various cities. Price from Kanchanaburi (3.5 hours) was around 250 baht [jan 2014]. There is a scam – the driver will stop somewhere in the city a short distance from the bus station, and shout at foreigners that it’s the “final stop” and starting throwing your bags in the street. He only tells foreigners to get off and won’t let you stay even when local Thais tell you plainly “this is not the final stop”. A songthaew waits to transport you the last few hundred metres of your journey for an outrageous 150 baht. This seems to be a common scam with the minivans in Thailand.