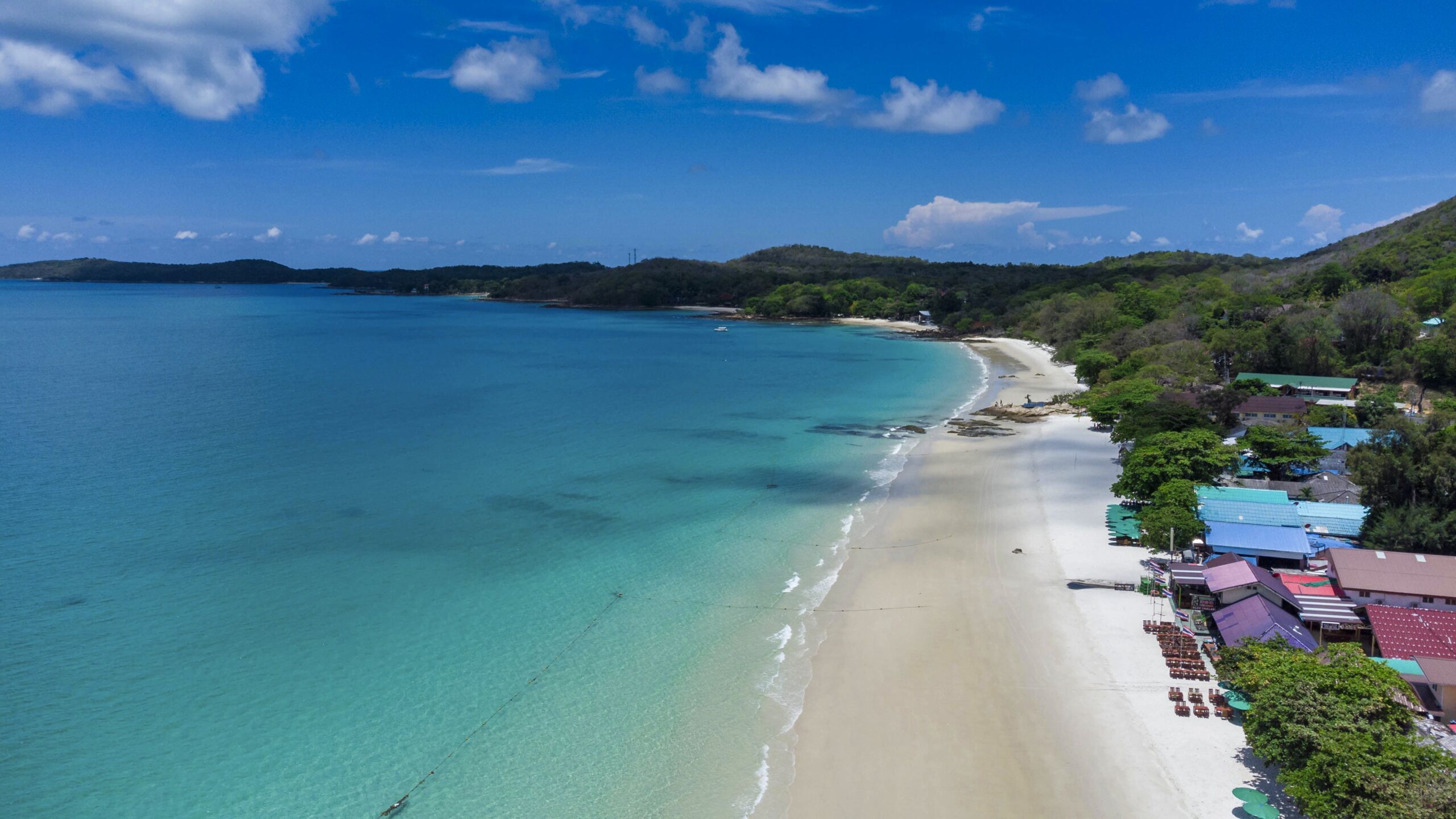 Koh Samet Beach Thailand. Just 200 kilometers from Bangkok in the Gulf of Thailand, the T-shaped island of Koh Samet is famed for its white sandy beaches, exotic coral and crystal clear waters. Koh Samet has developed steadily over the past decade or so, but it hasn’t been the victim of over zealous construction which has hit the likes of Koh Samui (or even Ko Chang). The island is typified for its splendid beaches and white silky sand, surrounded by tropical coral reefs and crystal clear sea. Tourists can also enjoy a plethora of delicious cuisine and fine nightlife.

It’s a popular tourist destination for Thais and foreigners alike. As Ko Samet is so near Bangkok, the island is ideal for those in the capital wanting to chill-out with their families for a couple of days, without having to go through all that rigmarole of having to travel down south. It’s only a 2.5 hour ride (in good traffic; expect 3- 4 hours in normal congestion) to Ban Phe, where one can take a 20-minutes ferry to the island.

It is believed that once upon a time, Ko Samet was the home of pirates and that to this very day there are still lost treasures buried somewhere on the island. Thailand’s legendary poet Sunthorn Phu was the first one to put this island on the map when he set his classical epic there, Phra Aphai Manee “The Story of Princes, Saga, Mermaids and Giants”.

Even though Bangkokians had known about the beauty of Ko Samet for decades before, the Thai government put this island off limits and restricted overnight stay there until 1981. In that year, on 1st October, the Forestry Department of Thailand declared Ko Samet and its surroundings to be a National Park.

If you are coming from Bangkok to Koh Samet Island Thailand, there are a few main spots to take the bus to Rayong or Ban Phe, from which you can take a ferry to Ko Samet: Ekkamai, Mo Chit, Victory Monument, and Sai Tai Mai.

From Ekkamai: the bus from Bangkok‘s Eastern Bus Terminal (Ekkamai) to Ban Phe usually takes 3.5 to 4 hours, costs 200 baht (current as of May 2016), and terminates opposite the ferry piers. Tickets for the ferry from Ban Phe to Ko Samet can be bought at the same counter where the bus ticket was purchased. The bus may take a number of side roads or the main road, but could be slow due to road quality or congestion.

From Mo Chit: There is no direct service to Ban Phe from Bangkok’s Mo Chit Bus Terminal — it only brings you to Rayong, from where you can take a Songthaew for about (20 Baht) to Ban Phe. Updated: there’s mini-vans in Mo Chit.

From the Airport (direct route not possible, as of May 2016): There are direct first class bus services between Rayong and Bangkok‘s Suvarnabhumi Airport (as of May 2016, this bus between the airport and Rayong is no longer running; on the website, it still exists, but when inquiring at the airport, it doesn’t exist. You need to go into the city to take a bus.). From the airport you can go to Pattaya. So, if you take a regular bus from Pattaya or Sattahip, you’ll need to take a songthaew or charter a tuk-tuk to the ferry piers.

They charge 200 baht per person and bring you directly to the ferry piers. You can find the vans in the lane by Century Cinema near Exit 2 of the Victory Monument Skytrain Station. If you have a lot of luggage, it’s customary to buy one extra seat. If just a backpackers’ backpack or roll-on, you can usually fit it in the aisles. These buses only leave in the morning. So make sure you arrive here early.

The cheapest way to go from BTS Mo Chit is simply taking bus. From BTS Mo Chit, take exit 4, once go down stairs, turn around and walk for around 150m (Chatuchak park should be on your left on the opposite side of the road, parking lot should be on your right. You will pass mrt (subway) entrance and soon will arrive at a bus stop. Almost all buses that stop there will go to Mo Chit. Take 145 or 96 bus (6.5 bath or 11 baht for air conditioned). Mo Chit terminal is the terminal station. Once arrive, cross the road and you will arrive at Mo Chit mini-van terminal.

From the Mo Chit mini-van terminal to Ban Phe, there’s van number 915 located in building C which costs 220 baht (with 20 baht discount on return trip if you keep receipt of the departed trip). The vans are comfortable and fast. Only one stop at gas station. Take around 3.5 – 4 hours. You can tell the drivers which pier you want to get off (recommend Nual Thip). For return trip, you can get off at Lat Krabang airport link station which is one station away from Suvarnabhumi surprised. You can book [www.thaiminibus.com online] (250 thb). Or you can buy directly at the counter in the van terminal.

Koh Samet Beach From Sai Tai Mai: There is a minibus operating from Southern Bus Terminal (Sai Tai Mai) leaving ca. every 2hrs. It will take you directly to Ban Phe (220thb dec 2014). (make sure you get dropped at the main boat ticket office (24hrs open) at the departing pier, even if you get there late in the evening. Usually they take you to a travel agent that sells you overpriced speedboat tickets. Shared speedboat price should be around 300thb – max 500thb dec 14).

Koh Samet Beach Island Thailand. Going back: If you plan to get back directly to Suvarnabuhmi airport Bangkok, you can take a minibus from Ban Phe pier (200 thb May 2016). The tickets can be bought directly from an improvised booth a few meters from the pier main building. Just walk out of the pier building, turn left and find the minibus station on the left side. The bus takes you to Pattaya or the Bangkok Airport link train station, from where you’ll need to take the train one station to the airport (15 thb feb 2015).