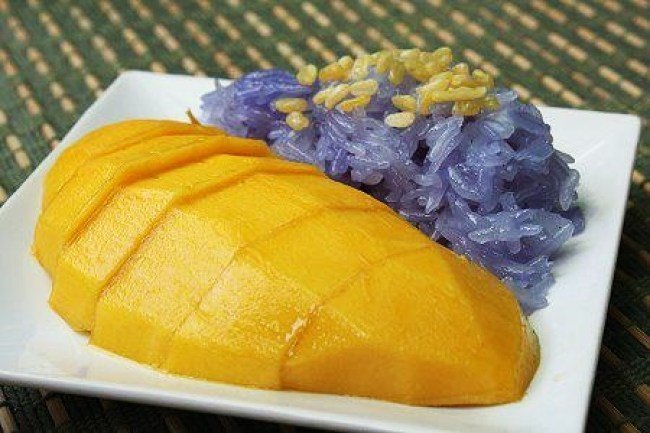 Thai Food Flowers in Thai Cooking. Thailand is full of natural food resources that has found its way into many of the Thai cuisine. What may seem inedible to the more conventional taste buds would be a delicacy or staple in the Thai menu. While we may consider flowers to be a decorative item, in Thailand they are part of the ingredients in a daily serving for a meal. One would find such delectable items at one of the many street markets in Bangkok and around the country selling food or even in a fancy restaurant. Flowers and flower buds are served a multitude of ways. Some are just plain boiled and eaten with spicy chilli paste called ‘nam prik’ or cooked into fancy curried dishes, plain stir fried, battered and crisped or made into an omelette.

Flowers were incorporated into the Thai diet since the olden days when food was scarce and especially for the poverty stricken. Flowers, like other wild plants and creepers soon became a standard item in the Thai diet. It was a fibre source that offered a variety of taste and medicinal properties. The humble flowers soon found its way into the kitchen and hands of fancy restaurants who now serve them up as exotic Thai dishes. Combined with other herbs, spices and variety of meats and condiments, they are now a sought after product. Plantations specializing in growing these flowers have now become one of the staple agricultural crops in Thailand.

Here are two popular flower buds used in Thai cooking. The elongated buds are from the Tiger Lily flower. These buds are plucked fresh, cleaned and used in a variety of cooking methods. The most common way to cook Tiger Lily buds are either made into a soup with minced meat or fried into a delicious omelette in a combination of oyster or fish sauce and pepper. The Tiger Lily buds have a distinct and unique creamy flavour that blends well with the fried egg. It is served with hot steamed rice and a sweet chilli dipping sauce.

This other flower bud is from the Cowslip creeper. The buds are eaten either as green unopened buds or as open buds with a yellow flower. Sometimes you would find street stall vendors that sell a variety of home cooked Thai dishes which is called ‘economy rice’, selling boiled versions of this ‘flower among a selection of other boiled vegetables. Thai housewives would sometimes cook it stir fried with some garlic but a more fancy way would be to stir fry the Cowslip creeper flowers with dried shrimp, garlic and a dose of oyster sauce.

Orchid flowers grown organically are made into a delicious snack. This particular snack is found mostly on a weekend market at Koh Kred Island along the Chao Phraya River in Bangkok. Fried in a seasoned batter until crisp, it is eaten as a local snack with chilli dipping sauce.

The Pea flower produces a nice indigo colour and the dye from the flower is used to produce a nice colouring for local Thai desserts or “khanom” such as the ones made from sticky rice and mango desserts called “khao niao mamuang” or combined with rice flour to produce a sweet pudding.

It has been found that many of these flowers and buds contain properties beneficial for the overall health. Some have even been used in traditional herbal remedies for an assortment of ailments and even serious diseases and afflictions. However, to the Thai people, it was a readily available food source and grew in abundance around the country.

The next time you visit Thailand, take a walk at the local street food stalls and look out for these tasty delicacies. Alternatively, you could go to a Thai restaurant and order a dish or two to try!