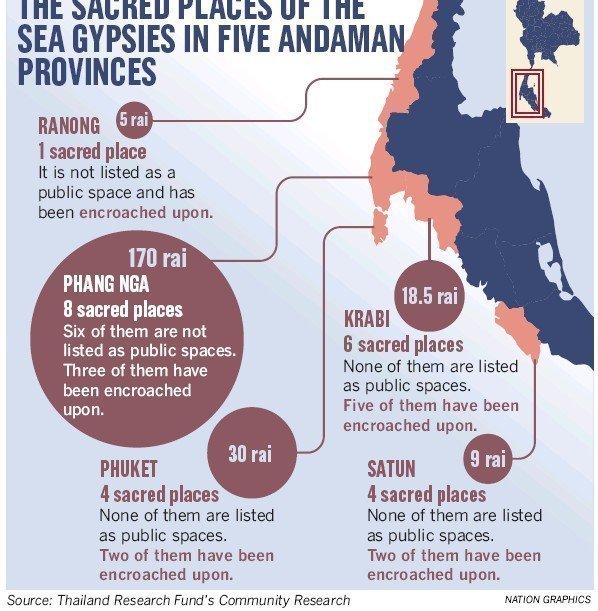 Troubled Sea Gypsies are facing double trouble – from disputes on land and limitations in making a living on sea. It was revealed that 13 out of 21 sea gypsies’ lands have been encroached upon.

“We have to live in very crowded housing on a small piece of land; we face frequent threats from the land owner and have limited choices in earning a livelihood, as we can no longer fish freely like we used to do in the past,” Utai Lakko, an elderly Moken woman who lives in the Rawai Beach sea people community, revealed.

Another Moken woman Taew Sengbut said that after the tourism boom in Phuket, the seaside land prices increased sharply and it led to loss of land for the sea people along Rawai Beach, which once stretched from one end of the beach to the other. “Our community now is just a remnant of the old sea-people community of Rawai Beach. More than 2,000 people have to live crowded into a small area. Our homes are frequently flooded after heavy rains because the canal nearby fills up and we are cut off from the beach by several shops and restaurants in front of the beach,” Taew said.

“The worst pain is our spiritual land has been invaded and the land owner has blocked us from practising our beliefs and celebrating our traditional festivals,”

An academic report presented by the group revealed that many seapeople communities in five Andaman provinces are having similar problems as the Rawai community, as there were 21 sea people holy places identified and 13 of them have been encroached upon and only two have been registered as public spaces.

On the livelihood problem, Utai said most of the sea people, including herself, did not own a fishing boat anymore because the tsunami 11 years ago sank her boats and fishing equipment.

“We did not receive any help from the authorities to buy a new boat. If we want to go fishing, we have to hire a boat at Bt100 per day and we cannot fish near the islands anymore because they are preserved for tourists,” she said.

“I have to find the clams on the beach, which is not sufficient for everyday life, so I have to sweep the street for Bt250 per day,” she added.

In contrast to the past, she said when she was young, the community could harvest plenty of food from the land and sea freely and we could also practise our beliefs.

“I was born and grew up here. We lived by fishing in the sea and grew food on the land. We have lived here since our grandparents’ time and never moved anywhere,” she recalled.

Utai and Taew were among 30 local aboriginal Malay Urak Lawoi and Moken people who came to Bangkok to submit their pleas to several official agencies, as their community was assaulted by group of armed men on January 25 because of conflict over land ownership.

The group yesterday handed a petition to Interior Minister and Social Development and Human Security Minister as part of its effort to fight for the right to practice its beliefs on sacred ground, cancel the improper registered land deed, arrest the group of armed men who attacked them and protect similar sea people’s holy lands in five Andaman provinces.

Meanwhile more than 100 sea gypsies also gathered at Phuket City Hall to wait for the authorities to come up with a solution on the land problems.