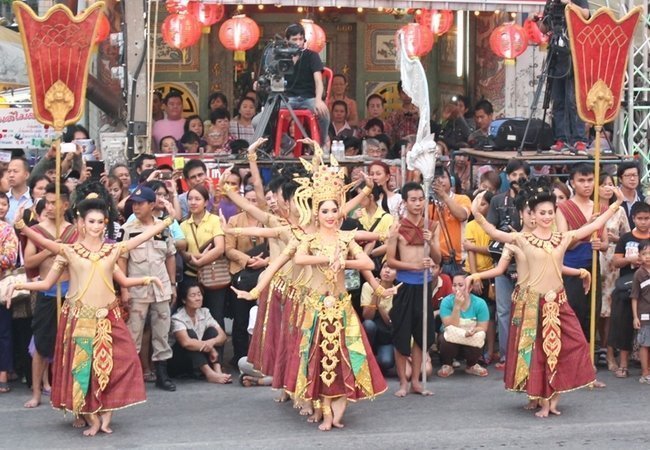 Monument to Ya Mo

How to get there: From Bangkok

A little about Nakhon Ratchasima

Thao Suranari Memorial Fair Travel Thailand. Also known by its colloquial name of Khorat (Korat). The province is ranked number one in land size and second in population in comparison to the 76 provinces that make up  the Kingdom of Thailand. The provincial motto is “Land of brave women and is best known for its production of fine silk material, Khorat rice noodles, Phimai Historical Park, and Dan Kwian ceramics”.

What is behind the Festival Name

The festival name ‘Thao Suranari’  is the royal tittle given to Khunying Mo, (later known by the locals as Ya Mo “Grandma Mo” – the festival is also known locally as the Yamo Fair) (or Lady Suranari – “the brave lady”) (1771–1852), she was the then wife of the deputy governor of Nakhon Ratchasima, the city was the main Siamese garrison for the control of the surrounding former kingdoms including parts of what is now Lao.

There a number of differing historical accounts of Lady Mo’s exploits leading to her royally bestowed title, what is known is that in 1826 the then king of  Vientiane King Anouvong invaded Siam, seizing the city of Nakhon Ratchasima. As was normal for conquering armies the Lao king enslaved the subjects of the city and forced marched them back towards his capital some 400 kilometres away.

Lady Mo is credited with saving her people. Varying stories describe her rallying the cities people to fight during the siege and either getting the invading soldiers drunk, or leading a rebellion of the prisoners on the way back to Vientiane.

The generally accepted version is that, when the Lao invaders ordered the women to cook for them, Lady Mo requested knives so that food might be prepared. That night, when the invaders were asleep, she gave the knives to the imprisoned men. They surprised the Lao troops, who fled, and the prisoners escaped. Later the Thai King Rama III sent an army in pursuit, led by General Sing Singhaseni. He defeated the Lao forces in three days of fighting and completely destroyed Anuvoung’s capital city of Vientiane. (Taken from Wikipedia)

However history records this amazing heroine’s single handed exploits, she is still held in reverence by the Thai people who come from far and wide to pay respect to her memory and seek her spirits blessing during the festivities. Most of the events are held around the monument to Lady Suranari in the city centre. The monument was built in 1934 and holds the ashes of this remarkable lady.

The festival (billed as the biggest in Isaan) is filled to the brim with local cultural performances in song, dance and music, with the unique Khorat songs such as Phleng Khorat, played in the evenings. The song is a dialogue duet, singing tradition that has developed into a folk spectacle by the people in Khorat and traditionally uses only hand clapping with no musical instrument to accompany the vocals. Other songs such as the Phleng La (a farewell song) are sung with the accompaniment of a pi phat (click to hear the music) orchestra.

Local dancers will perform traditional Thai classical dance which  incorporates elaborate Indian hand gestures and body movements, believed to have been added by Mon and Khmer cultures. Folk dances are regional in character, with the individual dance styles associated with various ethnic minorities.

Added to this glorious mass of noise and colour are an array of shops and exhibitions, displaying and demonstrating local hand crafts along with a firework show, a traditional Thai Fair, a parade and of course a huge variety of street sellers selling a vast choice of succulent food and thirst quenching drinks.

While here in Khorat do take the time to see all that this wonderful province can offer from the splendid Historical Khmer parks of Phimai and Prast Hin Phanom Wan and the earlier relics from the Dvaravati period found at Mueang Semi, to the beautiful waterfalls at Kao Yai National park. Combine any or all of these with the above festival and you will not be disappointed.