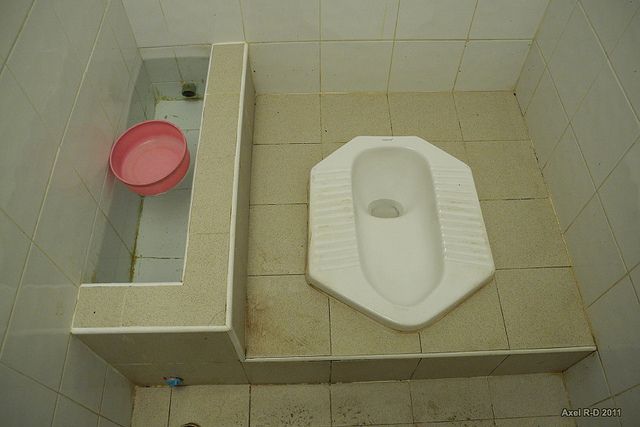 Thailand Squat Toilets. Squat toilets are in high demand across the border. It seems that Myanmar nationals are afraid that Thailand will stop producing the low-riding toilets because of a law passed that encourages home and business owners to switch to western-style flush toilets.

The law was passed on April 23 but becomes effective at the end of August. Apparently, the law doesn’t ban using squat toilets, it just encourages people to switch to flush toilets for health purposes.

Hmmm, we’ve never heard of a law that doesn’t demand but just encourages.

As soon as the law was passed, importers in Myanmar placed large orders for squat toilets in fear that Thai makers will stop producing them once the law changes.

Since then, trucks loaded with squat toilets have been seen leaving border checkpoints for Myanmar everyday since then, particularly at Mae Sot, reported Thai PBS.

Since the law doesn’t demand a switch to flush toilets, it will be interesting to see how many Thais make the switch.

Some people tend to that think squat toilets are cleaner for public restrooms since they don’t require sitting down on them. There are also studies that show that squatting is a healthier position than sitting for doing your daily business.