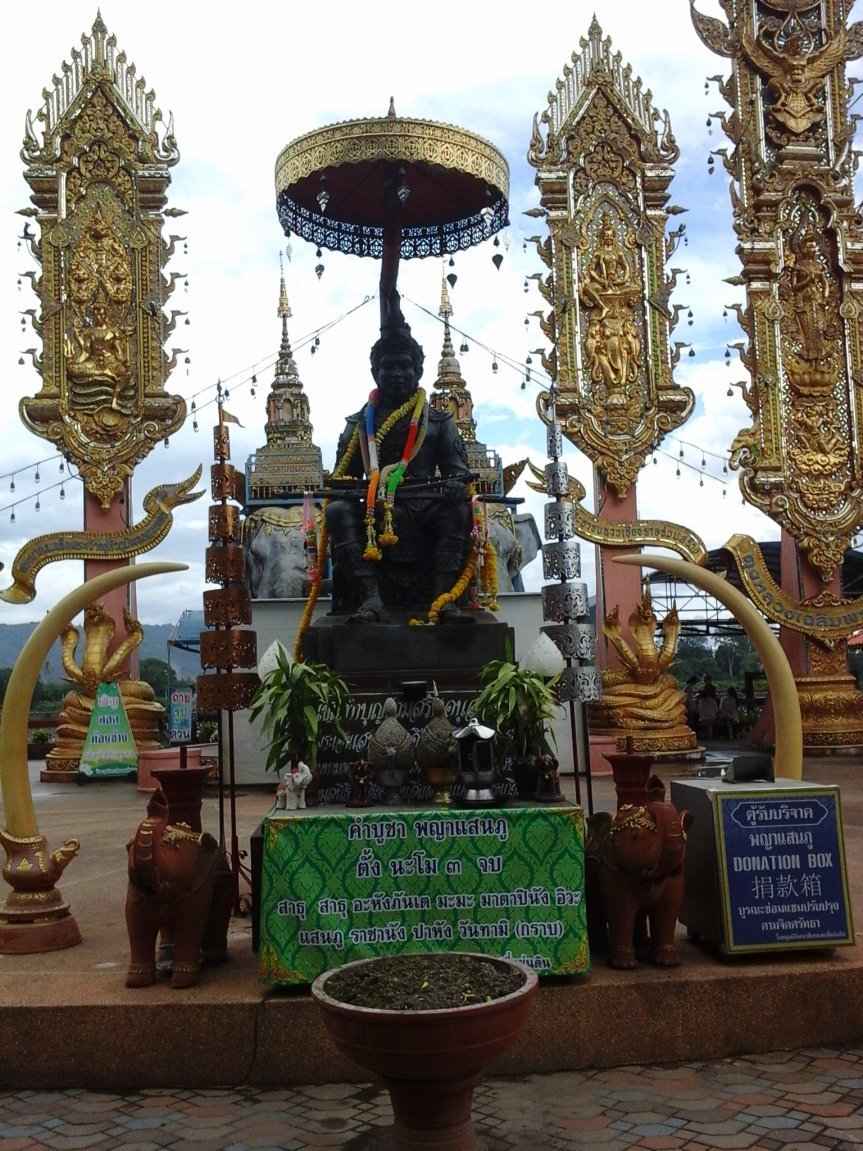 Between Chiang Rai city and Mae Sai city, lies the infamous Golden Triangle. Known for the drug smuggling, poppy growing and opium trade, the Golden Triangle has mostly been cleared of these notorious activities, mostly on the Thai side. Before you reach the site of the Golden Triangle, you can see an Opium Museum which is dedicated to the history and trade of the opium to as recent as the 7-s and 80s. Do not be surprised by numerous police and army checkpoints enroute up to the Triangle but it is a necessity to prevent drug and people smuggling activities. Protocols aside, the Golden Triangle is a beautiful location on the hill overlooking theMekong River which divides Thailand from Laos and Myanmar(Burma).

There are day tours to the Golden Triangle in Thailand but we chose to drive in order to explore more of this region where normal tours would not go. At the point of the Triangle is the famous Golden Triangle Gateway where the Mekong River divides the 3 countries.

The great Mekong River is not just a source for travel between countries but also a food source for aquatic animals (you will find plenty of little restaurants serving dishes of fish, fresh water prawns and more on three sides of the border here), trade of semi-precious stones and Burmese jade, as well as a way to discover the river communes of the Thai, Laotian and Myanmar peoples.

Some of the boat peoples live on floating homes along the river side while trading on all three borders. However if you want to visit the other two countries, there are ferry boats to Laos and Myanmar a little further up that will take you for a fee but require your passport for disembarking.

Up on the hill at the Golden Triangle sits a remarkable huge gold Buddha, the symbol of peace between the three countries whose main religion is Buddhism. You can have a good view of the Mekong River, Laos and Myanmar from here and a little further down next to the temple is a ferry service. There are a few statues of interest here and most magnificent is a pair of more than life-sized elephants in full regalia guarding the entrance to the temple.

At the main entrance in the front is a statue of Kuan Yin, the Goddess of Mercy and plaque of three terracotta Buddhas.

On the way into the temple is a statue of the revered monk of this temple. Offerings are made to him for blessings and good luck.

If you walk a little further from the temple, you will be able to see a few huge totems guarded by a pair of elephants. These totems are akin to gateways into the Golden Triangle and each one stands at lest 10 meters high if not more. the intricate details on these totems are  unusual but the interesting thing is that each one is free standing and able to bear the strong winds that blow through this river valley.

There are also several restaurants and gift shops along the road where yu can get typical c such as live prawns call Kung Ten or Dancing Shrimps which is very popular here or fried river fish. There are also a number of hotels and motels in the area that you can stay for the night if you are planning a few days across the border.