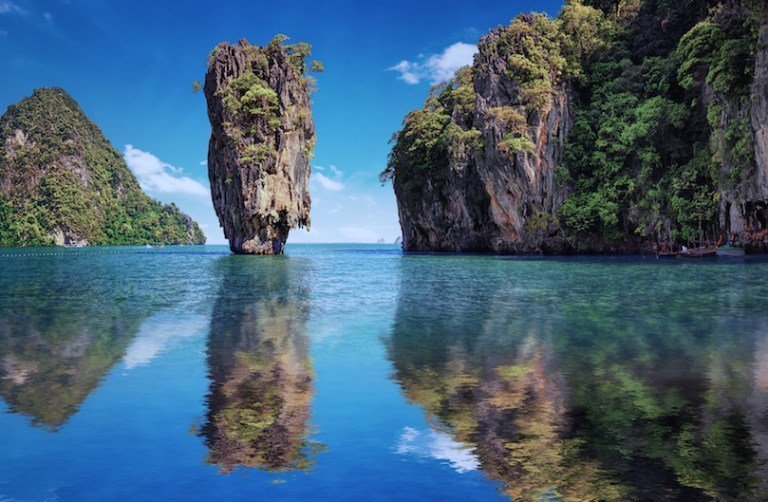 Thailand can also boast 39 Wildlife sanctuaries, 10 Historical Parks of which four of them are registered as World Heritage Sites by UNESCO and a number of wetlands deemed to be of “international importance” under the Ramsar Convention. According to WWF, wetlands are one of the most threatened of all ecosystems, because of progressive loss of vegetation, salinization, excessive inundation, water pollution, excessive development and road building, plus (see our post) invasive species.

Ao Phang Nga National Park (อุทยานแห่งชาติอ่าวพังงา) is in Phang Nga Province in southern Thailand. It was created as a park in 1981 by royal decree (as are all the parks in the Kingdom) and covers 400 square km, containing over 40 islands amid dramatic limestone cliffs that soar out of year-round calm green water.

Evidence of prehistoric humans has been traced back in the park to over 10,000 years ago, as evidenced by some of their cave painting, tools and other items that archaeologists have found scattered throughout the area.

The park includes coastal sections of Mueang Phang Nga District and Takua Thung District. Most of the park consists of an area of the Andaman Sea studded with numerous towering limestone karst islands. The best known of these islands is Khao Phing Kan, popularly called “James Bond Island” because it was used as a location for the James Bond movie  The Man with the Golden Gun.

The dramatic appearance of the islands with their sheer sides has made the area a popular tourist attraction. The park also protects the largest area of native mangrove forest remaining in Thailand. Due to the excessive tourist numbers visiting the islands and their devastating affects on the coral and marine life, (and climate change); the government is considering reducing the number of tourists, who can gain access to many of the islands.

Mu Koh Chang National Park (อุทยานแห่งชาติหมู่เกาะช้าง) is located in Koh Chang District, Trat Province, eastern Thailand,  close to the border with Cambodia. It is a marine national park, situated in the Gulf of Thailand; it has an area of 650 square kilometers (250 sq mi), of which 70 % is marine. The park contains more than 52 islands. The most notable island within the archipelago is Koh Chang, approximately 8 km. from the coast of Trat province; Koh Chang is the third largest island in Thailand after Phuket and Samui and measures nearly 30km long and almost 14 km wide. The other main islands in the group are; Ko Chang Noi, Ko Khlum, Ko Wai, Ko Lao Ya, Ko Mai Si and Ko Rang.

Established in 1982, it is an IUCN Category II protected area with substantial coral reefs.

Khao Sok National Park (เขาสก) is located in Surat Thani Province, Southern Thailand. Its area is 739 km², and it includes the 165 square kilometer Cheow Lan Lake contained by the Ratchaprapha Dam. The park is the largest area of virgin forest in southern Thailand and is a remnant of rain forest which is reportedly older and more diverse than the Amazon rain forest.

The park is traversed by a limestone mountain range from north to south with a high point of 950 m. This mountain range is hit by monsoon rain coming from both the Gulf of Thailand and the Andaman Sea, which makes it among Thailand’s wettest regions with an annual rain fall of 3,500 mm

The park is an archipelago consisting of 11 islands, known as the Similan Islands (หมู่เกาะสิมิลัน), 3 of which are closed to the public, two due to turtle hatching protection programs and reef conservation efforts, while the third is owned by a Thai Princess. Occupying an area of approximately 140 km2 with a land area of about 26 sq km and situated in the Andaman Sea off the coast of, and part of, Phang Nga Province, southern Thailand

These towering granite islands are as beautiful above the water as they are below, topped with rain-forest, they are home to many diverse species such as the Nicobar pigeon (It is the only living member of the genus Caloenas and the closest living relative of the extinct dodo.), mangrove monitor lizards, small flying fox and much, much more. Surrounded with white beaches and fringed by coral reefs, the best time to visit is between December and April, the waters are very clear, making it a good time for snorkeling and diving. Some of the larger islands, such as Ko Miang and Ko Simlan, have hotels and restaurants.

Mu Ko Ang Thong is a marine national park in the Gulf of Thailand, on the shores of the Surat Thani Province. The name “Ang Thong” (Thai: อ่างทอง) means “bowl of gold”. “Mu Ko” (หมู่เกาะ) simply means “group of islands”. The park covers 42 islands with a total area of 102 km², of which only 18 km² is solid land. The park was established in 1980.

The best way to see this park is to take a boat tour or better still rent your own boat. Speedboats and kayaks are both popular here and there are many places that are good for snorkeling and diving. Several islands have beautiful white sandy beaches while others are mountainous giving the more adventurous the opportunity to hike and enjoy splendid views from their tops. In addition to a wide variety of marine life, the islands are home to otters, wild boar, and dusty-leaf and macaque monkeys.

February, March and April are the best months to visit this ethereal preserve of greens and blues; crashing monsoon waves mean that the park is almost always closed during November and December.