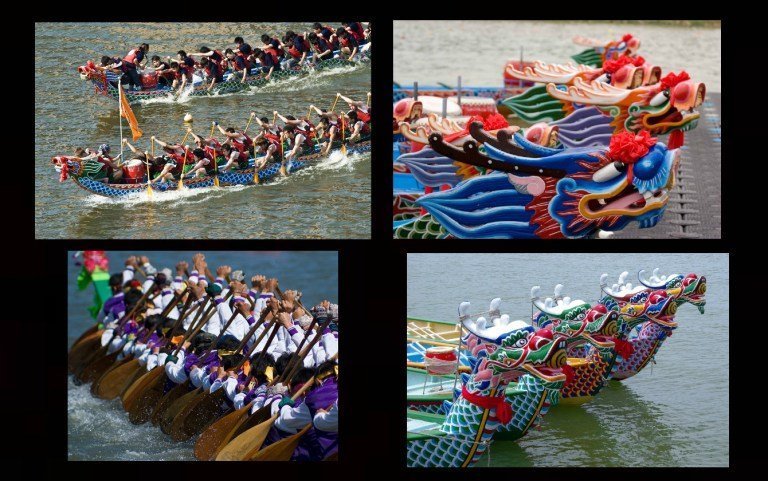 Thailand festivals Dragon Boat Festival. When the Chinese communities in Thailand use food, perfumes and rice wine, to welcome Dragons

Where: Across the Kingdom where there are larger Chinese communities.

Dragon Boat Festival in Thailand. While this day is in truth a Chinese Festival and Bank Holiday, it is also celebrated in Vietnam, South Korea, Japan, North Korea, Indonesia and Thailand, where it is known วันไหว้ขนมจ้าง (Wan Wai Khanom Chang or Wai Chew Festival or Duanwu Festival). In China it is counted as one of their 3 main annual festivals, the others being The Chinese New Year and the Moon Festival (Sept or Oct).

Throughout the rest of the world it is known simply as “Dragon Boat Festival.” Not to be confused with the International Swan Boat Races Bangkok, that takes place in Bangkok, annually on the 2nd or 3rd weekend in December, or the traditional Long Boat Races across Thailand, that are held every year around September to October.

Origins of the Dragon Boat Festival

There are a number of legends purporting to explain origins of the festival, the most popular modern story, surrounds the poet and minister Qu Yuan (c. 340–278 BC). Qu was banished from his home in the ancient state of Chu, during his 28 year exile, he wrote a plethora of much read poetry, only to take his own life by drowning himself in the Miluo River. When his beloved former homeland was captured by the very army he had spoken about and which led to his exile.

It is said that the local people, who admired him, raced out in their boats to save him or at least retrieve his body. When his body could not be found, they dropped balls of sticky rice into the river so that the fish would eat them instead of Qu Yuan’s body. This is said to be the origin of zongzi – sticky rice dumplings.

Common depiction of a Chinese Dragon

Another theory is that the event originated from dragon worship. The food is thought to have originally represented an offering to the dragon king, while dragon boat racing naturally reflects reverence for the dragon and the active yang energy associated with it.

What-ever its true beginnings this festival is becoming more and more popular in Thailand.

There are many traditions regarding the Dragon Boat Festival, during the event, (which in China goes on for up to 3 days), people usually hang sprigs of aromatic plants, placed on the entrance to their homes. They include mugwort and calamus, both of which are readily available in Thailand and used in traditional Chinese medicine and perfumes.

You may also see others wearing perfumed medicine bags, or even “five color thread” around their necks, wrists or ankles. What does seem to happen almost everywhere, this is a time to indulge in Rice Wine (known as Sato in Thailand), apparently ……… only drunk as a way to prevent disease and misfortune.

The event is also known for the traditional Chinese rice dumplings called Zongzi, or simply zong in Chinese, while in Thailand and Laos they are known as Bachang or Khanom Chang.  Made of sticky rice, to which is added an abundance of different fillings, that can be either sweat or savory. The rice and ingredients are combined and wrapped in bamboo, reed, or other large flat leaves, with each leaf imparting its own unique aroma and flavor to the rice.

Although it may have originally been a seasonal food, these dumplings are available year-round in most Thai major cities, with a significant Chinese population. Making zongzi is traditionally a family event in which everyone helps out.

Dragon boat racing is now the most prominent and popular activity during the festival. The Traditional boats are, long, slim, open boats, made of teak wood that have been used in China for spiritual and competitive purposes for thousands of years. With the front shaped like an open-mouthed dragon and the other end with the tail.

The traditional craft would comprise typically of 50 paddlers, using single bladed paddles and pure muscle power, to drive the boat. There are also two other crew members, the drummer or caller at the bow facing toward the paddlers, and 1 sweep (steering the boat) standing at the rear of the boat.

Today’s Dragon boats however vary in length and the size of crew, from 10 paddlers for smallest boats, to the typical 22 crew members for the standard size boats.

If you are lucky to be in Thailand around this time and you find yourself, in city or town with a large Chinese community, then you are likely to see some if not all of these traditions. Do join in the celebrations as added to this fun and ancient event, is the natural good humour, you will find in all Thai people.