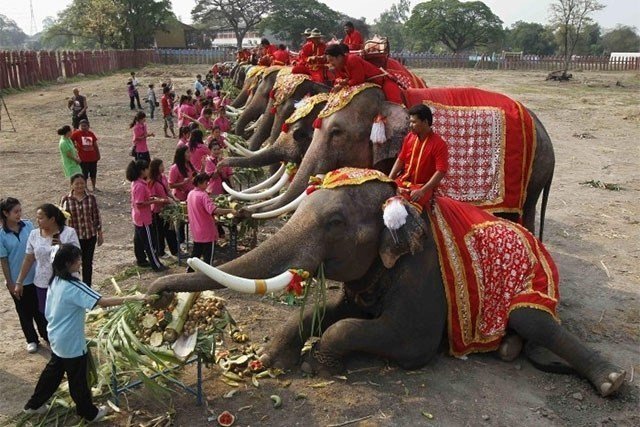 When: Annually 1st May

This annual event, has been running since 1996, it was once commonly advertised (Starting 1997), as a combination of an Elephant Buffet and a Jumbo Queen Contest. While the Beauty pageant featuring slightly larger than normal Thai ladies has come under fire, (it may now have been stopped totally), for portraying larger Thai women in a bad light, the annual contest still goes on…….so we believe!

The day is held to promote elephant conservation, with the heart of the show a mountainous “Jumbo Banquet”, consisting of over 6 tons of food, used to treat and honor these majestic creatures. This is the best time for visitors to get up close and personal with Thailand’s national symbol.

Throughout the day there are a number of elephant performances, show casing the dexterity and intelligence of these once working beasts of burden, along with shows featuring the parks newest and youngest elephants.

What else is happening

The day is jammed packed with an assortment of other activities including both today’s assortment of different music genre, by Thai bands, plus a selection of more traditional Thai folk music. Added to this are a number of dance performances featuring the unique cultural heritage of the region, along with Burmese folk music from Pathumrat.

This would not be Thailand if the event also did not have a whole host of vendors sell all manner of local handicrafts plus an assortment of local food and drink.

The Jumbo queen contest features a number of the Kingdom’s largest (human) females, who are judged on not only their size, (contestants have to be; 18 – 35 years old and weigh a minimum of 176 lbs), but also, their outward and inner beauty as well as how their personality represented the virtues of an elephant, with its imposing physical presence and kind, spiritual demeanor, elephants move easily through life where few barriers can hold it back, (with exception when they come into contact with man).

The winner will receive prize money but more importantly would then act, for the next 12 months as an ambassador for the country, in its struggle to save its elephants.