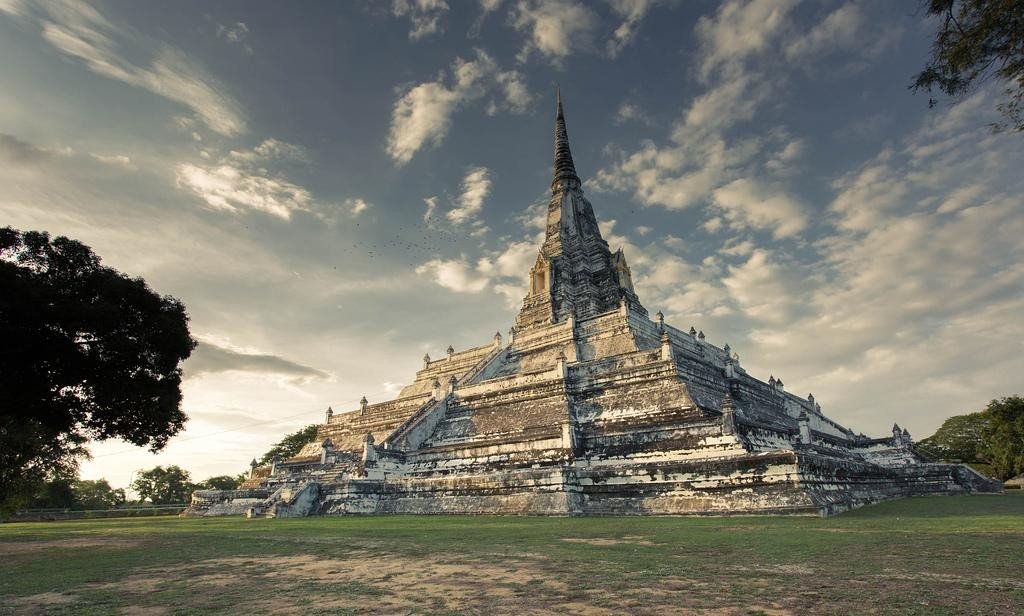 Wat Phu Khao Thong (or the Monastery of the Golden Mount)

If only these walls could speak they would tell an ancient story of, pillage, war, slavery and a nation reborn

WAT PHU KHAO THONG (วัดภูเขาทอง) of Ayutthaya. The location has had a long and at times bloody history, it is believed the first temple, was founded King Ramesuan in 1387, but was known by another name. Today there is a relatively new structure built on the remains of the ancient ruin. The foundations and part of the pillars of the old ubosot or ordination hall are still visible.

A brief The History of the Chedi

The History of the Chedi is intertwined with the history, of the people of the Kingdom of Ayutthaya and their bitter rivals the Burmese. Starting in the middle of the 16th century, the kingdom of Ayutthaya came under repeated attacks by the Taungoo Dynasty of Burma. The Burmese–Siamese War (1547–49) began with a Burmese invasion and a failed siege of the city of Ayutthaya.  A second siege (1563–64) led by King Bayinnaung forced King Maha Chakkraphat to surrender in 1564. The royal family was taken to Bago, Burma, with the king’s second son Mahinthrathirat installed as the vassal king.

In 1568, Mahinthrathirat revolted when his father managed to return from Bago as a Buddhist monk. The ensuing third siege lasted almost 3 long years and ended on the 30 August 1569, the conquering army ransacked the city taking many of its people back to Burma and slavery. The Burmese King Bayinnaung made Mahathammarachathirat his vassal king and ordered the building of a Mon-Burmese styled Chedi to commemorate their victory over Ayutthaya. The reluctant vassal king ensured the victory monument and the Chedi was never finalized.

The city was not to become a Thai stronghold again until 1584, it was then to withstand repeated Burmese invasions (1584–1593), capped by an elephant duel between King Naresuan and Burmese heir-apparent Mingyi Swa in 1593 during the fourth siege of Ayutthaya in which Naresuan famously slew Mingyi Swa (observed 18 January as Royal Thai Armed Forces day and remembered in the statuettes of Roosters you see all over Thailand).

Prince Naresuan (r. 1590-1605) had the yet to be completed monument converted to a Thai style Chedi in 1587 to commemorate Ayutthaya’s newly declared independence. While the Chedi was seen as the last monument to the former Burmese usurper King Bayinnaung, under Buddhist law the Chedi was not to be touched or defiled and so it remained for almost 200 years a thorn in the side of the local people as a reminder of Burmese occupation.

When the original Chedi finally collapsed, the Thai King Borommakot promptly had a new pagoda built more or less as you see today on top of the original Burmese base, but unfortunately just in time for the Burmese to attack again and completely destroy Ayutthaya.

The Chedi was recently completely restored and a huge statue of King Naresuan was installed on a marble base about 100 yards away, on the road leading up to the temple.

Climbing the original Mon-Burmese base, you are greeted with a view of the distant city of Ayutthaya, on a fine day you can spot the needles of Wat Phra Si Sanphet. On the north side, facing the new statue of King Naresuan, a cramped passage curves down and back up to the center of the Chedi, but without a light you won’t see anything.

A little on the Ayutthaya Kingdom (Wikipedia)

Ayutthaya (also spelled Ayudhya) was a Siamese kingdom that existed from 1351 to 1767. Ayutthaya was friendly towards foreign traders, including  the Chinese, Vietnamese, Indians, Japanese and Persians, and later the Portuguese, Spaniards, Dutch and French, permitting them to set up villages outside the walls of the capital, also called Ayutthaya.

In the sixteenth century, it was described by foreign traders as one of the biggest and wealthiest cities in the East. The court of King Narai (1656–88) had strong links with that of King Louis XIV of France, whose ambassadors compared the city in size and wealth to Paris.

By 1550, the kingdom’s vassals included some city-states in the Malay Peninsula, Sukhothai, and parts of Cambodia.

In foreign accounts, Ayutthaya was called Siam, but many sources say the people of Ayutthaya called themselves Tai, and their kingdom Krung Tai “The Tai country” (กรุงไท)