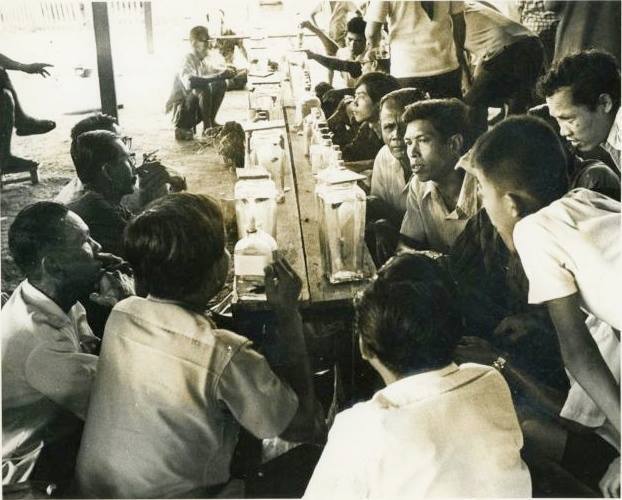 There is an old saying that Asian people love to gamble, so much so that when it rains, people will stop in the streets, to bet on the raindrops as they run down the glass, so why not…. Fish Gambling in Thailand

Asia is renowned for gambling

Thai Culture Fish Gambling. In Thailand, almost all gambling is illegal, with penalties of a max of no more, than 2 years imprisonment or a fine of no more than 2,000 baht. The two exceptions to the gambling Act are, the government-sponsored public lottery and two horse-racing tracks in Bangkok.

That said placing a wager, on what may be classed as rural sporting events, is still flourishing within the Kingdom, and where in the main, law enforcement turns a blind eye to a flutter. These sporting events can include all manner of creatures from, cock fighting, Siamese fighting fish and Bull fighting, with at times huge wagers placed on the out come.

A Little on this Unusual Fish

The Siamese Fighting Fish, colloquially known as the Betta, is a species in the Gourami family which has been popular as an aquarium fish for over 150 years. They are called pla-kad (tearing or biting fish) in Thai, where they have for centuries been used as a means of gambling.

While the male fish are the more territorial and aggressive, the females can be equally bad tempered. In Asia, they are often referred to as, “The Jewel of the Orient”.

At Home in Thailand

Native to the canals, rice paddies and floodplains of the Mekong basin of Laos, Cambodia, Vietnam and Thailand, this remarkable fiery creature has been able to adapt to the regions frequent storm flooding and devastating droughts, down in no small part, to the fact that they are a labyrinth fish. A labyrinth fish is one that would normally take in oxygen from its gills, but in addition has a special organ, known as the labyrinth, which allows the fish to breathe oxygen directly from the air.

This explains why they can sustain themselves in stagnant, oxygen-deficient water and why, they are often seen swimming solo in brandy sniffers and ornamental vases, in both the office and home through-out Thailand.

Due to environmental changes the species is now listed as Vulnerable by the IUCN.

Today’s fish have no real bearing on their forefathers, breeders have selectively bred various mutations of the fish to create an incredible array of, different, vibrant colours, patterns and fin types. The natural coloration of this 6.5 cm (2.6 in) long, aggressive fish is generally dull green, brown and grey, and the fins, of wild specimens are short.

Governance of the Sport

The sport of Siamese fighting fish has its own governing body; the closed and secretive  fighting fish society, which reports that “the traditional game” has been played for between 100-200 years in the Kingdom, and that the art of training these combatants has been handed down from one generation to the next.

In fact, the sport became so renowned in Thailand, that a former King of Siam, in the mid 1800,s had it regulated and taxed. The Siamese Fighting Fish, was not given its popular combatant name of Betta, until 1909, by Englishman Charles Tate Regan. A relatively short time after the fighting fish became popular in other parts of the world. The name is purportedly from an ancient clan of Asian warriors, called the “Bettah.”

The society has its own “very strict” set of rules to govern the sport.

“All games have rule, the fighting fish game has very strict rule. Since it is concerning with money and the pride. Each fighting ring does not set the rule difference much from other ring.  The player has to study the rule carefully. Difference rule imply difference style of playing. The player even has to know the habit of referee, since the decision-making is depending very much on the referee. The judgment of the referee is final. So the player must accept the referee’s decision-making. This means that no matter how many tricks you have, you must obey the rule and the referee’s judgment”.

It also states that “More experienced breeders and hardcore players are accepted and get respected by other players”.

An interesting item in their literature concerns Thailand’s Mia Noi (second wife) in which the Society state:

“In Thai fighting fish society we strongly believed that the breeder who has the second wife would never produce the best fighter.

An explanation behind this scene is, when man raptures the woman he would spend all his time with the woman and has no time for the fighter. When he went home, his wife would shout to him and they may quarrel. He may not feed and train his fighter well in the proper time.

Of course this environment is not good for the good fighter to living with. Keeping the fighting fish also make the man home on time. Because he has to feed and train his fighter in the regular time. The time to caring the fighter is around 16.00 – 19.00 hours.”

In the wild, Betta spar for only a few minutes before one fish backs off. Bred specifically for heightened aggression for fighting, organized Betta matches can go on for much longer.

Thai Culture Fish Gambling. This Wild Betta was sold at auction in 2015 for 60 USD

As with the very popular cock fighting and bull fighting (which are viewed by the government as part of Thai culture and where huge wagers are won and lost), winners are determined by a willingness to continue fighting. Once a combatant retreats, the match is over.

And there you have it, a bloodless sport that has been played out for centuries, governed by a secretive society and where the authorities turn a blind eye on the odd flutter.