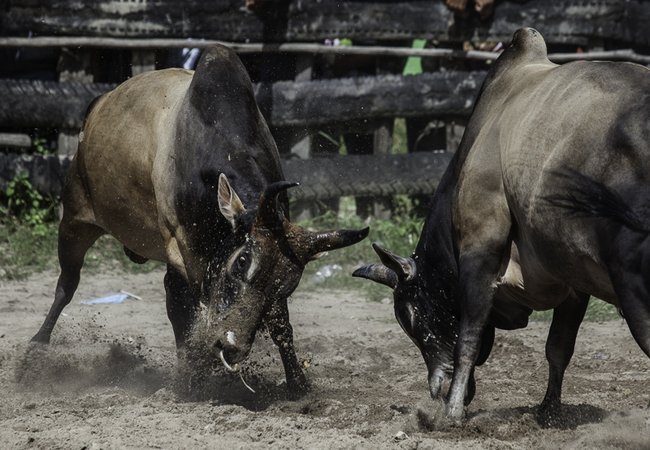 Thai Culture Bullfighting, Bull Fighting is not something you may have associated with Thailand but it is a very popular event in the Southern provinces, the largest events are held over the traditional public holidays of New Year and Songkran and are staged in both purpose built stadiums  or simply on cleared open farm land. This bloodless past time has spread over eons to provinces in the north such as Kamphaeng Phet, Sukhothai and Phitsanulok.

This form of fighting is nothing like the bull fighting of Latin America or Southern Europe, here it is more of a clash of wills along with the thunderous clashes of horns and fore-heads of the male Water Buffalo, which brings the audience to their feet and not the murderous intent of a matador.

In this ancient gladiatorial sport, the animals are not maimed and killed to satisfy the blood lust of the crowd, nor is there a desire to see the animals suffer, in this competition it is down to one of the two 600kg, testosterone fuelled buffalo’s, in their natural desire to be the ‘Boss’ to win the day, by encouraging their opposite number to turn tail and run away.

While I appreciate there are going to be those that will call it barbaric, rural Thai’s see it as a traditional sport and part of their way of life, it is also where they have the chance to win both money and prestige. It is believed the ‘Sport’ has been around for almost as long as these huge beasts have been working for man. The first animals are believed to have been domesticated in India some 5,000 years ago.

While in 1996, there were thought to be as many as 3 million Water Buffalo’s in the Kingdom of Thailand, this dwindled to less than 1.24 million heads in 2011, this is in part due to the use of tractors, to do the work once done by these great beasts of burden. (Tractors are actually called ‘iron buffalo’ in Thai). Statistics indicate that by the beginning of 2012, their numbers dropped again and it is believed, there were less than one million in the country, with slightly over 75% of them being found in the Kingdom’s poorest north-eastern region. It is also believed there are still 40 – 50 wild buffalo, living in the Huai Kha Khaeng Wildlife Sanctuary.

Today’s buffalo contestants are not likely to be found toiling in a paddy field, but are more likely to be seen spending their time doing nothing more than grazing and being pampered by their owners, as a winning bull could be worth a small fortune. (Their large hoofs and flexible foot joints, along with their slow gate, centre of gravity and strength make them ideal for pulling a plough).

More about what goes on ‘Fight Day’

Before we start on what happens on fight day, it is important for people to understand that for centuries, Thai rural life has revolved around the rice planting and the harvests seasons, that the people have a deep respect for their buffalo, as with-out them their already hard existence would be made even more difficult. These normally gentle giants are called ‘Ai Tui’ which literally translated means ‘Honest Royal Worker’

The bulls are paired off prior to each bout to ensure each combatant is of the same size and build and equally as importantly they have the roughly the same shape and size of horns, this is done to ensure the bouts are fair and to reduce the harm the horns can do to either animal.

Before the bout starts the buffalo’s are blessed by the waiting monks, the two at this time placid animals are led by their noses into the arena and paraded in front of the audience. The two bulls then start to stomp and paw the ground, kicking up dust and earth in an attempt to intimidate their rival and to show just who’s ‘Turf’ this really is.

Like heavy weight boxing champions they are taken to neutral corners by their owners and helpers and sponged down, their gloves (horns) are checked from there the bulls are ready to be led to the middle of the arena where they meet for the first time face to face at which point the nose tethers are removed.

The noise from the crowd changes from a din to a riotous cacophony of shouting, whistles and clapping, along with frantic gestures, as the ring side fans try to place their last bets on who will win. Gambling while illegal in Thailand seems to be everywhere on the day.

The two mountains of beef are now nose to nose, the noise from the passionate crowd somehow becomes even louder as they urge the beasts into action. Its then that the bulls instincts take charge, there comes the dull thud of bone on bone and the unmistakable clatter of horn on horn, as the two bulls change from the domesticated docile animal to a ‘King of the Ring’

This mayhem of noise spurs on both the animals and crowd alike, the crowd is now whipped to a frezy, there follows a period of pushing, shoving with lots of snorting, (and not just from the crowd), the weaker of the animals will eventually decide enough is enough, turning his back on the champion, it gives up and trots away. That’s it, it’s all over bar the shouting from the winning fans and the sight of the winning buffalo ‘Strutting its Thing’.

While there are only a few bouts during the day, you quickly began to appreciate this is not all about two beast of burden, simply head butting one another, it is a special day, for the local people to share a story and a joke with family and friends, and at the same time wager a few baht on their champion. The whole day is one of a carnival atmosphere with plenty of food and drink sellers plying their goods to so many willing customers.

Each bout does not last for very long, the duration is all down to the willingness of the buffalo’s to strut their stuff and fight. From my prospective the fans seemed more out of breath than the animals at the end of each bout and the owners, their helpers and the officials who stay inside the ring during the bouts are more likely to suffer an injury than the bulls themselves.

One thing is for sure the collective mayhem of both the beasts and the crowd fills your senses, you find yourself drawn into the atmosphere and excitement of the event. I sat there watching all this with the strange sensation that I was witnessing the past and could just imagine the same scenario being played out centuries before.

If you want to witness a bloodless pastime, that has been going on for centuries in Thailand, and you want to witness rural Thai people indulging themselves in something they so obviously enjoy, then keep your eyes open if you are in the South of the Kingdom, for the occasional road side banner or check out the stadium web sites. One thing is for sure this is not a barbaric sport, I have seen more injuries and blood at a Muay Thai event than I have witnessed in Thai Bullfighting.