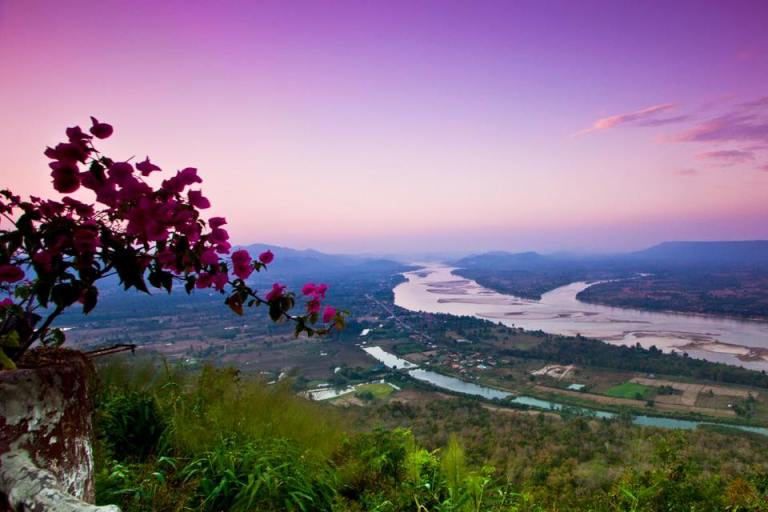 Mekong River. Each year around the end of Buddhist Lent, along a stretch of the Mekong River, close to a sand bar which looks vaguely similar to a scaly Naga, you can with luck and only after sunset witness the mysterious Naga Fireballs.

These glowing orbs naturally rise from the water and are said to be reddish in colour and to range in size from smaller sparkles up to the size of basketballs. These strange balls of light, reportedly quickly rise up from the river to a couple of hundred metres, hang there for a few seconds before mysteriously disappearing into the night’s sky. What is more surprising is that there is no sound, no smoke, and no fragments from the fireballs have ever been retrieved.

Naga fireballs (Thai: บั้งไฟพญานาค; rtgs: bang fai phaya nak), also known as Mekong lights, and “bung fai paya nak” by the locals. Thai folklore holds the Naga to be semi-divine, demi-creatures, looking like a Chinese Dragon, which possess supernatural powers as has been described in both Buddhist and Hindu cosmology.

The number of fireballs reported over the many years varies between tens and thousands per night and have been explained as all many of conjecture; from  plasma physics: A free-floating plasma orb to a result of flammable phosphine gas generated by the marshy environment, to Laotian soldiers firing tracer rounds into the air across the river.

Whatever the real reason for this annual display, Thai people in the northeast, especially in the provinces of the Mekong river, have believed for generations that the River was the route of the Naga King “Pu Chao Sri Sutho”, who crawled around the mountains and who still resides deep beneath, the Mekong River in the underwater city of Muang Badan.

View from Wat Pha Tak Suea of the Mekong River

Legend of the Fireballs

Folklore tells of days past, when on the last day of the Buddhist Lent, villagers located near the river, would float their fire-boats as a mark of respect and tribute to the Lord Buddha. They did this by placing torches made from insect waste collected from nearby trees onto their 20 – 30 meters long bamboo boats to illuminate them. (See more on today’s Fire Boat Procession)

In order to make their boats look more spectacular, some villagers would fire small Bang Fai (rockets) and the circular Bang Fai known as Talai into the night’s sky. It was then in times almost forgotten that a curious incident occurred – Bang Fai were fired, as if from under the water and as if the Naga King wanted to join in the event. While this story has been handed down for centuries the phenomenon has occurred every year since.

Views from a Glass Walkway

For the best views of this strange event, get yourself along to the glass and metal walkway situated near the mountain top temple of Wat Pha Tak Suea (วัดผาตากเสื้อ) or Temple of the Beautiful Mountain View, in Sangkhom District. Nong Khai Province.

With its sixteen meters long, U-shaped sky walk jutting six metres out from the cliff, this new vantage point, which opened in 2016, gives those with the stomach for heights a clear view of the valley 550 metres below and has already been dubbed the most beautiful sightseeing spot in the province

The uninterrupted views provided by its glass walls and floor, gives those willing to put their lives in the hands of the gods, unparalleled views of the shear drop to the valley below, the nearby Mekong River and the neighbouring country of Lao.