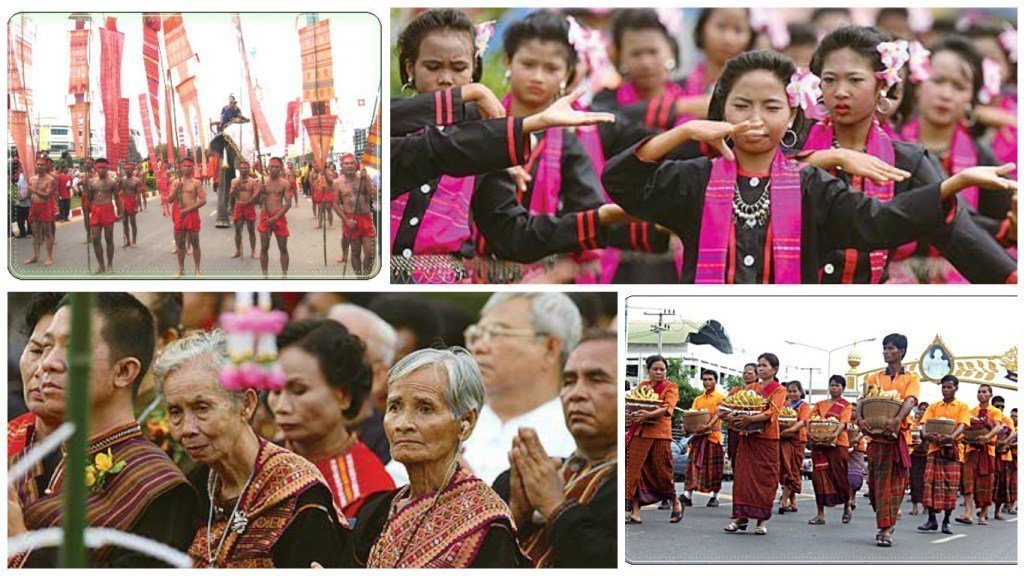 Watch the ritual to respectfully invite spirits of  ancestors, an offerings contest, Khukhan Banana contest, Kao Tom Mud contest and a local colourful parade. Plus a number of different local cultural performances and of course as this is still Thailand, there will be a whole host of vendors selling local produce and handicraft and the famous Pisang Awak bananas and other kinds of bananas grown in the province.

Added to this event (from 19-21st Sept), is the moving and beautiful tradition that embodies the people of the region, their centuries of contact with their Cambodian neighbours and a time to remember those lost in the Killing Fields. That of the San Don Ta Festival

A Short Early History of the Province

The many Khmer ruins found in the province show the area was important to the Khmer empire at least by the 12th century, although it was apparently sparsely populated. According to local tradition, it was known as Sri Nakorn Lamduan (ศรีนครลำดวน.) It was later called Khukhan, after a town built in the late 15th century CE during the reign of King Boromaratcha III of Ayutthaya. Who would later appoint the first ruler of this new region; Phraya Krai Phakdi Si Nakhon Lamduan (Ta kacha).

In 1786 the town Sisaket was formed, being ruled still by Khukhan. In 1904, Sisaket was renamed Khukhan, while the original Khukhan was designated Huai Nua; an administrative subdivisions of Thailand.

Udon Thani was created in 1912, and assumed the administration (Monthon) of the most of region. In 1933 the monthon system was ended, and the province of Khukhan was administered directly from Bangkok. Five years later, the name of the town and province were restored to Sisaket, with the district containing Huai Nua being called Khukhan.