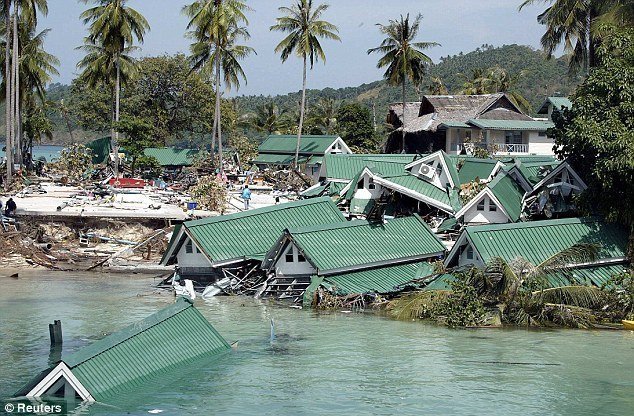 Thailand Tsunami 2004 Today, Boxing day 2004 Thailand suffered one of the most horrific disasters in the history of mankind. Many people were the victim of one of the most powerful aspects of nature, the Tsunami. Today we remember the victims of that fateful day back in 2004. RIP.

This deadliest tsunami 2004 caused by a 9.0 magnitude earthquake, killing more than 250,000  people in a single day is the most devastating tsunami in modern times, traveled 375 miles (600 km) in a mere 75 min. That’s 300 miles (480 km) per hour, leaving more than 1.7 million homeless affecting 18 countries. Tsunami is an ever-present and real threat for the these islands of the Indian Ocean due to the presence of a tectonic interactive plate. These reviews may help national, regional, and international organizations to prevent such events from occurring again in the future.

The December 2004 earthquake released about enough energy to power the United States for six months, or put another way, it generated the equivalent of a 250-megaton bomb shaking every point of the earth an inch or more. The associated shifts in the ocean floor displaced enough water to fill a tank 1.6 kilometers wide, 1.6 kilometers high and more than 11 kilometers long. The Los Angeles Times reported: “Miles beneath the waters of the Indian Ocean, a massive piece of the Earth’s crust had heaved, buckled and shifted. Along a fracture zone hundreds of miles long, it moved, releasing pent-up energy equivalent to the power of more than 1,000 atomic bombs. The waters above reared up and crashed down, creating a wave that was now racing across the ocean at 500 mph…The records of history and evidence encoded in coral reefs show that tsunamis have hit the Indian Ocean seldom but with great force.