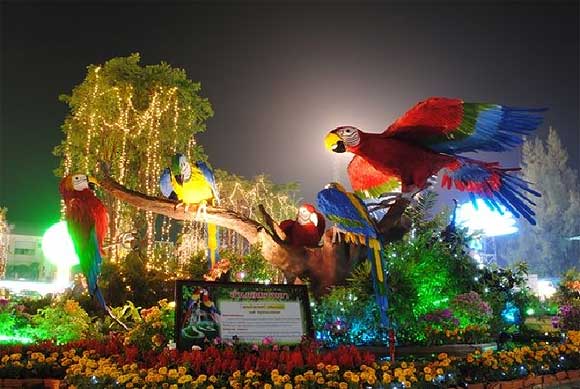 Straw Bird Fair 2016 Thailand. This annual event is awash with colour & noise. This is your chance to see get closer to the real Thailand and share with its people their sense of fun and their desire to keep their culture alive

When: Annually in February (2016 dates not yet released)

Straw Bird Fair 2016 Thailand. The events full name is Straw Bird Fair, Chai Nat Product Fair & Red Cross Fair. This relatively new fair was first held in February 1986; it is still going strong some 30 years later and is to promote both the Chai Nat Bird Park and the local people’s desire to preserve their culture and history. It has now become one of the major festivals for the province.

These at times huge, but always intricate and brightly coloured life like straw birds, (the straw is a by-product from the rice harvest which ends around the same time) are show cased both within the confines of the Bird Park and in front of Chai Nat City Hall. Later they are perched onto equally elaborately decorated floats and then paraded around the city accompanied by musicians and people in traditional Thai dress, all to the huge delight of the onlookers.

Local craftsmen and students work long hours to compete head on in this eagerly awaited annual competition, held normally during the Chinese New Year. The judges have to decide on a number of categories; which Straw Bird is this year’s best Hi-Tech (some can move and sing) and the most beautiful large and small Straw Birds with the winners receiving prizes and the honour of being the year’s best in each category.

The festival is not all about the pageant of these magnificent Straw birds it is also in part a spiritual event, where the local people show respect to the image of Suk Reverend Grandfather; Luang Pu the former abbot of the temple at Wat Pak Khlong Makham Thao, he is still held in high respect by the local people, for his legendary expertise in charms and spells. (The monk passed away in 1923). The festival also incorporates the ceremony to appease the ‘City Pillar’ Lak Mueang (Thai: หลักเมือง)

Through-out the festivities there are numerous live performances and exhibitions displaying the diversity and cultural history of the province, along with stalls selling both local produce and handcrafts and of course as you would expect here in Thailand there are a vast array of vendors selling a myriad of delicious Thai food dishes to savour.

A real treat for the true ‘Birders’ the park was established in 1983 and now covers an area of over 260 rai. It is recognised as the largest aviary in Southeast Asia and is presently home to 200 species of birds. The Bird Park, also offers a snake and rabbit farm, (thankfully not side by side) along with manicured and lush gardens to explore, 4 large ponds on which you can hire a swan shaped peddle boat, along with man-made waterfalls.

There are of course food and drink facilities along with souvenir stalls dotted through-out the park as are many huge life like figures of animals and birds. There is also now a fresh water aquarium displaying Thailand’s most endangered species and a science and planetarium where you can watch 3D films of the universe projected onto the domed roof. If that was not enough there is also the daily ‘Monkey Show’ organised by the Pakit Circus.

Other Things to do and see in Chainat

The city was first founded in the 12th Century, while the province is known as an important rice bowl for Kingdom, it has also has the well-earned reputation for the high quality of the products it produces from its ever growing cottage industries, including ‘Herbal Shampoo Products’ made from local Kaffir limes, soapberry, aloe, butterfly pea and Turmeric, along with such handicrafts, as basketry, reed mat and bamboo weaving, water hyacinth woven products and quality pottery ware. As well as the intricate craftsmanship that goes into producing the individually hand painted, traditional Thai design ceramics, that is ‘Benjarong Pentachrome’ (literally meaning 5 colours)

All these products can be found at the festival and around the city in both stores and in the homes of the craftsmen and women. If you are lucky you may well get the chance to see the local people actually hand making these highly sort after products.

There are over 10 temples, varying in size and splendour  to explore along with the Chainat Muni National Museum and both a crocodile farm and monkey park.

There are three rivers running through Chai Nat – the Chao Phraya, the Noi and the Tha Chin, with each offering river cruises where you can sit back and sedately take in the scenic views that engulf you and observe first-hand the rustic lifestyle of the riverside inhabitants.

“The festival is certainly worth a visit as there is so much to see and do in the city of Chai Nat and as always the Thai people of the quieter provinces have a true spirit of fun and friendliness that can be seen in both the warmth of their smiles and humour in their eyes. One thing is for sure you will always find a genuinely warm welcome on your adventures into this part of the Kingdom of Thailand”