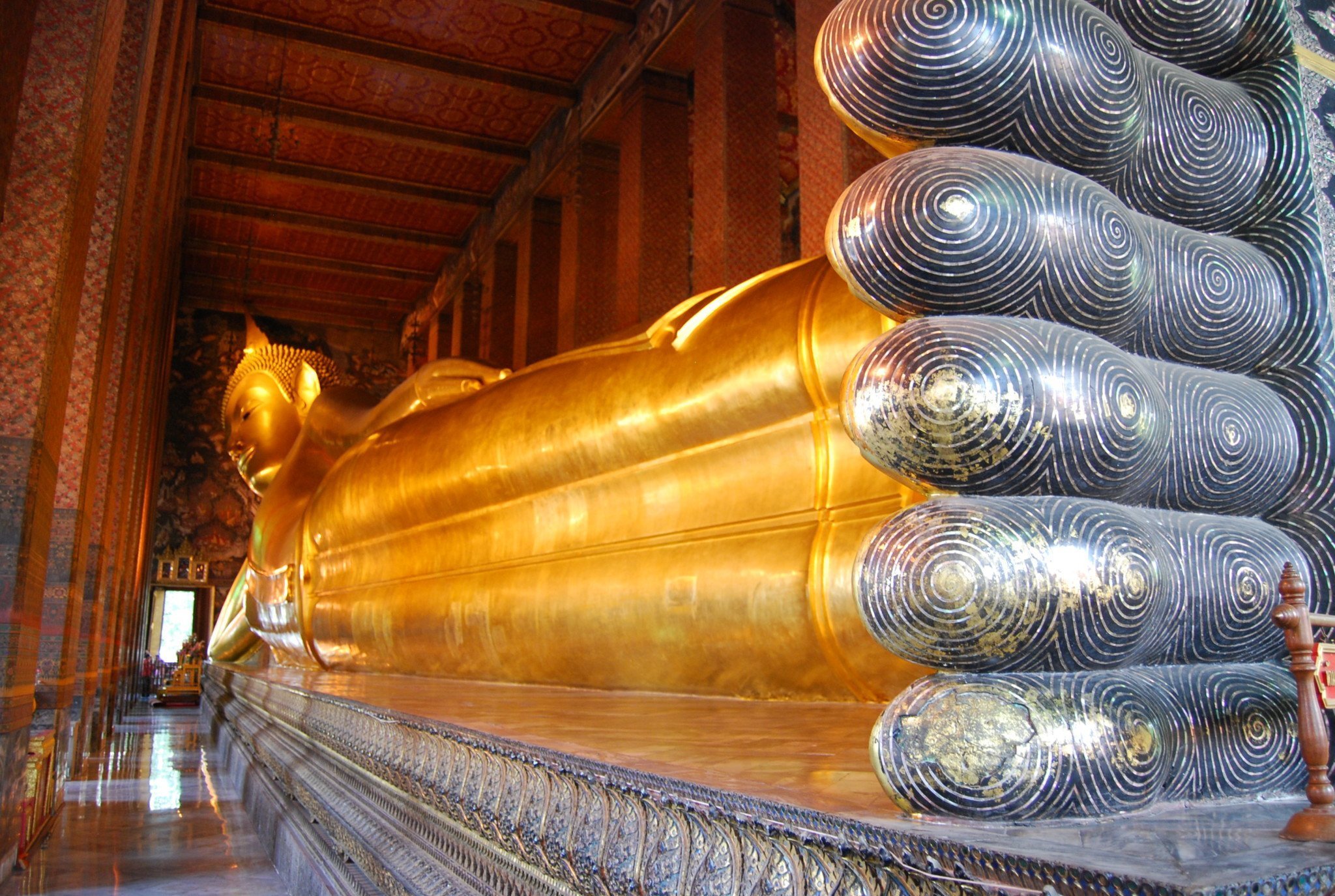 While all tourists to Bangkok agree that the Temple of the Emerald Buddha (Wat Phra Kaeo) in the Grand Palace is the city’s finest temple, it’s Wat Pho which remains the favourite of most visitors. This ever-colourful attraction; “gorgeous, not garish” as one famous visitor said, has made its way into the hearts of generations of travellers.

Wat Pho is a place of superlatives. Not only it is the largest religious site in Bangkok, it’s also the oldest and has been the setting for great events in the kingdom’s history. These days it’s regarded as a showcase of Thai craftsmanship and one of the jewels of Rattanakosin Island.

The temple attracted devotees well before the tourists came. The oldest structures date back to the reign of Rama I the Great of Thailand (then known as Siam) when it was called Wat Phodharam. The king renovated the temple and brought important Buddha images from Ayutthaya; 1248 in all, many of which remain to this day. King Rama III further expanded the temple and established it as a centre of learning.

For visitors to crowded Bangkok, it’s the tranquil vastness of Wat Pho that appeals. While hundreds of people surge daily through the main gateway, the spires, stupas and salas soon swallow them up. Some days you feel you’re the only person wandering the lovely courtyards other than the occasional cat or student from the temple school. But you’re always being watched for the temple is home to granite guardian statues (Lan Than) representing warriors demons, hermits and animals. These dramatic statues were brought from China, as ballast in rice junks and they decorate every corner. Look out for statues that flank the Marco Polo Gate near Wat Pho’s entrance. Menacing in their top hats, the giants represent the first Western visitors to visit the East on trading missions. They look like a fierce comedy duo and draw you into the rest of the temple to explore, as they once did.

Wat Pho has all the elements of a traditional Thai temple, Ubosot(with a stunning seated Buddha), Salas and a bell tower but it’s the sumptuously delightful details and breath-taking colours that impress. Every surface is adorned with gorgeous ceramic tiles, artistically arranged as flowers, giants, mythical creatures or simply beautiful abstract patterns. Even the modern lampposts are decorated in the same way. It must have been painstaking work to create, and if you’re lucky you can see talented craftsmen renovating the art and keeping things glittering.

Most people come to see Wat Pho’s best known, certainly its biggest sight, the reclining Buddha image. Housed in its own impressive Vihan, the colossal statue is 15 metres high and just over 43 metres long and its gold covering shimmers divinely in the light from the windows. The statue’s so long that it has to be appreciated section-by-section, divided by the roof pillars. “You can’t see all of him at once” said Fowler, the main narrator of Graham Greene’s The Quiet American, his way of explaining how god appears differently to everyone. Spend time admiring the soles of the statue’s feet inlaid with pearl, which display the 108 auspicious signs of a true Buddha.

So captivating is the reclining Buddha that it’s easy to overlook the other, artistic flourishes in the vihan, and they’re worth seeing. Murals of Buddhist cosmology climb high into the building’s eaves, where only their creators could ever have really seen them. It’s this meticulous attention to detail that epitomises the artistry of Wat Pho.

Other murals in Wat Pho show energy points and therapeutic pathways in the body for the temple has long been a centre of teaching in the ancient art of Thai massage. The temple school and others in the area were founded to preserve this centuries-old practice and instruct new masseurs. So make sure you end your temple tour with a traditional and vigorous massage. There can be no better souvenir of your visit than the feel-good flexibility and energy that comes from having a good Thai massage. And it’s a guaranteed way of carrying a memory of Wat Pho round in your muscles for the rest of the week.

Wat Pho is on Sanam Chai Road next to the Grand Palace.

Tourists are asked to dress politely.