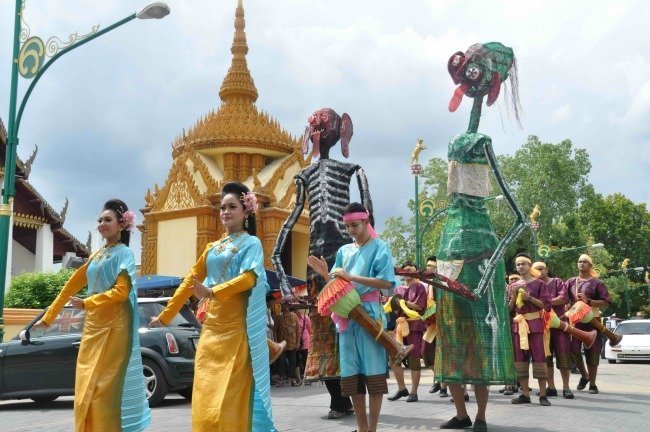 This ancient festival (also known as the Bun Festival and Red Cross Fair or Tham Bun Duean Sip งานเทศกาลทำบุญเดือนสิบ),  is a thanks giving custom and is a time for the Thai people of this province to make merit and give offerings to the monks, spirits such as the Rice Goddess Mae Posop and deceased relatives. While this time of the year, prior to the new harvest is celebrated across the country and goes by many different names, here in the southern provinces the event is regarded as one of the most important festivals of the year, no more so than in Nakhon Si Thammarat. where the tradition has evolved into possibly the biggest festival of its kind in the Kingdom.

In eons past, this time of year was called simply the ‘First Planting’ or ‘First Rice’, later local Beliefs across the Kingdom were infused with the Hindu religion and the event took on a part of the Hinduism tradition of the  ‘Pali’, Sarada Merit Making ceremony (‘sarada’, meaning “autumn season”) in which a rice pudding called Kheer is offered to Ganesha the elephant god.

It is at this time of the year when crops are at their most bountiful, that the local people believe that the spirits of their ancestors return to this world to feast with their living relatives. These spirits are only allowed to meet their relatives for 15 days and must return to from where they came before sunrise of the 15th day. Here on the beginning on the 13th day, people will go shopping for food to be given to their ancestors, the following day is spent preparing and decorating the floats that will be used in the upcoming parade. Finally on the 15th day the living try to appease the spirits by taking food to temples to make merit.

As part of the celebrations there is a large and colourful procession along Ratchadamnoen Road, featuring a mass of floats and individuals carrying images of demons and food offerings, dancers in traditional costumes escort the parade and the area is alive with musicians and dancers competing in competitions, along with a variety of folk displays and handicraft demonstrations and of course plenty of stalls selling delicious local food and drinks

A ‘snatching demons’ custom is observed during the festival, whereby baskets of food cakes are laid down as a food offering to ancestral spirits. Once the baskets are placed onto the floor, throngs of people rush in and snatch the food, this mad stampede is known as ‘snatching demons’

Similarity with other festivals in Thailand

Another common thread of these festivals is the food that is offered to both the spirits and the monks. The major dish is “Krayasart” prepared from sticky rice, bean, sugar and sesame which is cooked into a paste and then wrapped in a banana leaf. Others are Kao Pong, Kanom La, Kanom Kong, Kanom D-sum, and Kanom Ba. All of them are made from rice, sugar and coconut milk. These foods are prepared with the belief to be in favor of the ancestors and the holy spirits.

This Tenth Month Merit-Making Custom is also practiced among the people the Tai-Lao (Sino-Tibetan) speaking people outside Thailand and among the Khmers, Mons and Myanmar

What-ever name it is known by, the essential message remains the same: To offer first seasonal farm produce to gods and ancestral spirits as well as offering food to the monks, in the hope of securing an abundance of food for the season that follows.