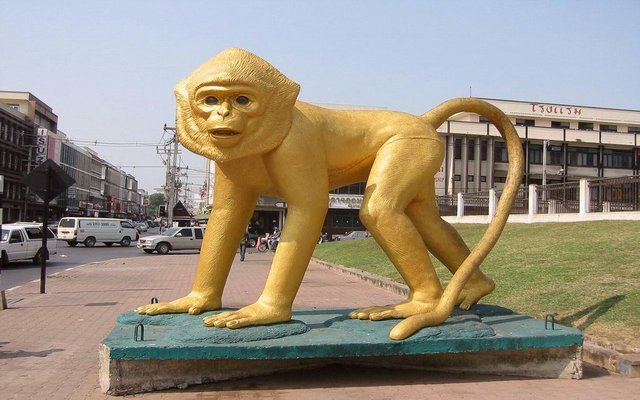 Where: Lopburi City in the Lopburi Province (also known as Lavo, Lavapura, and Luovo)

One of the few almost non spiritual and one of the most recent annual events to be added to the social calendar of the Kingdom of Thailand is that of the fun filled and somewhat bizarre ‘Monkey Buffet Festival’ (the first festival only took place in 1989). It is held near the Khmer temple of Phra Prang Sam Yot near the railway station in the Old Town of Lopburi, aptly nicknamed “the city of monkeys,” If you get the opportunity do check out the temple as it is a great example of the architecture from the Angkor/Khmer Empire. Admission to the Temple is 150 Baht. 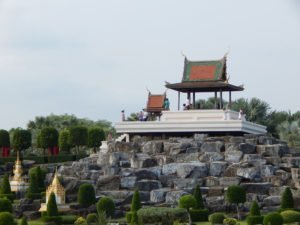 The Monkey Festival attracts 1,000’s of tourists each year, far more than the estimated 3,000 wild monkeys but this combination of man and ape does make for a hilarious day. The local architect of this festival Khon Kitwattananusont tries each year to outdo the previous year’s festivities and has in the past opened the festival by parachuting into the grounds dressed as a monkey. 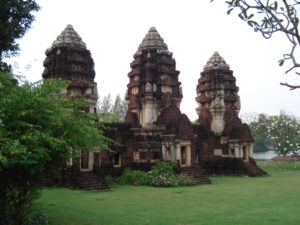 Each year over 4,000 kilos of food is provided, as a feast for the long tailed macaques to eat. The food is laid out on tables, in a true buffet style, with the local chefs spending many hours lovingly preparing the vegetarian food, including delicious choices of prepared fruit salads, fruit carvings, sticky white rice and even traditional Thai desserts made from egg yolk.

The monkeys are quite use to interacting with humans, but they can get aggressive when feeding, you have to be on your guard with valuables (including your glasses) as they are inclined to snatch things they believe maybe edible.

As with almost all festivals in the Kingdom there will always be a mass of varied activities during the day’s celebrations, include merit-making and charitable activities in temples,  along with a vast variety of stalls selling local and regional Thai cuisine, including the obligatory OTOP products. There are also many musical performances on hand featuring the ethnic culture of the region, along with many other fun-filled, displays and contests in this carnival atmosphere.

If you plan your trip in advance you could also catch the annual Lopburi Symphony playing in the town the day before i.e. 26th November 2016, when once again King Narai’s Palace, officially known as Phra Narai Ratchaniwet located in the old center of Lopburi town plays host to the annual “Chom Wang, Fang Dontri” ( live band performance), featuring the National Symphony Orchestra, plus a number of Thai artists.

Most of the music is scheduled for the evening, when the old ruins bathed in subtle lighting are used as a wonderful back drop, that said the day has a number of traditional cultural and music performances.

The province is located in central Thailand with the city being approx. 154 kms north of Bangkok. There is historical evidence to suggest that the city has been continuously inhabited for around 3000 years, making it one of the oldest cities in the Kingdom. Formerly known as Lawo, Lopburi had for centuries been ruled by several Kingdoms, until the 14th century when control was taken by the then Siam. The many artefacts uncovered in and around the area point to a colourful if some-what turbulent past.

Travelling in Lopburi: While there are plenty of Songthaew’s running along Wichayen and Phra Narai Maharat Roads connecting the old and new towns, (the cost is 10 baht per person) it is not that far a walk and the best way to see the two towns is on foot. City buses are also available. At a costs of 4 baht per passenger. Samlors will go anywhere in the old town from 30 to 50 baht. Most of the ruins are scattered about the train station in the old town.

Lopburi is perfectly located for an overnight or weekend trip from Bangkok or why not build it into your itinerary and stopover on your way to or from Chiang Mai or Chiang Rai in the north or Udon Thani in the north east and thereafter to Lao and Vietnam. In my opinion the journey time from Bangkok and the abundance to do and see means it is not a ‘Day Trip’

Thailand Festivals Lopburi Monkey Buffet. Local Food to look out for include:

Khai Khem Din So Phong (Marl Salted Egg). This is a famous souvenir of Lopburi and is a food preservation method for eggs. It is achieved by coating the raw egg in a mixture of marl, water, sugar and salt. Once the coating dries the egg is then preserved, the egg once eventually used can be incorporated in all manner of dishes or simply eaten, boiled or fried. The flavour is quite mild but distinctive and is not very salty. Adding Din So Phong (The locally produced marl, widely considered the best in Thailand) to the process makes it even more unique as it is a food preservation method that is only found and produced in Lopburi.

Coconut Jelly is another well-known souvenir of the province, it is produced as a dessert to be eaten with ice. The jelly is produced by fermenting coconut juice with the acetic acid microbe similar to that used in the vinegar preserving process. During the fermentation process, white fungi will float on the surface and gradually assemble into a group of mushroom-like jelly. This jelly is called “Coconut Juice Jelly Mushroom” or “Coconut Jelly”. The jelly will be later combined with various syrup flavours and then bottled ready for sale. Don’t let the description on how the Jelly is made put you off as the finished product is lovely to taste and is prized by most Thai’s.

The province is also known for its:

Brass Metal Casting and Khao Phra Ngam Diamond (While not a true diamond they are in fact various coloured quartz crystal that can be polished and set in jewellery).

While in the province why not make time to see the vast fields of Sunflowers grown in hundreds of thousands of rai through-out the province. Before the harvest in January, the flowers create a vast ocean of yellow which appears to go on forever. Many farms provide for people to tour their farms, by tractor or indeed elephant and offer all manner of products made from the flowers.

How to get there from Bangkok:

By Train:
Bangkok-Chiang Mai trains leave Bangkok’s Hua Lamphong Railway Station at 7.05 a.m. and 8.30 a.m. Both are third class only. Rapid trains leave the station 5 times a day (Travel time is 2.5 hrs.) For more updated schedules and reservations, clickhere. For more details on why you should consider travelling by train in Thailand see my post.

“All in all this is one of my favourite festivals as it is easy on the eye and the pocket and is a perfect opportunity to get some great pictures of these intelligent, artful animals at play. The day is a mass of colour, noise and is a day fall of smiles”. 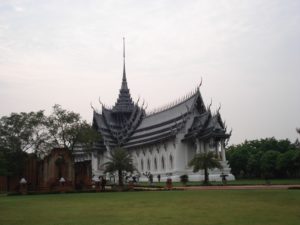 For more of what to see and do in Lopburi click here.