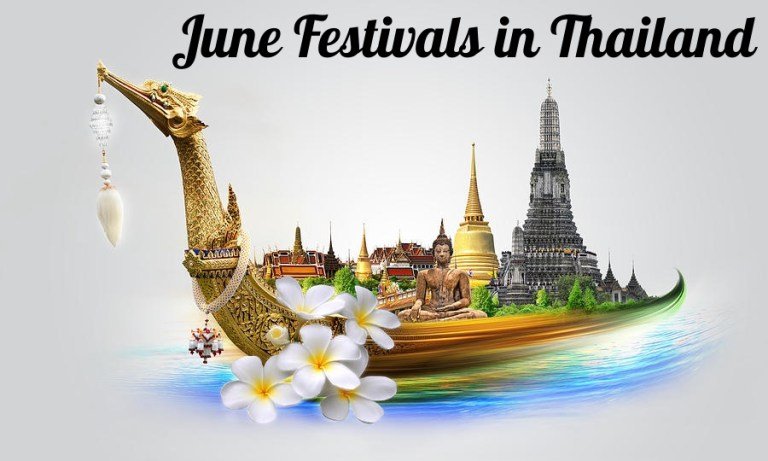 Thailand Festivals June 2017. There are dozens of  festivals across the magical Kingdom of Thailand in June, listed here are just a few of the less known and on the whole less flamboyant events, while possibly not on the radar of most visitors they are certainly worth visiting if you are in the neighbourhood and want to get closer to the real Thailand.

The Phi Ta Khon Festival, sometimes known as the Ghost Festival, is the biggest attraction in this otherwise mainly farming community and while the days normally simply float past the sleepy district and town of the same name, Dan Sai, once a year erupts into life with the unique and magical Phi Ta Khon Festival

Where: The town of Dan Sai, Loei province. North-Eastern Thailand

The town of Dan Sai is nestled in what is sometimes referred to as the Thai highlands, with both the Phu Hin Rong Kla National Park and Phu Luang Wildlife Sanctuary on its doorstep.

While this world renown Isan Festival is peculiar to Dan Sai, it does combine elements of the other equally well known Isan event, the Bun Bang Fai, rocket festivals which literally explode all over the region in  June each year. The biggest and strangest being the Yasothon Rocket Festival, which has some of the same sexual undertones as the Phi Ta Khon Festival.

The date of the three day The Phi Ta Khon Festival, (also spelled Pee Ta Khon (Thai: ผีตาโขน), was once selected annually by the town’s mediums. This is not uncommon in the Kingdom, (see our post: Thailand Holidays and Festivals Calendar Explained),with the dates of some events not known until a few weeks before they start, thankfully today’s visitors only have to look to the Thai lunar calendar, in fact to the first weekend after the sixth full moon (see so much easier!).

The fair is held every June to celebrate the locally grown fruits including rambutan, durian, lanson, mangosteen, and the revered if ever so smelly stink beans. On the opening day there is a ‘Fruit Parade’ featuring floats covered in mouth water local produce and an array of dazzling colourful flowers. Through-out the duration of the fair you will find numerous agricultural exhibitions, and not forgetting a fruit tasting caravan where you get the chance to try some of the many different tastes that make up this fair.

A traditional Thai agricultural fair where local farmers have the opportunity to show off the best vegetables, plants, and all manner of agricultural products, with contests for best in category. There is the almost obligatory beauty contest, an agricultural vehicle parade along with an army of people selling locally grown and hand made products along with farming demonstrations, local traditional dancers and musicians.

Where the cities spirits are taken by land and sea, to enable the local people to gain good fortune in their every-day lives

Each year the people of this Bangkok Metropolitan Region, hosts the annual celebration for its Chao Pho Lak Mueang. With most of the activities centered around the City Pillar Shrine near the Tha Chin River embankment in front of the City Hall.

Lak Mueang are City pillars, found in most cities of Thailand. Usually housed in a shrine which is also believed to house Chao Pho Lak Mueang, the city spirit deity; they are held in high esteem by local people. The Thai, Chinese and Mon style Lak Mueang, in Samut Sakhon is regarded as the oldest Ganesha shrine in Thailand

During the four day event the “Chao Pho Lak Mueang” will be placed on a fishing boat, which has been beautifully decorated with flags and flowers. The boat will then set off along the Tha Chin River calling into the Suwannaram Monastery and then on further to Wat Chong Lom, to enable local people to pay respect and in return gain good fortune. The procession by land will also follow.

When: Annually in June (Dates TBA)

This annual event now in its 3 year  aims to  introduce ornamental fish to both the general public and foreign buyers. Along with providing in depth knowledge on the subject, there will be on show rare and exotic breeds such as the Pearl Stingray, Black Diamond Stingray, and the Platinum Jumbo fish, all bred by Thai farmers.

The plant section will also include Lectures and demonstrations from experts, including open question & answer sessions regarding plant cultivation.

It is here during the rainy season when the blossoms of the wild Krachiao flowers (Siam Tulip), cover vast areas of these two national parks in a vibrant purplish pink colour. The festival also includes a selection of nature tours and treks around the national parks along with local performances and music concerts. There will be a vast array of booths selling local indigenous handy crafts and delicious food from the Chaiyaphum province. The best time to visit the fields of flowers is early in the morning when the dew is still on the ground and the early morning rays bounce of the just washed blooms.

See more than 300 species of butterfly, while camping and trekking in the National Park visit the butterfly exhibition and play in the Pang Sida waterfall, it is also here as soon as the ground becomes touched by water butterflies in their hundreds will come to feed on the minerals that are released.

Peranakan Chinese or Straits-born Chinese (also known in Phuket as Baba), are the descendants of Chinese immigrants who came to Thailand in the early 1900’s to escape starvation in their home country. Now in its ninth year the festival is a celebration of exotic wedding rituals of the Thai-Baba Peranakan people and in which, couples from around the world are invited to experience first-hand this unique wedding ceremony.

Couples in the Baba Wedding take center stage, appearing in traditional 19th century Chinese dress and costume. The highlight of the ceremony will be the colourful street celebrations, (where every-one is invited), along the historical Thalang Road. Those couples who have chosen to get married are carried in open carriages or they can walk, surrounded by colourful parasols and become part of the festival through the heart of old Phuket town. Which in turn will be decorated with a mass of red lanterns, to which are numerous festivities including a lion dance and lively parade that makes its way to the Phuket Thai Hua Museum, where they will join the traditional Chinese ceremony and sign their marriage certificates.

While this is a festival open to all it is asked people refrain from wearing black as it will make you unpopular as many Thai and Chinese people wear black only when attending a funeral.

The annual Phuket Baba Wedding event is organized by the Tourism Authority of Thailand, Thai-Peranakan Association and Phuket Municipalities in cooperation with the Thailand’s Ministry of Culture to preserve the Baba-Peranakan culture and to support Thailand as an international destination for wedding and honeymoons.

When: Mid-April until early June

Where: The old city hall Nonthaburi (Just 20 kilometers. from Bangkok)

This annual fair is held mid-April to early-June in front of old city hall to celebrate the abundance of local fruit as well as flowers and plants of Nonthaburi. The event also includes colourful parades of decorated floats, exhibitions, local performances, and beauty pageants where those put off by the heady scent of durian will find “Miss Durian” less pungent and much more appealing. Nonthaburi is home to the world’s most expensive Durian and can cost as much as 20,000 baht, or about $600, see more on the King of fruits

The annual festival is held to highlight variety of fruits of Trat, including salak, durian, longkong, pineapple, mangosteen and rambutan.

Each year on the 26th June, Rayong honours its most famous and arguably Thailand’s most loved and read poet with a special ceremony. The festivities include writing competitions, listening to his poems, an exhibition and other interesting events promoting the literary arts of Thailand.

Sunthorn Phu is listed as a person of international literary distinction by UNESCO.

The picture right shows characters from his famous Phra Aphai Mani poemsand can be found on Ko Samed.

When: From June to end of September

Witness a vast variety and beautiful lanterns based on all manner of themes from animals to fairy tales to the signs of the zodiac. Other activities include a beauty contest and fireworks show. In the Hat Yai Ice Dome, set at a cool -15C, visitors will see different forms of ice sculptures in the shape of palaces, landmarks in Asia, dinosaurs, dragons, swans and more….

White-water Rafting at Kaeng Hin Phoeng Festival is an annual event and during the rainy season, the water level is practically high, providing a faster flow, cleaner rapids, and generally less hazardous conditions. Through-out  the event, there are a number of rafting competition.

The former Thai capital city of Sukhothai will once again present a series of the mini-light and sound presentation with one show per month scheduled between April and September 2017. The show consists of classical performances and fireworks display.

The show takes place at Wat Sa Si inside Sukhothai Historical Park and starts at 19:30 Hrs. on Friday 7 April, 5 May, 2 June, 7 July, 7 September and 1 September. There will also be a special performance on 12 August which marks Thailand’s national Mother’s Day.  Best of all its FREE.

TAT Sukhothai Office is also encouraging tourists to visit Rim Yom market, in the Kong Krailat district of the province, which is open on every first Friday and Saturday of the month. Here visitors can sample a wide variety of local dishes and enjoy shopping for some of the local products of Sukhothai.

Sukhothai, which literally means “dawn of happiness”, is located 439.7 km north of Bangkok or about four-five hours by car or 1 hour 15 minutes by air.

The Koh Tao Festival is an annual event to conserve the islands environment, it aims to promote recycling on both the land and the surrounding seas, along with releasing sea turtle and giant clams back to the oceans. There are many other different activities, including numerous music shows and dancers.

Run the sea to the island

Join thousands of other people in this annual fun run through the Sea to Pithak Island Langsuan. 14 km mini marathon and 3.5 km run fun run. Stage Awards handed out to those who take the challenge.

Chumphon (ชุมพร) is a city at the Central Gulf Coast or Royal Coast of Southern Thailand. It is the provincial capital of Chumphon Province. With numerous direct flights daily from Bangkok to the reopened Chumphon Airport in Pathio – Pathiu District. It’s now the tourist gateway to the Chumphon Archipelago, including the islands of the Gulf of Thailand, Koh Tao, Koh Phangan and Koh Samui.

For more information: The administrative office of Lang Suan Tel: 0 7754 4530

Pineapple Mrs. Lulu and Lychee and the good of Chiang Rai province Festival