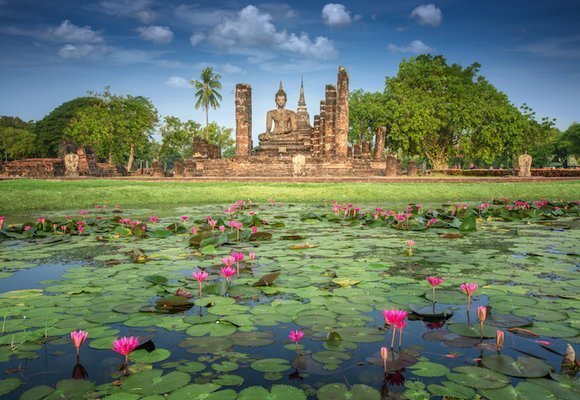 Thailand Festivals Sukhothai. In the early evening, among the ruins of this once great city, the ancient temples once more come alive to celebrate Loy Krathong. It is here as the buildings are lightly bathed by an array of colourful lights that they once more take on a new reverence and majesty, which is lovingly complimented by the candle lit Krathong’s, as they are released to the surrounding water and the Sky Lanterns that are sent high into the ink black night sky.

When: 09 -14th November 2016 In the wake of His Majesty King Bhumibol Adulyadej’s passing this event has scaled back and there will be no fireworks or music

Where: The Ancient City of Sukhothai. Sukhothai Province

While this festival has some resemblance to the Yi Peng Festival of its once neighbours the Lana empire (Northern Thailand) it is in more keeping with the truly annual Thai festival of both water and sky that is Loy Krathong. This colourful Festival is held all over the country, as well as parts of Myanmar (Shan State) where it is known as Tazaungdaing  and in Laos, where it is known as Lai Heua Fai.

Loy Krathong is often claimed to have begun in the Kingdom of Sukhothai  by a court maiden named Nopphamat. However, it is now known that the Nopphamat tale, comes from a poem written in the early Bangkok period. According to H.M. King Rama IV, writing in 1863, it was a Brahmanical  festival that was later adapted by Thai Buddhists to honour Buddha.  It is commonly believed the festival may originate from an ancient ritual paying respect to the water spirits.

The meaning of Loy Krathong

According to the Royal Institute Dictionary 1999, loi (ลอย) means ‘to float’, while Krathong (กระทง) has various meanings, one of which is “a basket to be floated on water in the Loi Krathong festival”. Several translations of Krathong are found, such as floating crown, floating boat, floating decoration.

The traditional Krathong is made from a slice of the trunk of a banana tree or a spider lily plant and is decorated with elaborately-folded banana leaves, to which is added incense sticks, flowers and a lit candle. A small coin is sometimes added as an offering to the river spirits.

The candle on the Krathong is to venerate the Buddha with light, while its ability to float symbolizes letting go of all one’s hatred, anger and Kleshas.  People sometime cut their fingernails or hair and place the clippings on the Krathong as a symbol of letting go of negative thoughts. However, many Thais use the Krathong to thank the Goddess of Water, Phra Mae Khongkha (Thai: พระแม่คงคา). (Mother of Waters) and the water spirits.

Khom loy lanterns are a relatively new addition to the Loy Krathong celebrations and are some-what borrowed from the Yi Peng Festival.

The primary reason to light a lantern in Buddhism, is to offer respects to Buddha and secondly it is believed that the lanterns, just like the Krathong will carry away troubles and bad luck, especially if it disappears from view before the fire flickers out.

The lanterns are usually made of Sa paper  or tissue paper with a bamboo/wire support which holds the flame. A paraffin soaked cloth or a small fuel-soaked disk is used  for the flame which then creates sufficient hot air to inflate the lantern and provide the uplift for the ‘Khom Loy’ to be carried into the nights sky.

Day One: Dawn of Happiness Greeting

Starting at dawn at Wat Traphang Ngoen (Thai: วัดตระพังเงิน) meaning silver lake monastery and continuing for several hours is the merit making, Buddhist event of giving of alms to the monks. Visitors are welcome to attend and should they so wish they can bring their own offering of dry food

Day Three: A day of Exhibitions and displays

This is the day when the festivities are cranked up a notch or two and the historical park is filled with day time exhibitions of Thai boxing, traditional dance performances, plays and a bucket full of food and handy craft stalls.

Also available will be bazar featuring traditional Thai items, Traditional Thai Puppet shows, displays on how to make your own Krathong, how to carve fruit sculptures and the chance to tour a replica village from Sukhothai’s long and at time bloody past.

The festivities return to the early evening as the sunsets on day four and the air is alive once more with traditional dancers and musicians. Held this time at Wat Mahathat, known as the most important and impressive temple in the Historical Park. The temple’s name translates to Temple of the Great Relic. The dance performances tell the story of the city’s history, while both the temple and the multitude of surrounding buildings are bathed in subtle lighting which brings its own mood to the event and which is brought to a climax by a late night fireworks display

This is the main day of the festival and is usually attended by a member of the royal family, so you can expect a higher level of security, the good news is you get to witness the pomp and ceremony you get from a royal affair.

The day time is again full of exhibitions and displays and come the early evening as the sunsets once more, the floating of the Krathong’s take place, with a backdrop of light shows, barge processions and the releasing of sky lanterns, this mass of colour is truly a wonderful serine occasion, with the festival finally coming to an end with a huge fireworks display.

A brief History of the Kingdom and city of Sukhothai

The Kingdom of Sukhothai was an early kingdom in the region (see map below) governed from its capital city of Sukhothai. The Kingdom existed from 1238 until 1351. The old capital, is 12 km outside of new Sukhotai in Tambon Mueang Kao. These ancient ruins have been designated as a UNESCO World Heritage  site and is just one of the Five World Heritage sites, found within the Kingdom.

The Town of Sukhothai was the capital of the first Kingdom of Siam. The city blossomed in the 13th and 14th centuries and illustrates the beginnings of Thai architecture.  It was built by the Khmers and taken over by the Thais in 1230. The Thai language and alphabet originated here, the last was invented in 1283 by the famous King Ramkhamhaeng as a revision of various forms of Khmer alphabets into a system suitable for the writing of Thai words. Sukhothai can be translated as Dawn of Happiness.

Within the walls of the old city of Sukhothai are the ruins of twenty Wats (temples) and monuments, the greatest of which is Wat Mahathat. The spiritual aspect of the buildings are emphasized by the pools of water with their beautiful lotus plants that are everywhere within the city. It was and is still sometimes known as the Venice of the East, a crown that Bangkok was later to wear.

Visitors do not require special tickets for the first 3 days of the festival just the normal entrance fee to the ancient city.

Tickets for the final 2 days and nights are priced at 500 baht per person per day, they are available at the ticket booth near the Parks main entrance or via the Sukhothai Tourist Office Tel: 055616228/9