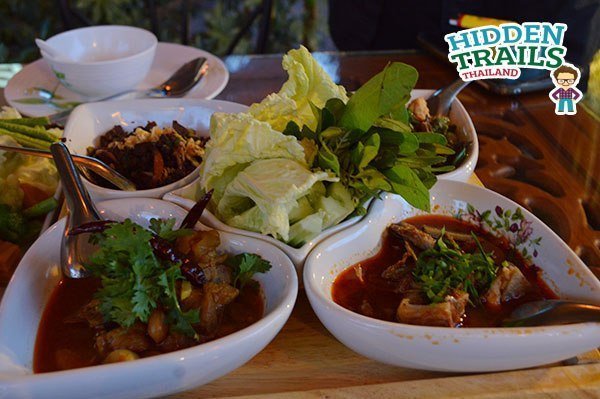 Thailand Chiang Rai Lanna. Chiang Rai being the Northern most city of Thailand was one of our destinations for exploration in Thailand. Having heard much about this province, we decided to make a 3 days 2 night stay in Chiang Rai and explore this region.

Chiang Rai was  part of the former Mangrai dynasty and was made a capital city by King Mangrai in the year 1262 CE. Today it us known as the Lanna provinces which include Chiang Mai down south. The Lanna provinces are well known for their food which is an influence of Burmese and Thai.

On our recent trip to Chiang Rai, we were on the lookout  for authentic Northern Thai food. Not knowing Chiang Rai that well and more or less driving aimlessly up to Mae Sai  from Chiang Rai city. Along the highway there are several shops selling mostly noodles and we wanted something different. We spotted a sign with some food pictures and had to make a U-turn. Thinking it was a small shop selling simple stir-fried dishes, it was amazing when we were taken in through a small lane to the restaurant proper.

The restaurant was known as the Krua Sukhotai Restaurant and it can be easily missed along the highway. This restaurant serves traditional Northern  Thai cuisine, Chinese  and Western. We were keen on authentic Lanna styled food.

The restaurant affords a beautiful view of the mountains, a well landscaped garden and lush valleys below. The restaurant itself was constructed in typical Lanna  style of wood and pointy roofs. The refreshing perspective of Krua Sukhotai Restaurant was how well it blended with the surrounding countryside. With several dining areas, we had a choice of  indoor or outdoor dining. We opted for the indoor open dining as it was the rainy season and night was approaching. The restaurant opens for lunch and dinner which we later found out.

As with most restaurants in this province of Chiang Rai, matured greenery all around is a staple part of the design, along with wooden floors, furniture and an environmental friendly concept is embraced throughout.

Chiang Rai is a great province for a variety of tourism concepts ranging from eco-tourism to adventure tourism. The richness of natural environments, colourful artistry and unusual blend of neighbouring countries makes Chiang Rai a perfect getaway in Thailand for a relaxing holiday. Much of the unique and exotic blends are also reflected in their style of restaurants and food which makes it a gourmand’s paradise for food lovers. We have noticed that many of the restaurants in Chiang Rai now serve organically grown foods and produce which makes it just perfect for those who appreciate good quality food at reasonable prices.

As you fly into Chiang Rai approaching the airport, you will have a great view of the magnificent mountain ranges that border this northern province to its other neighbours of Myanmar and Laos. This same view is even more impressive on the ground as you note that Chiang Rai is like a locked-in province protected by these same mountains and the city is formed in the cusp of the valleys that cradle it. With these neighbours, Chiang Rai was home to migrating peoples from tribes even as faraway as China and Northern Indiawhich made it a wonderful gateway for diversified cultures. This was reflected in their traditions, food, architecture and religion.

Our intentions at this restaurant was to try authentic Lanna cuisinewhich means that much as we were tempted to try the other great varieties on the menu we would stick by our decision. One thing is when you are famished it is very tempting to order more than you can possibly finish! We looked through the menu a few times as there was a big choice to choose from and decided that we should order the basic fare of Lanna cuisine which most would deem as “must- haves” on their dining table. We started with the traditionalKhantoke dish. This is a typical Northern Thai appetiser that in some places they serve on a wooden tray called the “Khantoke”. This one was better presented but the dishes were very traditional and the flavours wonderful. The blend of herbs and spices was just right. The Khantoke consisted of Larb Moo where the spices had blended nicely into the meat (which meant that seasoning and cooking was on a slow heat to allow flavours to be fully absorbed, unlike the quick cook variety where only a hint of the flavour was in the meat), the green chilli paste made of pounded green egg plants and green chillies with a hint of shrimp paste, a dry pork curry, side dishes of raw vegetables, deep fried onions, northern style Isaan sausages, pork rind crisps and deep fried onions. A wonderful dish that could actually feed 4 persons and one of your must-try dishes at this restaurant.

We also had the free range chicken in a spicy soup called “Toom Som Khai Baan”. This soup had a mix of lime leaves with crushed lemon grass, fresh chillies, galagal ginger, lime and some other herbs and spices. It is similar to tom yum gong but yet slightly different in flavours with additional ingredients. It comes served in a hotpot and the soup is a little spicy but yet very invigorating and goes well with steamed white rice.

The third dish was a Northern Chilli Paste dish with minced pork cooked in tomato chilli paste and sides of raw vegetables. Northern cooking comes with plenty of fresh raw vegetables such as Thai basil leaves which differ in taste from Western basil, round cabbage leaves and Chinese cabbage leaves, cucumber strips, round baby egg plants, a variety of ginger strips and other local herbs. All these when eaten together with the cooked dishes provides a very unique blend to the taste buds. Price for eating out at such a place is a mere Thb 700 which is very reasonable considering the quantity and variety!

The Krua Sukhotai Restaurant also has a Thai Silk shop which sellshandmade silk items ranging from scarves to dresses and other household items as well as ladies and men accessories. Thai silk is one of the staple hand products here in the Northern provinces.

If you intend to visit Chiang Rai, read more about what you can see and do in a 3 days 2 nights in Chiang Rai travel itinerary that gives you ample time to explore points of interest in a limited time frame. My modus operandi while travelling is to explore in-depth about a place to fully appreciate and discover the unique properties of the destination. To travel. explore and experience is one way to enrich our lives and Thailand offers many such places that not only is unique but also exciting and exotic with very diverse sights, foods, festivals and travel experiences.