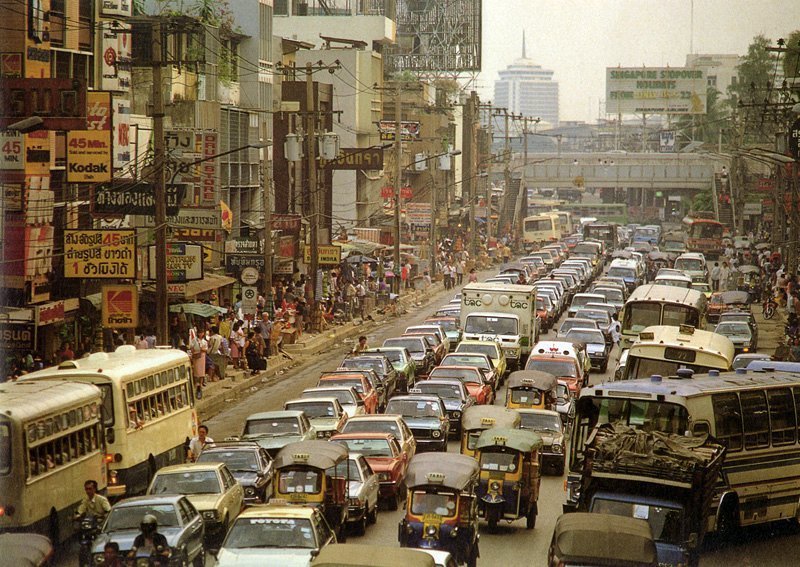 I lost my heart to the Big Mango Bangkok

Discover Thailand with Thailand Discovery. Bangkok is also know as the Big Mango.

Back in the 1980’s I lived in UK and worked for a Swiss based multi-national company with offices & factories in Hong Kong & Pakistan.  I was enormously lucky as this gave me an envious chance to see much of Asia at the expense of my employers.  I was mostly allowed to bring my husband John & young son Adam to accompany me on business trips and boy did we take advantage of this perk.  Whenever we visited Hong Kong we would take the time out for a stopover somewhere in S.E. Asia and we managed to visit & explore many of the more popular countries.  Pakistan was a slightly different ball game as we weren’t quite confident enough to drag an 8 year old with us to Karachi.  However John & I were privileged to be invited to a very prestigious family wedding which took place over a period of almost two weeks. Even back then we were advised not to stray too far from the Holiday Inn where we stayed but we were hellbent on exploring Karachi City, wandering through quiet back streets where we were fortunately met with nothing but friendly hospitality.  Of course we wouldn’t take such risks in today’s much changed World.  I have no doubt that if we’d taken similar risks the last couple of years then we’ve have shown up next in a horror propaganda video wearing orange jumpsuits!!

The strange thing is that during that period we never stopped over in Thailand as we always promised ourselves that we would ‘do’ Thailand properly as a family holiday with Adam.  That opportunity finally presented itself in 1989/1990 when we set about planning our 3 week trip to Thailand which spanned the Christmas & New Year holidays.  Like many first time tourists we decided on Bangkok, Chang Mai & Phuket.

We arrived into Bangkok early in the morning and before we had even left the old Don Mueang airport we had fallen for several of the now well-known tourist scams.  By mid-afternoon we were being driven around in a minibus visiting the Golden Buddha, Wat Po and the inevitable jewellers, tailors & silk shop!  Needless to say I was in possession of a beautiful (and thankfully genuine) ruby & diamond ring before my head hit the pillow on that first night in Bangkok.  It didn’t matter……. We had instantly fallen in love with The Big Mango!

Looking back it’s hard to believe the naivity of a first time tourist in Bangkok but that’s exactly what we were.  We believed that MBK was closed on Mondays and jumped willingly into the first tuk-tuk who knew somewhere that was ‘fortunately’ open.  We were talked into buying crabs, lobster & Garouper fish at the night seafood buffet and we didn’t even flinch when presented with a bill for 5000 baht for our meal.  The biggest problem we had there was that we were not carrying 5000 baht or credit cards so the restaurant manager bundled himself into the tuk-tuk with us and accompanied us back to the hotel so that we could get the balance of our bill from the room safe.  Still, the journey back to the hotel was incredibly funny with the manager sitting on the floor of the tuk-tuk and holding on for dear life.  I wonder how many times he did that same journey in his career??   We travelled up and down the Chao Phraya in a long boat and were dutifully dropped of at Wat Arun, the crappy zoo & were then obligated to feed the temple fish and buy refreshments and a silly croaking wooden frog from the mini floating market.  I think we must have been a scammers dream client but we still had a seriously wonderful & heady 3 days.

Like most first timers, we didn’t have enough time in Bangkok.  Those 3 days simply disappeared on us.  We’d been the perfect first time tourist but we also discovered the simple pleasures of a spicy & tasty Tom Yung Khung, Pad Thai & Som Tam & our lives were changing without us even realising it.

Chang Mai was completely different and there we discovered more friendly people, a very different cuisine and the best traditional massages in all of Thailand. We rode elephants (sorry we didn’t realise back then that they are not always treated too well in the tourist camps), watched them bathing after a hard day’s work & rafted down a tranquil river. It sounds like bliss but to be very honest we didn’t like it as much as Bangkok, wishing we’d spent more time in the Mango.

On Christmas Eve we flew down to Phuket and took a taxi to Chalong Bay.  I’d found a small hotel called Phuket Fishing Lodge in the AA Guide & had booked by email which was cutting edge technology in those days!  The taxi dropped us at the end of a dirt track telling us that the ‘hotel’ was a short walk down the track.  We arrived 10 minutes later into a ramshackle reception area with not a sign of any staff anywhere.  Finally we found somebody who spoke a little English & we dragged our luggage a bit further up some concrete stairs to find our family room.  To say that it was a bit tatty would be an understatement but by then we were happy to just see beds & a bathroom.  The view from our room over Chalong Bay was spectacular, we went to find a much needed Singha beer & the world started to feel good again.

Well the room & hotel might have been tatty but we had a totally wonderful holiday making very good friends with the owner Siri Chulasawok who extended us the kind of hospitality you can only dream of.  He had his chef cook ‘mash potato & brown gravy’ for our son whilst we enjoyed fresh seafood most days.  Siri loaned us his Japanese Chef to join us on a fishing & Island boat trip and also loaned us a couple of mini Harley Davidson motorbikes on which the 3 of us explored the south of the Island for a week.  In those days the area between Chalong, Rawai & Nai Harn were separated only by sand dunes & we were able to explore easily on our mini bikes.  Siri had been educated at an exclusive school in UK and showed us pictures of himself as a boy with The Queen Mother.  Siri was to become a close friend, one of many very good long term Thai friends as it turned out.

I lost my heart to the Big Mango Bangkok. So as New Year 1990 approached we had to accept that our best ever holiday was drawing to a close.  The sadness we felt then was softened by the secure knowledge that we would be back in Thailand whenever and as often as possible.  That promise we made ourselves back then has been fulfilled many times over.  We’ve been back to Thailand maybe 25 times, although nowadays we are happy to camp up at The Indra Regent Hotel or The Eastin Makkasan for up to 3 months at a time, only leaving Bangkok when our Son Adam (now over 30) & his gorgeous wife Debbie are able to join us for an occasional beach holiday in Jomtien.

John & I now live in Spain and in retirement are not able to travel as extensively. It makes no difference where I am in this glorious World, part of my heart remains forever in Thailand and most particularly in The Big Mango!!

I lost my heart to the Big Mango Bangkok