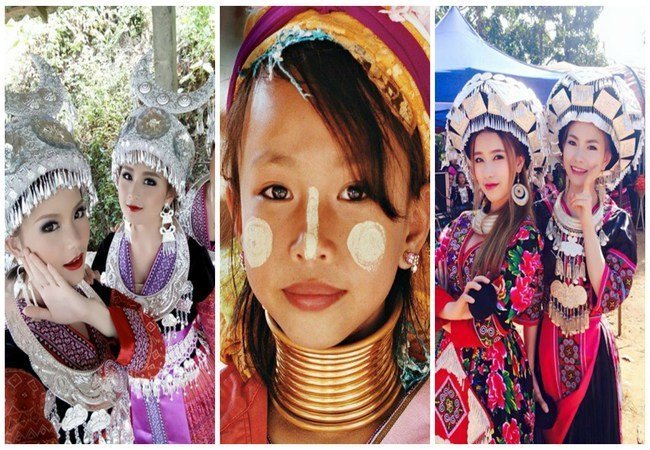 The term ‘Hill Tribe’ (Chao Khao) first appeared in Thai official documentation in the 1960’s, recent history has given a new official term that of the “highland Thais”.

The Seven Major Hill Tribes of Thailand. There are broadly speaking seven major hill tribes within Thailand they are the Akha, Lahu, Karen, Hmong/Miao/Mong, Mian (Mien or Yao),Lisu, and Padaung (While the Padaung are in fact a sub group of the Red Karen and on a simple numerical bases cannot be really termed a “Major Hill Tribe”, I have included them in my list as they are fast becoming the most recognized of all the Hill Tribes).

Each has its own distinct language, customs, culture and spiritual beliefs. Within these seven tribes there are many sub-groups and clans that further divide the tribes. To help each clan, distinguish other clans, many of the sub groups are named after the colour of their traditional dress i.e. the Lahu have 6 sub groups of which 4 are named the Black, White, Yellow and Red. While the Lisu are divided into two sub-groups: the striped Lisu and the black Lisu.

Almost all the present day Hill Tribes inhabit the high mountainous areas of the Northern and Western Provinces of the Kingdom of Thailand.

Most of the Hill tribes listed here have been in Thailand for a relative short time having only migrated into the region during the past 100 years or so, with the most recent the Padaung only arriving in the last few decades. Far older tribes still inhabit the mountains in Northern Thailand, but their numbers are relatively small, for example the Lawa, who are considered to be the first settlers to Thailand, sometime in the 5th century BC number only 17,000 people.

Almost all of the Hill Tribes were once semi-nomadic people using swidden (slash and burn – moving onto new ground on a seven year cycle) farming methods, to produce dry rice and maize. They were also once able to harvest timber, raise live stock and some were elephant masters and specialist hunters. Plus many had brought from their former homes in both China and Burma the art of Poppy farming as a cash crop.  Northern Thailand with its neighboring countries became known as the Infamous ‘Golden Triangle’

It was not until the 1950’s when a dramatic increase in their numbers (many were escaping persecution from bordering countries), extreme poverty, statelessness and the threat of insurgency forced the Thai government with financial foreign aid, to form a National Committee for Hill Tribes, with the expressed aim of eradicating both the financial need to grow Opium and to stamp out the drug barons that enforced their will on the farmers.

Alternative cash crops were successfully substituted, including Tea, coffee, flowers and vegetables. This is known as the Royal Project, initiated by his Highness King Rama IX.  Opium was not wiped out as a wide spread economical crop until as late as the 1990’s. See our post from Opium to Tea.

Later in 1968 the Thai Government insisted that the Hill Tribes must stop their traditional form of subsistence living and in return offered them Thai IDs and land rights. They are now what we may term ‘settled’ but their lifestyle is still influenced by their culture. Not all of the Hill Tribes People are Thai citizens. Some hold “white cards” which allow them to remain in Thailand but give them the status of second-class citizens.

Their efforts to settle into their new homes has meant that it is now not uncommon to see intensive irrigated rice cultivation on permanent terraced fields laboriously constructed on the flanks of mountains.

The beliefs and religion of the majority of the Hill Tribes are based on Animism, domestic Ancestral Worship and shamanism, along with an ever increasing belief in Buddhism and Christianity.

Animists believe the world is inhabited by spirits that are usually (but not always) invisible to humans. These spirits may live in trees, in rivers, in mountains, in normal houses, or houses built specifically for them. Some of these spirits are dangerous, and protective measure must be taken against them. For example, The Karen believe spirits cannot climb an odd number of rungs on a ladder so ladders to Karen houses always have an odd number of rungs.

Veneration of the dead is based on the belief that the deceased, often family members have a continued existence and/or possess the ability to influence the fortune of the living. While this may seem strange for many it is not that uncommon, for example the Catholic Church, venerate saints as intercessors with God.

Is a practice that involves a practitioner reaching altered states of consciousness in order to perceive and interact with a spirit world and channel these transcendental energies into this world. A shaman is a person regarded as having access to, and influence in, the world of benevolent and malevolent spirits, who typically enters into a trance state during a ritual, and practices divination and healing. (Wikipedia)
As with most of the Hill Tribes of Thailand, memory and recitation, (through both stories and songs) has been the sole form for preserving and passing on, tales of their history and culture down through the generations. (The Hmong also hand down tales embodied into their garments). Only the Mian/Yao people have a pre-modern written language which due to their 2,000 year history in southern China is based on the Chinese language.

While most of the hill tribes are still using their own languages many teenagers have started to adopt Thai, not only because of the influence of the Thai educational system but because of tribal discrimination in lowland-Thai society, Others go further and change their names to Thai again in the hope that they will be treated equally with their Thai counterparts.

While most people’s view of the hill tribes is one of a content and an idyllic way of life, one should never forget that they live in an unforgiving mountainous environment, where they are at the mercy of the nature and where the climate can often destroys crops and villages, and where they are often cut off from the outside world and one another during the rainy season. Despite these hardships they have all managed in different degrees to maintain their individual rich cultures and sense of community.