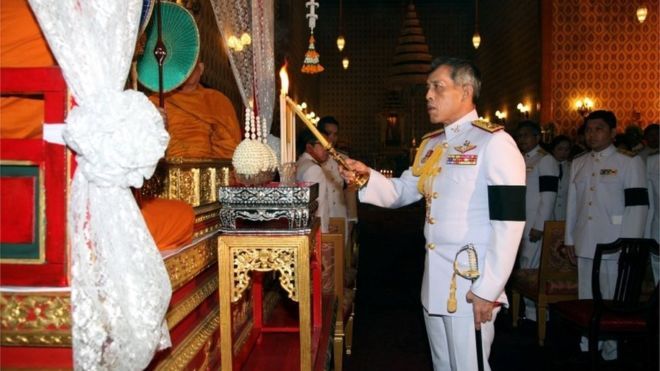 The King of Thailand Rama X

BANGKOK — The King of Thailand Rama X. Thailand has a new king, with the country’s crown prince formally taking the throne to succeed his much-revered late father who reigned for 70 years.

The new monarch, who received the title “His Majesty King Maha Vajiralongkorn Bodindradebayavarangkun,” assumed his new position Thursday, according to an announcement broadcast on all TV channels. He will also be known as Rama X, the tenth king in the Chakri dynasty that was founded in 1782.

A videotaped broadcast showed senior officials presenting the formal invitation to the prince to become king, and then his acceptance. It then showed the officials prostrate themselves at the feet of the new king, who was wearing a formal white uniform with decorations.

Vajiralongkorn’s father, Bhumibol Adulyadej, died on Oct. 13 at age 88 after many years of ill health. In 1972, Bhumibol designated Vajiralongkorn — his second child and only son — as his successor.

“I would like to accept in order to fulfill his majesty’s wishes and for the benefit of all Thais,” Vajiralongkorn said in the videotape.

The King of Thailand Rama X

The full name of the new king in Pali means “Vajiralongkorn Descended by Flesh and Blood of God Indra, Overlord of all Angels” – but Thais will mostly refer to him as Rama X.

The new king led the Buddhist rites marking the 50th day since his father’s death on Thursday at the Grand Palace which will continue through Friday.

He will be coronated after the cremation of King Bhumibol as soon as late next year.