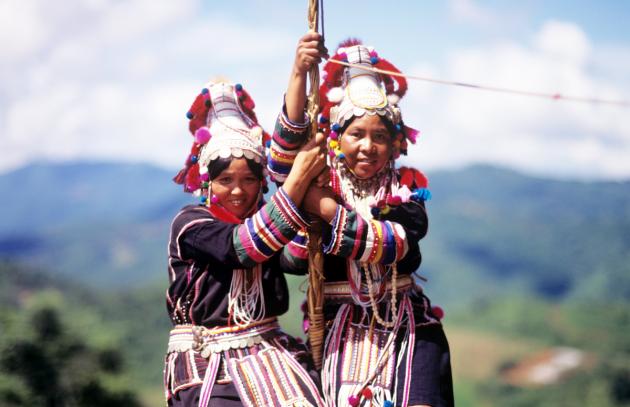 The 80,000 or so Akha people who now reside in the mountains of northern Thailand and are now known colloquially as one of Thailand’s ‘Hill Tribes’ once had their own Kingdom in what is now China, but over centuries of persecution, slavery and prejudice (the latter is still evident today) they find themselves still fighting to keep their own unique identity.

Swinging for fun and the dead

The Akha Swing Festival Thailand. Perhaps the most important annual festival for the Akha people is commonly known as the Swing Festival. The four-day festival comes in late-August  and is known by the hill tribe people as, Yehkuja, (or Loa Cher Bee Err) which loosely translates as “eating bitter rice”, a phrase which is believed to be a references the previous year’s dwindling rice supply and incorporates the hope that the expected rains will soon water the newly planted rice crop.

When: End of August until the beginning of September
Where: The mountains of Chaing Rai Northern Thailand

The Akha Swing Festival Thailand. Festival activities include ritual offerings to the family ancestral spirits at the ancestral altar in a corner of the women’s side of the house. (Akha life is segregated by gender both in the home and in common areas). The swing festival is particularly important for Akha women, who eagerly wait the opportunity to wear the clothing and the ornaments they have spent all year making and to show, that they are becoming older and of marriageable age.

Because of the fact that the village women spend so much time making their traditional clothing and jewelry to wear at the event, which they display with such pride while performing traditional dances (You Tube link) and songs for the other villagers, the Swing Festival is also known as ‘Women’s New Year’, the traditional New Year which falls in late-December is known as Men’s New Year.

While the village women are invited singly or in pairs to swing as high as they can to bring good luck and bountiful harvest to the village, the event does not exclude men from joining in what looks at times a suicide pact.

The Akha Swing Festival Thailand. A new swing is built for the festival each and every year, under the guidance of the village leader called a Dzoeuh Mah; villages without this most revered spiritual leader cannot build a swing.

Firstly last year’s swing must be removed, four long poles are cut from the surrounding jungle and two new post holes are dug. The new swing must use two of the holes from the previous year’s swing. It is a time of shadows and where everyone has to be alert; the swing must be in a spot where no house shadow falls across it and the diggers cannot let their shadows fall across the postholes.

The poles once imbedded into the earth inside the village form a quadrangular about four metres apart. At this stage of the build, a ceremony is held, during which the spirits that owned the soil are asked for permission to use it. Whisky, tea, fermented rice, and coins are offered, to appease the ground spirits and insure against any untoward mishaps.

The Akha believe that their spirits can influence both, the daily life and longer-term fortunes of the living and it is believed that the Swing Festival, in part is also a ritual in which thanks are given to the spirits of dead ancestors and asking them for help in the future harvest.

Once this important rite is finished men climb to the top of the poles, which are then firmly tied together with rope, creating what looks like the skeleton of a huge wigwam. There after a heavy wooden yoke is added to the top of this large edifice, to which is added a length of strong, course woven vine, which acts as the pendulum.

Each of the four days of this annual event has its own meaning so states The Ban Jalae Hill Tribe Life and Culture Center; located in the capital district of Chiang Rai province, twenty-two kilometers from the city of Chiang Rai.

Known as the Jar Bear ceremony, Akha women wear their traditional dresses along with a huge array of ornaments and will do so until the end of the festival. They collect water from a holy well for the rite of “E Joo E Saw” which is a ritual for their dead ancestors of each family, when Sticky rice buns with black sesame, steamed chicken, rice wine and hot tea are offered at the ancestral altar.

For every major festival sticky rice grown in a special field, is steamed and then pounded in a wooden pestle, called “Hor Tong” until worked into a sticky mass. Small black sesame seeds called “luuh seeh” are added along with some salt and the paste is shaped into cakes which are given to guests.

Known as Jew Ma’s, the day starts with all the village members meeting the Dzoeuh Mah, asking his guidance on what will take place over the day and who will be allocated the task of building the ‘Swing’ . No other rites are held this day, excluding asking the spirits of the land for their permission to erect the swing and no animals will be killed. Once the swing is complete the Dzoeuh Mah will be the first to try it and to give his approval, there after all are welcome to play on the swing. The day comes to an end when families have finished building their own far smaller swings for their children (Err Ler), made from bamboo.

Known as “Wan Lor Da Ar Pew, this is the major day of the event and where all the families join in preparing food for the main party. The village elders conduct their own rite and bless the people, along with their invited guests, with the hope that they have good fortune and happiness in the year to come.

The whole day and night is a riotous combination of food, drink, singing and dancing, as the air is filled with the laughter and whooping as people try to outdo each other on the swing.

Known as “Jar Sar”, is the last day for every-one to play on the swing as come 6pm, the Dzoeuh Mah in his ceremonial robes will remove the rope binding the swing and while the posts will remain this is the last time it will be used. After the evening meal has finished and the sacrificed items are removed, this year’s festival is drawn to a close.

If you are going to attend this festival it is best to note that this is the rainy season in the North of the Kingdom and if it doesn’t rain during the festival, it is regarded as a bad omen.

There are actually 3 different kinds of swings found in all Akha villages:

A Time to Reflect

There is a song of the Akha people which goes something like, “you still can feel free while swinging in the air”, this single verse possibly sums up the plight of these at times, still ridiculed people. This annual festival held in their remote villages in the mountains of the North surrounded by their green and blue mountains, brings into focus that when during the four days they swing to and fro, this action is possibly a simple reflection of their long and at time tragic history.

For more on the seven Hill Tribes of Thailand click here