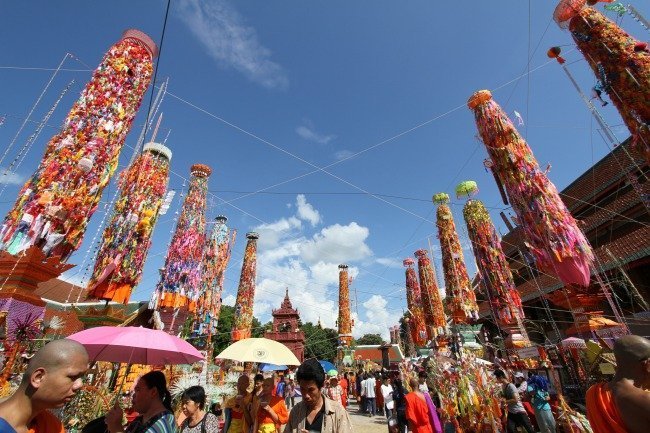 Thailand Festivals Salak Yom festival is a unique annual event among the ethnic Yong of Lamphun Province and is a local variation of a northern Thai Buddhist ritual held in the tenth month of the lunar calendar (September to October) known as Kuay Salak or Salakapat.

From the book Enlightened Ways: The Many Streams of Buddhist Art in Thailand

This festival as with so many others in the Kingdom at this time of the year (the tenth lunar month or twelfth month of the Northern calendar), is when the spirits of the dead are believed to return to earth in order to receive the merit and offerings given by their descendants. (See below for Similarity with other festivals in Thailand)

The Salak Yom ceremony features the presentation of elaborately decorated “trees of gifts” to the Buddhist monks and novices of the local temples, in return for merit and blessings for the donors. The centerpiece of the ritual is a tall bamboo pole, sometimes as high as ten metres, decorated with thousands of brightly coloured, tufted rods called may haew – also made out of bamboo.

The gifts hung on the upper part of the tree comprise offerings for the monks, such as alms bowls, robes, blankets, palm leaf manuscript holders, dried foodstuffs, and money. The lower half of the tree is decorated with offerings intended for the spirits of the deceased, such as clothing, cigarettes, and accessories; chosen according to the preferences of departed family members.

A wooden platform at the base supports the towering structure. Covered with hand-cut, patterned tissue paper, the base is ornately decorated with additional offerings, including fresh fruits and vegetables, fishnets, and baskets. More contemporary elaborations of the Salak Yom base include intricate installations of sculpture and handicrafts, including sculptures of Buddhist symbols like the mythical serpent Naga.

At the top of the tree is an umbrella called a jong, to which is added banknotes and decorated coins called khaja. Many of the large Salak Yom trees feature framed photographs of the deceased to whom the offerings are dedicated

On the first day of the event the Salak Yom Trees and smaller offerings known as simply Salak, are taken to Wat Prathat Haripunchai in a parade. The next day the Salak Yoms are donated to monks (among the sub districts’ seven monasteries) by way of a lottery, those monks that are awarded the Salak Yom trees and donations in smaller salak’s (see below) will on this last day look for the families who made and offered the Salak’s so they can bless them. The festivities include numerous activities and Lanna musical and dance performances, plus a Salak Yom tree contest. The event is now a clamorous and colourful array of Buddhism, spiritualism and funism.

Offerings are not just in the form of a Salak Yom tree, people make Salak offerings (donations) in many different ways; the smallest offerings are called the Salak Noi, and are placed in a basket made of woven pandanus and banana leaf. One variety is known as kuay tin chang, or “elephant foot basket”, named for the basket’s resemblance to the foot of an elephant, these are placed alongside the Salak Yom trees at Wat Phra That Hariphunchai temple

A little on the Yong People

Joachim Schlesinger, in his excellent book Tai Groups of Thailand, states that the Yong ‘are in fact ethnic Lue people who once lived in Muang Yong of today’s Shan State of Burma. As is common practice among Tai peoples, the Tai Yong derived their new group name from their location at Muang Yong…. The King of Siam ordered the Chiang Mai rulers to launch several military raids north and west into the [Shan, Khun and Yong] villages and towns to capture the inhabitants and resettle them as war captives to Chiang Mai, Lamphun and Lampang. The largest influx of Yong occurred in 1805, when 10,000 people were taken from Muang Yong to be resettled in northern Thailand.’ He goes on to state that the first Yong arrivals in Thailand settled in the Pasang District of Lamphun Province.

While little is known about the history of the Salak Yom festival, in the ethnic Yong original homelands in Burma (now Myanmar), the Yong of Lamphun attribute the practice to their homeland and regard the ritual as an essential marker of their ethnic identity

This ancient event was in the past all about the young women around the age of twenty, who would offer a Salak tree to their local monastery. For these young women, the Salak Yom ceremony was not only a one off passage into adulthood, it was also the opportunity to express a woman’s social status and that she had reached a marriageable age. The trees would contain house utensils, money and valuables plus cloth, food, fruit, vegetables and the eight necessities of a Buddhist monk. The tree would also contain a Kalong.

ALEXANDRA DENES writes in his ‘Trees of Offerings’ The kalong is a lengthy poem written in the Lan Na script that describes all aspects of the Salak Yom tree, the donor, and her family. Several months before the ritual, the parents of the young woman would seek out and commission a skilled and learned writer to compose the poem – usually a former monk called a pho nhan. This composer had the task of writing a poem about the young woman’s upbringing and her family, including details about her parents and siblings, her birth, education, important events, hobbies, and special skills.

In addition, the kalong described the Salak Yom tree itself, including the offerings of money and valuables, and the support provided by friends and family in constructing the tree. In addition, the kalong also included Buddhist teachings as well as other stories. Gifted composers always included jokes or humorous vignettes to lighten the mood. The kalong was sung several times. It was sung first during the lengthy preparation of the Salak Yom to create a fun and festive atmosphere.

Groups of three to four young men would visit the home of the donor to practice singing the kalong in harmony while family and friends prepared the offerings. The kalong was also sung on the day of the Salak Yom rite

Renewal of this ancient festival

Due to the high costs in conducting the ritual, the changes in Thai culture in the 30’s and early 1940, towards Nationalist policies, combined with the economic change in the countryside, were fewer people worked on the land and stayed within a family unit, this ritual began to fade, so much so that the Salak Yom festival went into decline from the 1950s, and nearly disappeared. While there is the beginning of a revival of the festival, the symbolism of the Tree has changed and the event is now entered into by every-one.

Similarity with other festivals in Thailand

This event has a number of similarities to other festivals held across the Kingdom around the same time, they are The Festival of the Tenth Lunar Month, which is mainly a southern festival, the biggest held in Nakhon Si Thammarat, Southern Thailand.

The Por Tor Festival or ‘Hungry Ghost Festival’, which has its roots in Chinese folk lore and is held annually across Thailand, the Tiggkrahad ritual is also similar to the purely Thai event; Festival of Offerings to the Dead (Sart Day วันสาทรไทย), which is held all over the Kingdom.

There are also a number of uniquely ethnic festivals that also contain the same principles of praying to dead relatives they include the Mon people who celebrate, The Mon Floating Boat Festival and their neighbours in Kanchanaburi, the Karen people who have their festival of Khao Ho or Ang Mi Thong. There is also the Khmer event of San Don Ta known as ‘Ancestors’ Day (Pchum Ben)’ or the Khmer Festival of the Dead