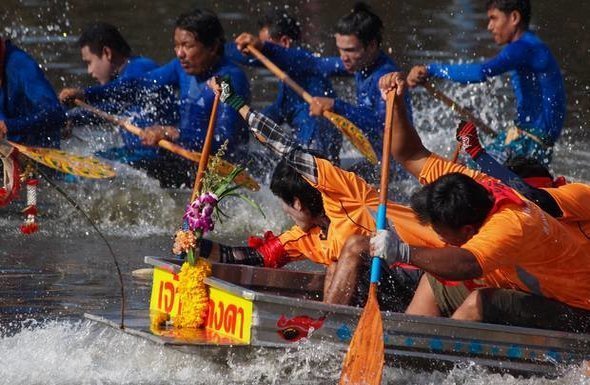 There are a good number of Long boat races and Festivals across Thailand with the majority staged during the Thai Buddhist Lent Period and around Wan Ok Phansa Day, normally September and October each year, (16th October 2106), it is also the time of the year when the rivers are also at their highest.

Long Boat-Racing is one of Thailand’s oldest traditions and the events have been arranged continuously since the Ayutthaya time (approx. 600 years ago) When they were used to enhance the physical and mental strength of the men folk, as the country was almost Continuously at war with its neighbouring countries of Burma Lao and Cambodia.

What today’s festivals all have in common is a great atmosphere punctured by the tumultuous noise and vibrant colours that take hold of your senses and leaves you wanting more. Combine this with the assault on your taste buds and nostrils from the vast army of people selling local produce including delicious food and drink and you can tell why the Thai people enjoy these festivities so much.

Enjoy this traditional long boat-racing for the King’s and Princess’ cups. The goal of the boat race is to conserve the provinces long boat-racing tradition, as well as to promote tourism in Chainat. The province while not on most tourists radar in well known in the Kingdom for its handicrafts, including basketry, sculpture, weaving, as well as ceramics and for its sweet tasting ‘Khao Taeng Kwa’ Pomelo. The fruit tastes like a sweet, mild grapefruit, though the typical pomelo is much larger than the grapefruit. It has none, or very little, of the common grapefruit’s bitterness. It is usually pale green to yellow when ripe, with sweet white (or, more rarely, pink or red) flesh and very thick rind pith.

The event is also known as Pa Sak Boat Racing Festival and you chance to witness a multitude of long boats taking part over the two day festival. There are 3 categories from the formidable 55 crew craft, to the smaller but equally impressive 30 oarsmen down to the nippy 12 crew mini boats.

The winning teams will receive HRH Princess Maha Chakri Sirindhorn Trophies. There are 3 categories from the large 55 crew craft, to the smaller but equally impressive 30 oarsmen down to the nippy 12 crew mini boats. There will be a variety of other contests and performances featuring the unique heritage of the local people.

Experience the traditional end of the Thai Buddhist Lent Period; Tee Chang Nam Nong ceremony and the worshiping of the Goddess of the Mekong River.  Immerse yourself by watching local performances by the 8 Thai, Laos and Vietnamese tribes of the Mukdahan Province, plus witness a breath-taking amount of Long Boat races between the people of both Thailand and Lao. 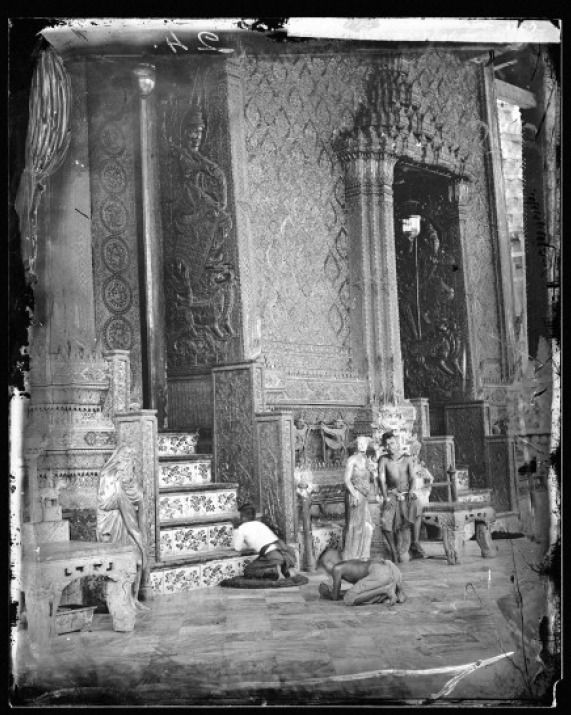 The Chumphon traditional boat race is an annual event held at the end of the Buddhist Lent (23rd October 2016) and is unlike most other of the events in the Kingdom. While the winners of other traditional Thai long-boat races are decided by the teams that cross the finishing line first, here the contestants  face an additional challenge, to be declared the winner of the Chumphon boat race, a member of the crew also has to climb up the bow and grasp their own marker flag.

Activities include the presentation of merit-making offerings, contests that draw attention to the various aspects of the hand-crafted traditional long-boats and cheerleading contests.

The province of Nakhon Sawan is 2 h 59 min (244.0 km) north of Bangkok, the name of the province literally means city heaven or heavenly city and has been around for roughly 14 centuries. While this particular event has not been in existence for this whole time, long boat racing has an ancient history with the province. This particular event is also known as ‘Boat Races for His Majesty’s Trophy’ (ประเพณีการแข่งเรือยาวชิงถ้วยพระราชทาน), which are held annually at the end of the Buddhist Lent (23rd October 2016) on the Chao Phraya River in front of the Provincial Hall. There are also races at temples along the river such as Wat Ko Hong and Wat Takhian Luan.

During the festival, there are also the boat procession, Miss beautiful lady contest, cultural performances and selling booths of local products.

Preceding the King’s Cup Long-Boat Race there is a colourful boat processions on the Nan River in front of the Tha Luang Pier and temple, featuring a myriad of boats from all those taking part in the competitions. The event also features various kinds of cultural shows, a beauty pageant, music performances as well as an OTOP Fair and stalls selling a variety of local product.

When: September and October 2016

This is possibly the Kingdoms biggest Long Boat festival with usually around 200 boats competing, from over 100 communities. Each boat can accommodate up to 60 oarsmen, all dressed in the same racing teams uniform, in a double row, they make for an explosion of colour.

The colourfully-painted boats made from whole tree trunks and adorned with an elaborately-crafted naga head at the prow, are once again united with the Nan River in this annual event, that is touched by the history of the once ancient Northern Kingdom of Lanna and makes for a fun filled, gloriously colourful, spectacle

The racing takes place on the Mun River each year  on the first full weekend in November there are usually around 40-50 boats joining the competition from nearby provinces. Other than the racing and on land, visitors can also enjoy the colourful long boat procession and other cultural performances.

Celebrations across Thailand in October for Buddhist Lent

Celebrations at this time of the year are conducted through-out Thailand, with a vast array of different, vibrant festivals to mark the occasion of the end of the Buddhist Lent; each has its own uniqueness and is known by many names. In Thailand’s south the people celebrate this most auspicious occasion with their very own festival of Chak Phra (Phum Pha Pa; literally meaning ‘pulling of the Buddhist Monks’). The north has its spiritual Tak Bat Devo Festival, featuring hundreds of Buddhist monks. The province of Sakon Nakhon features the amazing Wax Castle possession, while in the north east province of Nakhon Phanom you will find the dazzling Fire Boat Possession. Central Thailand offers you the chance to be part of the Lotus Flower Festival and in the Mae Hong Son Province, of North West Thailand you can be part of the uniquely Tai-Yai peoples event, that of the Chong Para Festival.