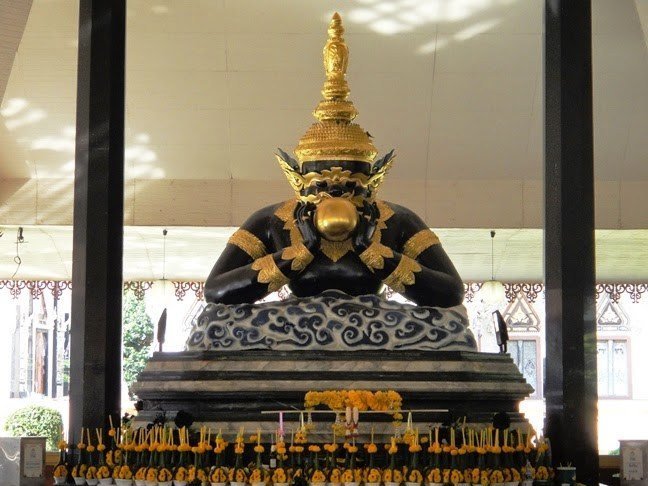 Thailand and the God of Darkness

Solar eclipse in Thailand and the god of darkness

Thailand and the God of Darkness. Did you feel any-thing strange yesterday (10th March 2016)? If things went on as normal you may have to find time to thank the Thai Buddhists who spent yesterday offering prayers to Rahu, the god of darkness who is said to swallow from time to time his two brothers, the moon and the sun, and throw them out again, or more simply put yesterday was the day of a solar eclipse and Rahu is ancient Thai explanation for such an event.

According to certain Thai-animist beliefs, an eclipse takes place when the angry and black God Rahu tries to swallow the sun. The only way to prevent disaster is to scare Rahu away or placate him with offerings. When an eclipse hits, some people will commence clashing gongs and exploding firecrackers to frighten him while other devotees invite dancers to perform in front of his statue.

The symbol of Rahu is the number 8 and there are eight black items that are used to pay homage to the god, such as cola along with items such as black joss sticks and candles

You may be surprised to know there are many temples in Thailand where you can find representations of the God Rahu, the biggest and most popular with Rahu followers is at Wat Srisa Thong, Nakhon Pathom (approx. 56 kms from Bangkok), possibly  because it has a giant statue of Rahu, the biggest in Thailand. Other temples in Bangkok are Wat Traimit inBangkok’s Chinatown and also in Wat Yannawa, otherwise known as the ‘Boat Temple’.

Some Thai people believe that bad luck always comes with an eclipse, so major changes and big losses are inevitable and therefore visits to Wat Srisa Thong become more popular before such events.

Belief in the super natural, spirits, gods and demons lay shoulder to shoulder with the majority of Thai’s beliefs in Buddhism and reaches into their very core values and there are many instances when government departments will look to mystical methods to sort their internal problems.

In 1997 when the Kingdom found itself in an economical crisis, the wife of the then Thai Prime Minister, Chavalit Yongchaiyudh, announced her intention to make an offering to the god Rahu in the belief that it would preserve the life of her husband’s government. History has proven her endeavors were in vain.

Food and Drink to offer the God Rahu

There you have it live goes on, in part to those that either frightened Rahu away or cajoled him into letting his brother go free. That is until the next solar eclipse on the Sept 1st 2016 or the lunar eclipse on Mar 23 2016. You have been warned and you have no excuses; you have plenty of time to stock up on ‘Black Food and Drinks’

Thailand and the God of Darkness. Discover Thailand with Thailand Discovery.