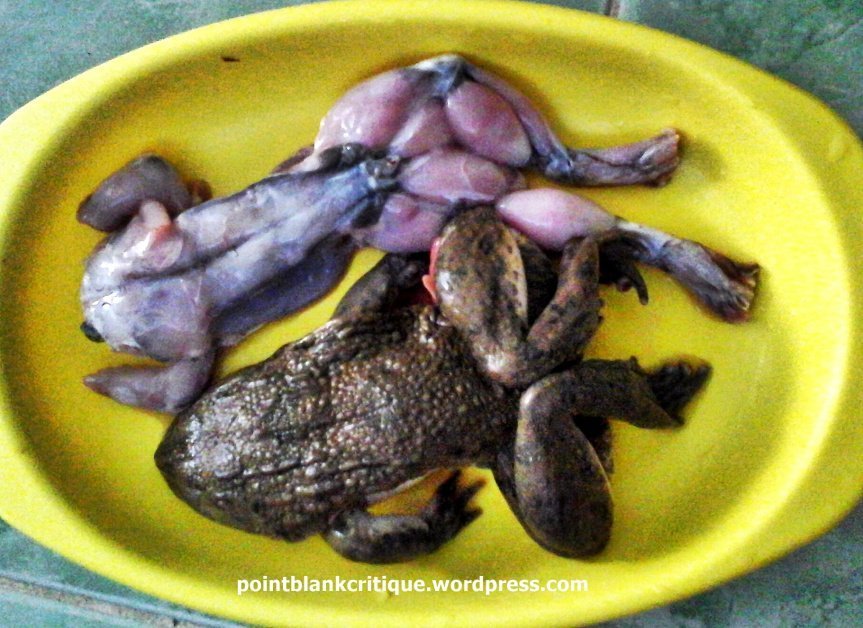 Thai Food Frogs. While the frog is not an uncommon dish even by western standards especially in French cooking, it is considered a delicacy in Thailand. The frog or known as “Kob” กบ in Thai has many functions and one of it as a source of fat-less protein. These frogs are found in rice fields or in the jungles under damp conditions and are of the bullfrog variety so they are fairly huge about the size of a grown adult’s palm with fingers extended. The bigger they are, the more meat and the tastier. These frogs are now cultivated as the demand for them has grown and most villagers make a lucrative living from breeding these frogs for consumption.

Originating from the Northern provinces of Thailand such as Chiang Mai, frog dishes are a staple of the Northern cuisine. Prepared in a variety of ways from curries, grilled to deep fried frogs, each dish is as appetizing as the next. In fact, you would not even know it was frog until you are told as the meat is fat-less, tender and definitely better than even chicken. Ranging from spicy to non-spicy dishes, the frog meat dish can be found either in a typical Thai restaurant, a food court that sells a variety of home cooked economy rice dishes or from a street food stall.

Frogs became a staple in the Thai diet in the north as most of the people in the early days were agriculture based and frogs were plentiful in the rice fields and in the wild. Meat was scarce as to have meat on the table was expensive and beyond the income of the average farmer household. Frogs were a good source of protein, low in fat and high in protein value. Therefore the frog leaped out of the rice fields into the frying pans of Thai cuisine!

In Western cooking, only the frog legs are eaten but in Thai cuisine, most parts of the frog are consumed. The sought after part is the liver and skin. The skin is believed to be good for the collagen while the liver is the tastiest bit of the frog. Some restaurants or street stalls will skin the frogs before cooking while others cook it with the meat and skin attached. The curried spicy frog and the deep fried frog comes highly recommended. Eating deep fried frog marinated with Thai spices is a savory dish with sticky rice or steamed fragrant white jasmine rice.

You can also buy sizable frogs from a wet market but you will probably have to clean it yourself which can be rather messy. This was home cooked Thai/Mon style frog dish using 4 large frogs bought from the local wet market. The 4 frogs costing around THB120 making them about THB30 each. After discarding the heads and innards the frogs were cleaned and quartered. Lemongrass, kefir lime leaves, galangal, ginger, shallots, mint leaves, chili, prawn paste, pounded fresh chili paste, lime juice, chicken stock, fish sauce, fresh coconut milk, salt and pepper were prepared for the cooking.

What turned out in the end was a wonderfully mouth-watering authentic home cooked Thai frog dish known as “Yum Kob” ยำกบ. The frog meat was tender and absorbed the flavors of the herbs and spices beautifully. Eaten with steamed white Jasmine Rice, it seemed 4 frogs were just not enough! If you are adventurous and would like to try a frog dish, you can get them in Chiang Mai or even in Bangkok. Ask a restaurant or street food stall that sells a variety of dishes if they have “Kob” on the menu!