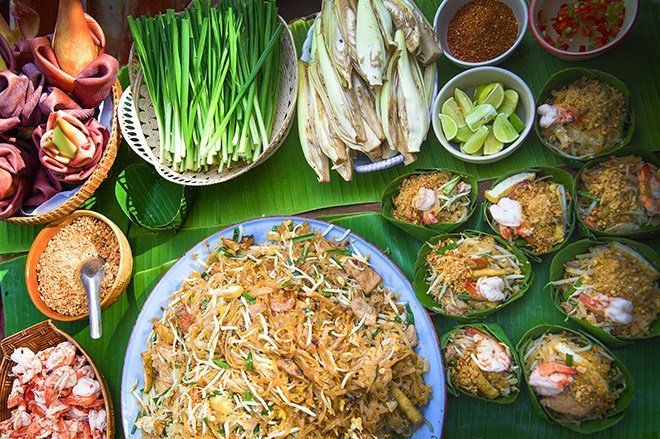 Thai Cuisine. The amazing diversity of Thai cuisine makes Thailand one of the most exciting countries in the world to visit. Thai cuisine encompasses dishes from four distinct regions: the Central Plains, the North, Northeast and the South. The unifying factor is the way each uses spicy, sour, sweet and salty flavours to create vibrant and balanced tastes. Key ingredients include the ubiquitous chili, which is used to add fire to almost every dish. Lime juice and tamarind provide the sour taste while sweetness often comes from palm sugar. The salty flavour is added using fish sauce, known as Nam Pla (fish sauce), Kapi (shrimp paste) or in the landlocked Northeast fermented fish known as Pla Ra.

Thais’ love of eating together is perhaps best illustrated by the frequently heard greeting, Kin Khao Reu Yang (‘Have you eaten yet?’) is the English equivalent to ‘How are you?’. Make sure to read what follows on a full stomach, as it is sure to illicit hunger pains…

Thailand’s Northeast Region, or Isan, is famous for its grilled meats, sticky rice, strong fermented salads and heaped plates of fresh vegetables and herbs. Popular in all four regions of Thailand, Northeast cuisine is also the centrepiece of the country’s gastronomy tourism push and is particularly popular with first-time visitors. It’s also the easiest regional variety to find outside of the region (or overseas) because Isan workers export their food with them when employed away from home. And it’s all about a balance of flavours and tastes.

Spicy, sweet, sour and salty will all be represented on the Isan kitchen table.  The most famed and succulent dishes include Kai Yang (barbecued chicken), served with sweet sauce and sticky glutinous rice, Som Tam (green papaya salad) concocted with mortar and pestle poundings, augmented often with salted egg or small crabs, Lap (spicy ground meat or fish) salads flavoured with lime and mint, grilled pork neck and super spicy sausage. Tasty edible insects are another Isan staple that are a favourite snack for its rice farmers.

Also known as Lanna cuisine, visitors to Chiang Mai fall in love with their first bite of the delicious Khao Soi (curried noodles). Flavour and texture contrasts dominate a red and yellow coconut curried broth, and crunchy noodles are piled on top of the soft noodles with succulent chicken leg meat layered underneath it. There is more to Northern Thai cuisine, however, than Khao Soi.

Perhaps the least well known and understood of Thailand’s regional cuisine, Southern Thai food is characterised by its spice and sharpness. Its curries and flavour profiles are the most powerful, with the heat of the chilli as well as sour tamarind.

Just like the North, Southern Thai cuisine shares flavours from its neighbours, particularly Malaysia and Indonesia. A large Muslim populace, along with many fishing fleets, are the major influences Southern Thai cuisine is based heavily around seafood and meats and uses lots of lemongrass and kaffir lime leaves for flavour. Staples include Kaeng Tai Pla (fermented fish curry), Kaeng Som Pla (hot and sour fish soup), and Kua Kling (dry fried meat curry).  Massaman, a stewed curry of meat and potatoes, is another key specialty.

Cuisine from Thailand’s Central Region probably comes closest to what visitors view as ‘Thai’ food, with well-known dishes; such as, Phat Thai and curry pastes involving the staple ingredients of chillies, garlic, galangal, lemongrass and shrimp paste. Bangkok is at the heart of the area, with its paddy fields, plentiful river fish and fertile soil for crops.

To the untrained eye, much of Thailand’s regional cuisine may be difficult to distinguish from each other. However, by following this guide, visitors can get the most out of Thai cuisine and appreciate the rich diversity of Thailand’s gastronomy and geography through its delicious food.