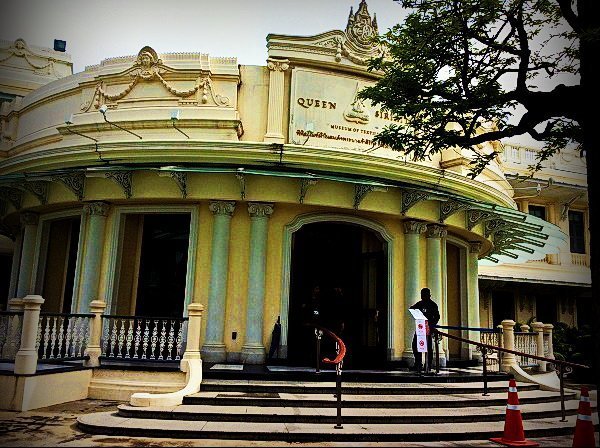 Queens Museum of Textiles. The fairy tale stories of a Queen and the wonderful dresses she wears have mostly been the dream of many a young girl. What has not been written about the fabulous collection of gowns and dresses worn by HRH Queen Sirikit has many of us wondering in awe of her dressing styles and designs. Would it not be fascinating to have a glimpse of the royal wardrobe collection of one of the most stylish Royal family members in the world?

Not wanting to retell the story of the past exhibits in this lesser known but not less fascinating museums in the grounds of the Royal Grand Palace, I can only tell you that it is well worth the visit even if you have no idea about what to expect.

Queens Museum of Textiles. Her Majesty, Queen Sirikit was in very many ways like her late husband His Majesty King Bhumibol Adulyadej who was not only innovative but also creative, artistic and both, people of many talents. While the King delved into his Kingdom building it through sustainable projects, the Queen was busy making use of her talents and love for fabrics and materials of the Thai variety to create an ensemble of wonderful official Royal wear styles for all occasions and the performing arts.

Queens Museum of Textiles. Working with international fashion and fabric designers, she created some of the most beautiful gowns, Thai cultural and performing arts clothing as well as official wear on the many occasions she has been seen and photographed in public appearances around the world. Through the combined efforts of HM queen Sirikit and Pierre Balmain, the Queen achieved a membership in the famous and prestigious International Best Dressed List, thereby bringing to the forefront recognition for Thailand and Thai fabrics into the international fashion arena.

Queens Museum of Textiles. The Queen Sirikit Museum of Textiles was created to commemorate the recognition of efforts placed to increase the visibility of Thai fabrics, preservation of the traditional Thai fabric making arts and the historical values of the beautiful traditional Thai costume, which is a national cultural treasure. It is also a very special gift from the Queen to the people of Thailand so that they can understand, treasure and preserve this remarkable Thai craft and Thai heritage.

Queens Museum of Textiles. Located in the Ratsadakorn-bhibhathana Building within the compound of the Royal Grand Palace, this museum is located to the right of the main visitor’s entrance and the price of visiting the museum is already included in the entrance fee to the Royal Grand Palace. The lower ground of the building has five areas consisting of the lobby and reception area, an auditorium, the museum shop, a library and the education studio. The upper floor has four sections of display and galleries. The first is the Dressing Gods and Demons (Costume for Khon) section, and other galleries were a display of the “Fit for a Queen” exhibits of dresses created with the help of fashion couturier Pierre Balmain.

Queens Museum of Textiles. Photography is not allowed in the galleries and exhibit areas and for one to fully appreciate the beauty of the creations, there is that old cliche to “go and see it with your own eyes”. Wile you are there, admire the beauty of the wonderful textures, the designs and the the efforts made to utilize beautiful Thai fabrics with western designs.

Queens Museum of Textiles. One of my favorite part of the exhibits is off course the development of Khon costumes in the Gods and Demons exhibit hall. Here you can learn first-hand about the history of the costumes used in the Khon performances, what is the significance of each piece of dressing and what it was made off. The intricate workmanship that has gone into developing the costumes into the beautiful traditional Thai Khon performances that you see today.

This exhibit was recently established to commemorate the 84th Birthday anniversary of HM Queen Sirikit. She established the SUPPORT foundation to study and develop the Khon art form from the dressing to the jewelry and masks. The first rendition of the new costumes was introduced in 2007 and because it was so well received, the event was eventually held annually under the patronage of Her Majesty under the name of “Khon Phra Rajatan” or Royal Khon Performance.

There is a room on the ground floor that would also appeal to visitors which is the education studio. Here you can dress as a Khon performer or indulge in souvenirs of printed Khon costume designs for those who love coloring them, face masks and even rubber stamps for postcards from the museum to commemorate your visit there.

Make sure that you do not miss this quaint little museum especially while you are visiting the Grand Palace and indulge your curiosity in the origins of Thai textiles while pondering over the fashion that is truly “Fit for a Queen”.

Please do note that there are a few requirements prior to entering the exhibit halls: