The Top 12 Things to do on Koh Samui Island 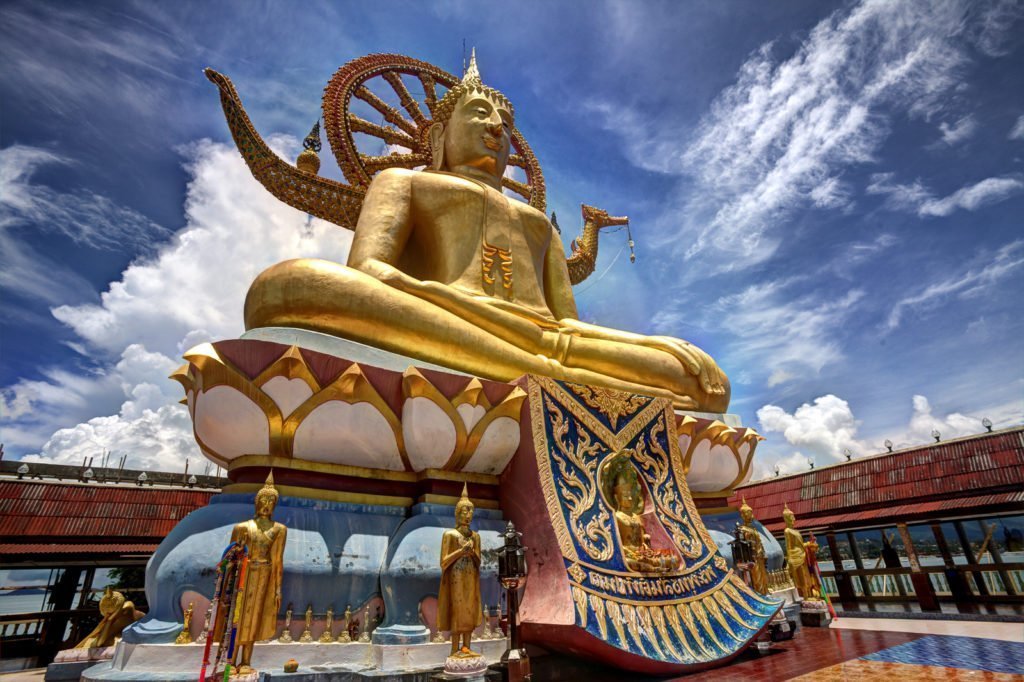 The best known and most famous of all the landmarks on this island is the Big Buddha temple. Sitting just off the corner of Koh Samui on a little tiny island is a 12 meter tall statue of Buddha in a seated position. The local name for the temple is Wat Phra Yai and it is connected to the main island by a causeway. Made of gold and sitting in the Mara position it shows a time when Buddha was rejecting all temptations that were forced upon him. When you fly into Koh Samui the statue is usually the first thing that you will spot due to its prominent location. There are a few food and amulet stalls at the temple which are also worth looking at either when you arrive or depart. 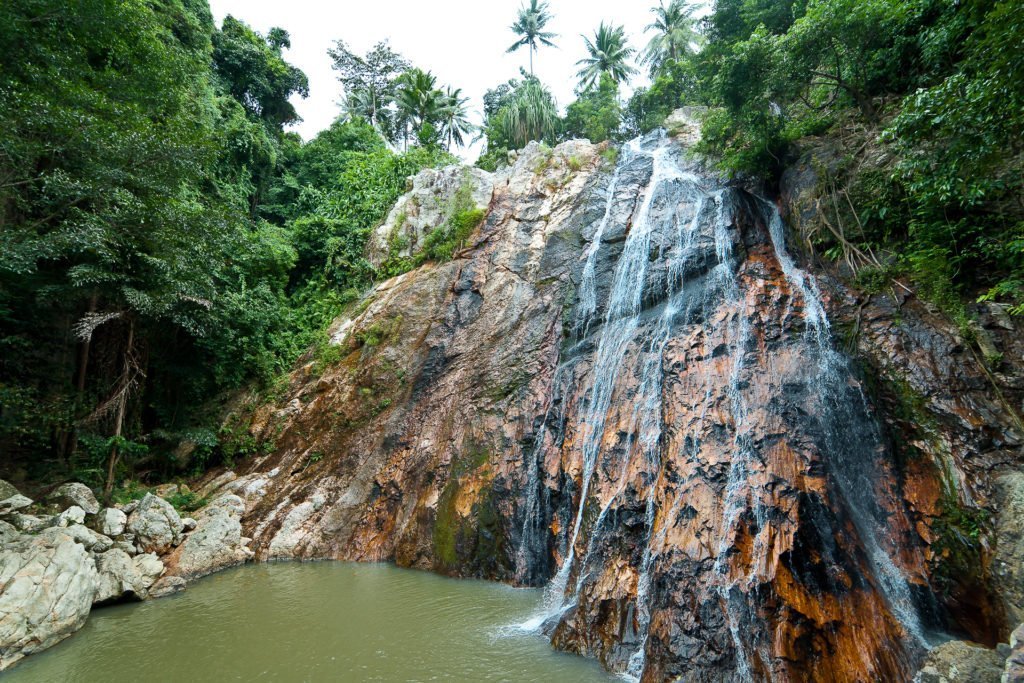 Set in Jungle surroundings are two beautiful waterfalls that are certainly worth a visit, the waterfalls are known as Na Muang 1 and Na Muang 2, the first waterfall flows into a small pool that you can swim in, the second waterfall is about thirty minutes further uphill and is also just as stunning. The park featuring the waterfall is completely free of charge and there are lots of beautiful spots along the way as well as small food stalls and souvenir huts to make purchases from. With many tourists choosing to go to the various beaches this makes for a nice change and an idyllic spot for a swim 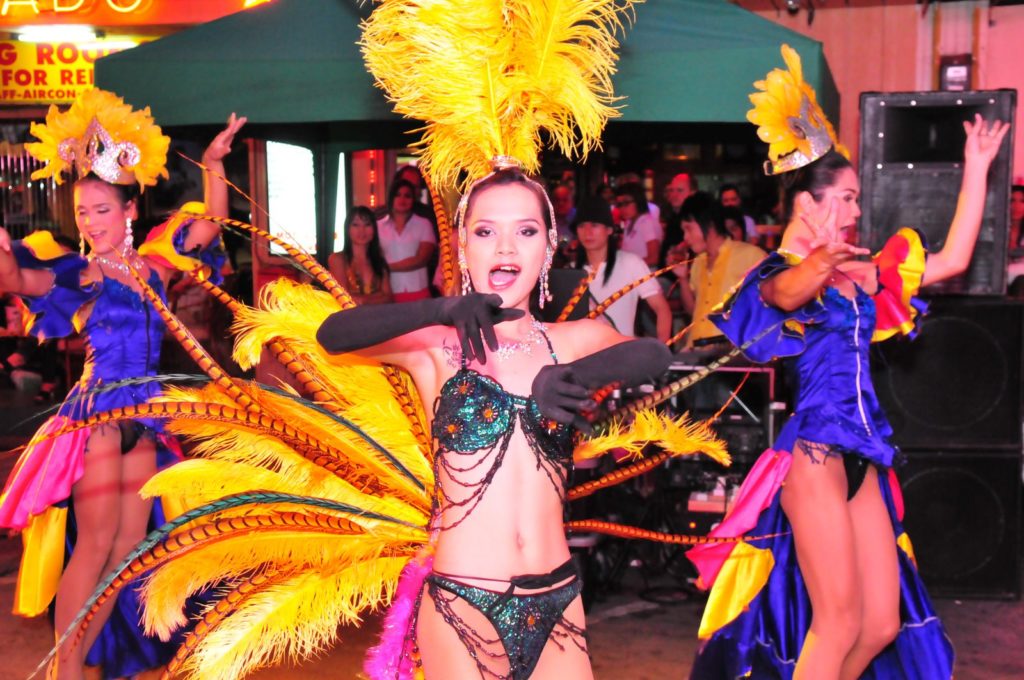 When you are in the area near Chaweng Beach there are many different ladyboys shows on offer, they are all close to each other and vying for your hard earned money so competition is fierce and you will often find they are trying to drag you into their show. The shows usually consist of popular songs being lip synced whilst the performers wear beautiful costumers and make up, the ladyboys are all at various stages of their journey but in most cases it is very hard to tell that they are men. The shows are light hearted so sit back and enjoy. 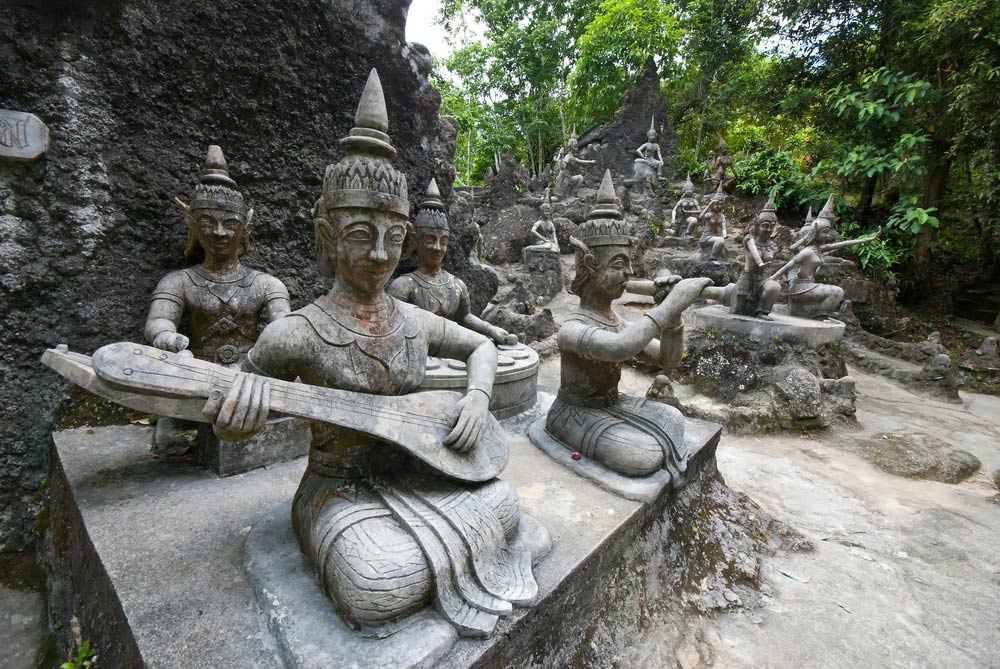 Back in 1976 Nim Thongsuk started putting up many beautiful statues in the land that he and his family owned, the land is hidden away in the center of the island and surrounded by lush forests. The area is very peaceful and has a stream as well as a waterfall, a journey to the garden is a challenge as the road leading to it is very steep, if you have a four wheel drive you will be fine. From the top most point of the garden you can enjoy panoramic views over the island and take in all its splendor and beauty. 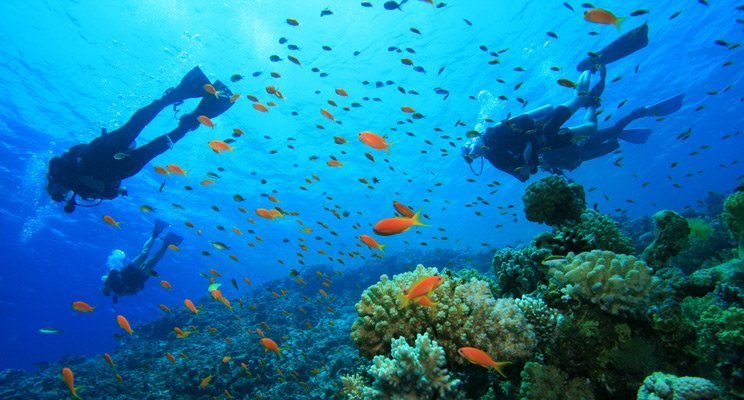 The Gulf of Thailand is an absolute paradise for diving fanatics and you can get tours from reputable PADI certified instructors who will take you on a boat trip to see the marine life for yourself. The best diving area is 60 kilometers out from Koh Samui so you will go out on a big boat with the other divers and participate in a two dive course. Each dive usually lasts about 40 to 50 minutes and is suitable for complete beginners. If you are going to go diving make sure you always check the schools certificates are current and that you are completely happy with all their safety procedures. 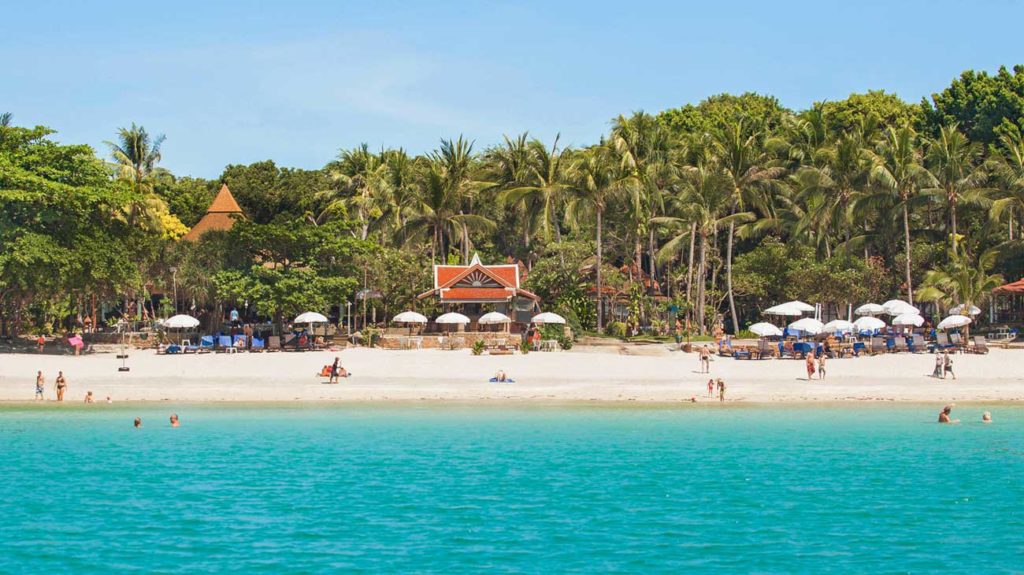 Chaweng Beach is the hub of Koh Samui, it is the biggest and largest town and has the busiest and possibly most beautiful beach. This is also where the main nightlife is located with plenty of bars and restaurants to keep everyone happy. The strip in Chaweng is nearly three kilometers long and the young and young at heart make their way from one bar to another taking advantage of the cheap drinks and the loud music. If you want a drink in quieter surroundings then there are also some nice beach front bars offering a relaxing view and see breeze to help you wind down of an evening.

7. The Laidback Life At Lamai Beach

Unlike Chaweng Beach, Lamai Beach is a lot quieter and not as busy. The beach is just as beautiful though so if you like the quieter life this is the place to head. The water is deeper at this part of the island making it better if you want to go swimming. Like most beaches in Koh Samui there are a selection of beach bars and restaurants selling cocktails and good food, meaning you never have to wander too far when you are hungry and thirsty. If you do leave the beach there is a main road which also has a lot of places to eat and drink.

Lipa Noi Beach is the most child friendly of the beaches on Koh Samui, the water is completely clear of rocks and coral and the beach has beautiful white sand stretching along it. The water remains shallow for a very long way and it is not till you get over 100m out that it starts to get deep. The area is quite remote and you will notice upon arrival that it is a place for relaxing rather than partying, there are several restaurants around selling delicious seafood which are worth stopping for lunch at.

9. See Something Different At Fisherman’s Village 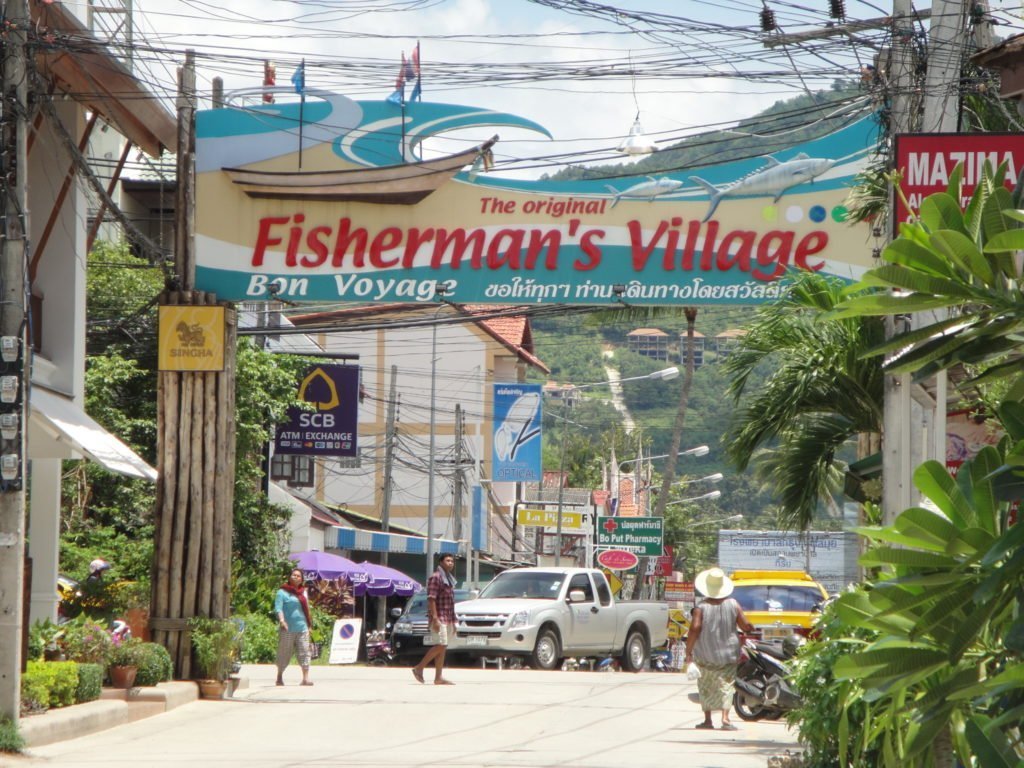 Away from the busyness of Lamai and Chaweng is a gorgeous little fishing village called Bophut. The village is growing in popularity but it is still quiet enough that you can enjoy the tranquil beach or a coffee in one of the nearby restaurants. When you are in the village you will see there are various original wooden homes, these were built in the 19th century by a group of Chinese immigrants that set up home here. The village is worth exploring and even has its own walking street full of eating places, food stalls and cafés.hut

10. Go For A Hike At Elephant Rock 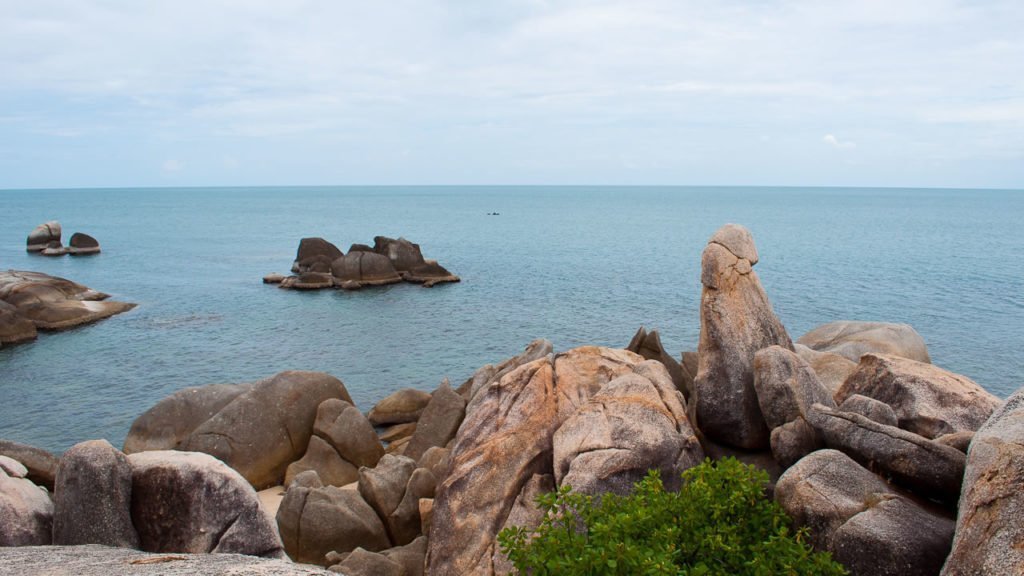 Elephant rock actually looks nothing like an elephant but the size of the rock formation was where the name originated from, the rock is located in-between Chawang and Lamai Beach. The rock itself is in a very peaceful area so if you feel like some time away from all the activity this is the place to go. There are plenty of spots to go for a hike around this area and if you climb to the summit you will be greeted with beautiful views of the Gulf of Thailand.

The Ang Thong National Marine Park is visited by catching a boat that leaves from Koh Samui, it is an archipelago made of 42 islands sitting in the Gulf of Thailand. The area covers more than 100 square kilometers and consists of mountains, jungles and white sandy beaches, there are also coves, waterfalls and lakes to explore whilst on your trip. The area itself is protected and home to a wide variety of exotic creatures. You can choose to camp the night on one of the islands by hiring a tent during your tour. In the novel ‘The Beach’ Ang Thong was the location where the backpackers set up their secret camp, the movie however was filmed on Koh Phi Phi.

12. Take In The Interesting Sights At Hin Ta And Hin Yai 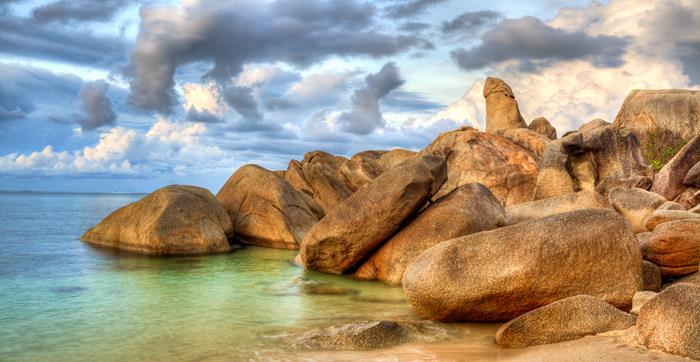 All throughout Thailand you will see things that shock and surprise you, but maybe nothing quite like this. The rocks were discovered by locals many years ago and are naturally shaped to look like male and female genitalia. The rocks have been fondly named Ta (Grandpa) and Yai (Grandma.) The rocks have a story that has become part of folklore over the years and you can see the story on a sign as you get closer to the rocks, the story goes that an old couple called Ta Kreng and Yai Riem were traveling to a neighboring province to see a man called Ta Monglai to ask that his daughter marry their son, on the way the boat ran into a storm and they died at sea. The couple then turned into rocks as a symbol of their intentions.