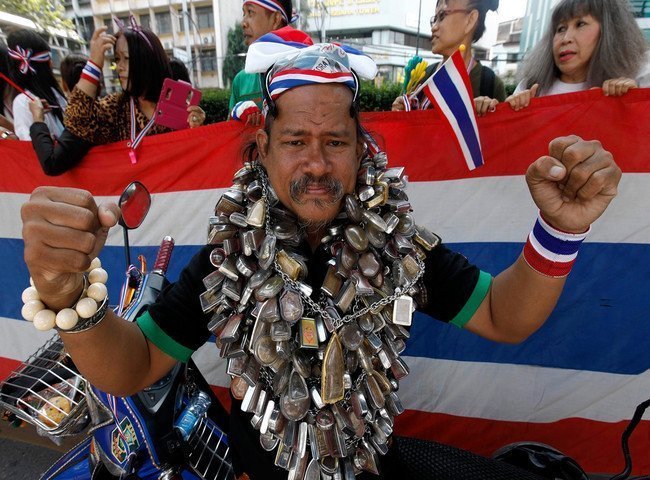 Black Magic and Thai Amulets. When visiting Thailand you may well notice many Thai people (and more and more farangs), both male and female wearing Buddhist amulets around their necks (พระเครื่อง prá-krûeang), these amulets are viewed by most Thai people as sacred objects that are created and blessed by monks.

Legend has it that in Thailand’s long distance past and during a devastating drought that had tormented the Kingdom, a renowned Monk was invited by the then King to go to a particular province and help ease the situation. Before leaving and unable to take a large Buddha statue from his temple, he dreamed that the statue told him to make a smaller replica of himself, from clay found in the temple and take that instead. He did as the dream had told him and made a replica of the large Buddha which he took with him to the province. Later the drought eased, later still he gave this amulet to the King, who asked the monk to make other amulets and spread them among the people

Most Thai amulets feature Buddha images, while others may depict the image of a famous monk, or even images of the monks who made the amulet. There are also amulets that depict demons, Kuman Thong, Nawagote, Nong Kwak, Pidda (Pidta), tigers, dragons and Saliga (love-birds).

Amulets come in a variety of different materials such as plaster, bone, wood, glass, metal, precious stone, gold and silver and even a greater variety of shapes and sizes. Some may contain the ash from incenses or old temple buildings, or the dirt from specific graveyards, while others may hold  pollen, herbs, metal bars (with Scripture carved on) and yet others may contain hair or blood from a famous monk, the later are believed to add further protectoral power to the amulet.

Once the amulet is crafted, the maker will chant, (alone or in the company of other monks) pray and bless the amulet, a process that may take from one week to 3 years.

The power in the amulet is not based on the price paid for it or its size, the spiritual power it possesses depends on the creator and its price is a reflection on the scarcity of the maker and the year it was made. Some Luang Phor Tuad, Somdej, and Buddha amulets sell for hundreds of thousands of dollars USD.

Traditionally amulets were not purchased, to procure an amulet a worshipper would attend a temple and make a donation of money or goods (make Merit) such as oil, food, clothing etc. items the monks needed to survive. In return monks would provide the donor an amulet. While this is still the case today in many temples across the Kingdom, amulets can be purchased online or indeed from street vendors, but there is no guarantee who made it and whether it has ever been blessed by monks.

Amulets are never worn below the waist, Takrut (without monk/ buddhist image), can be put inside your pants pocket, nor are they ever to be taken into improper places such as brothels or when actually or watching others having sex or fighting. You should Never ever touch another person’s amulet without their express permission.

Thai people will wear an amulet (in the front or the back of the neck), with specific amulets believed to help in marriage, wealth, health, love and relationships.  Some of the more desperate people who want their amulets to bring them ‘Fast Luck’ may wear amulets made from ‘kadok pi'(spirited bones) or ‘nam man prai'(spirited corpse oil). Most Thai peoples wear amulets in odd numbers such as one, three, and five and so on.

It is also a tradition to place Thai amulets under a stupa or other temple structure when it is built.

What do specific amulets do?

Listed below are just a few of the types of amulets you will find along with their spiritual meaning. It is worth noting that there are a number of different forms of Buddhism and the meanings here maybe different for each sect.

Butterfly Amulet:  For trade and relationships and for women to attract a man

Trimurti:  For love, happiness, and for wishes to be granted.

Ganesha / Ganesh: The Hindu elephant god of obstacles – Both for placing and eliminating them. This is for art, luck, and harmony in life; having a good, smooth life, without complications.

Kwan Yin: The goddess of compassion – These amulets are for those that need healing and empathy.

Nong Kwak: The woman calling with one hand to passerby’s – This is for business prosperity and growing a healthy business. If you look in most Chinese businesses across Asia and in the USA even, there is often a Nong Kwak amulet, image, statue, and or yang flag in a special shrine in the front of the business.

Phra Pid Ta: The monk that covers his eyes – For protection from evil spirits, influences, and for wealth.

Salika: Two birds facing each other – This is for success in business.

Phra Somdej: Prosperity in business, peace, and a good life.

Chinnarat / Jinnaraj Buddha: The Buddha amulets with the triangle behind, outlining the Buddha with wisps of fire rising off the sides – This is for defense against evil and a generally smooth life.

Rahu: The eclipse demon seen eating the moon on various amulets – This is a reminder of beneficence.

The Spread of Amulets

Wearing of these signs of faith has become ever more popular and not just in Thailand, China media reports that people are wearing Buddha Amulets as a fashion statement in countries like Singapore, Malaysia, Hong Kong, Taiwan and more recently mainland China, where sales have doubled in 2 years and cities such as Beijing who only had 3 shops selling the amulets in 2005 have more than 3,000 by 2013

Thai people are generally very superstitious and Amulets fit snuggly within both Thai spiritual beliefs and Buddhism, outsiders may view these beliefs as being opposing views, but the people of this Kingdom have for centuries led their lives with one foot in each camp. Amulets are another example of how inanimate objects can be magical and how monks are said to possess certain supernatural powers.

Across Thailand, Facts on Thailand