A Buddhist monk walks past a tiger before officials start moving them, May 30, 2016. Photo: Reuter 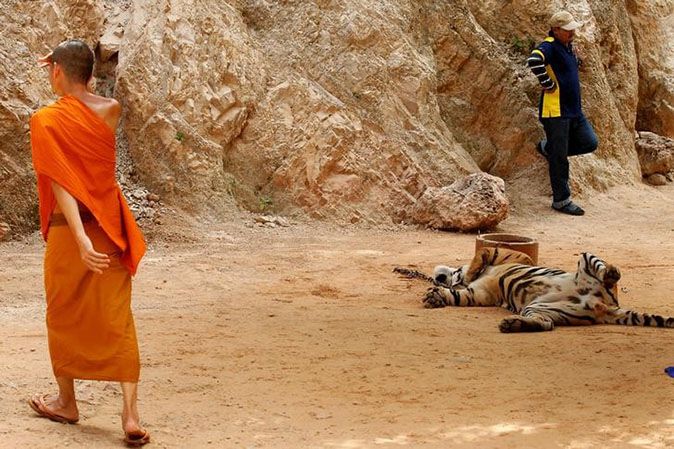 WWF applauds govt’s removal of Tigers from Temple. WWF commends the Department of National Parks, Wildlife and Plant Conservation (DNP) for taking definitive action to permanently remove the tigers from the “Tiger Temple” and relocate them to DNP facilities in Ratchaburi.

“WWF was dismayed last month when the Tiger Temple was granted an official zoo permit by the DNP. This was despite longstanding allegations and ample evidence that the Tiger Temple is trafficking tigers into the illegal wildlife trade. This week’s actions to remove the tigers from the Tiger Temple are long overdue and we strongly encourage DNP to make the removal of the tigers permanent,” said Yowalak Thiarachow, Country Director, WWF-Thailand in a statement today.

WWF’s statement said other facilities with captive tigers should also be investigated to ensure tigers are not falling prey to illegal wildlife trafficking and abuse. Facilities found in violation of international and national wildlife laws must be prohibited from acquiring, owning and breeding tigers.

The “Tiger Temple Report” by the Australian conservation group Cee4life, released in January of this year, contained shocking allegations that the Tiger Temple was trafficking wildlife through Laos. This breaks both CITES (the Convention on International Trade in Endangered Species of Wild Fauna and Flora) regulations and Thai law.  According to Thailand’s Wild Animal Reservation and Protection Act B.E. 2535, importing or exporting of tigers and their carcasses is prohibited by law and subject to a maximum of four years imprisonment and/or a THB40,000 fine.

This report reinforces long held suspicion that the Tiger Temple has been posing as a sanctuary for tigers while secretly acting as a tiger farm and selling tigers and tiger parts on the black market for an enormous profit.

This morning, more than 40 dead tiger cubs were found in a freezer in the kitchen area at the Tiger Temple. Adisorn Nuchdamrong, deputy director-general of DNP believes there must be a reason that the temple preserved them.

“They must be of some value for the temple to keep them,” he told Reuters. “But for what is beyond me.”

The number of tigers living at the temple has increased from 18 in 2007 to 147 in 2016 and direct contact with the paying public continued until the temple was closed a few days ago.  Closing the Tiger Temple and similar facilities ends an illegal, corrupt, and cruel trade and enable the DNP to focus their efforts on increasing the number of wild tigers in the country.

According to DNP, Thailand has an estimated 1200-1300 captive tigers in at least 33 facilities. For years, tigers in captivity has put a black mark on the country’s reputation as a leader in tiger conservation, undermining the efforts Thailand has made to protect and conserve tigers in the wild.

WWF also encourages the DNP to ensure that the removed tigers are microchipped and kept in legal, approved, secure facilities where they will not be abused or fall victim to the illegal wildlife trade.

The organization recommends that the current action to remove the tigers be permanent and that the Tiger Temple face legal action for illegally keeping captive tigers.
WWF also said the allegations on the abuse and trafficking of tigers must be probed.