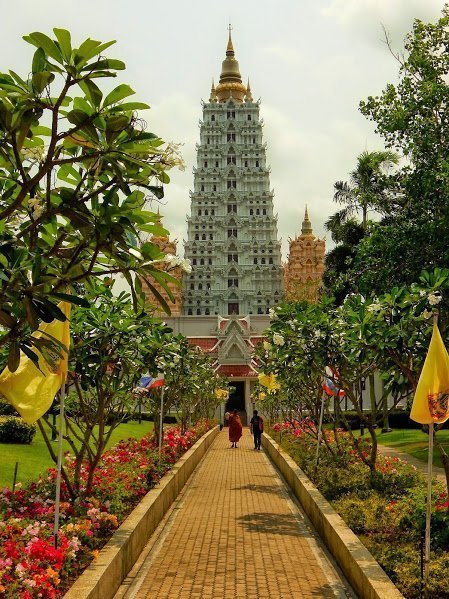 Sprawling in a gigantic complex of about 145 acres, the Wat Yansangwararam is home to various buildings of a plethora of architectural styles, dotting a gorgeously landscaped garden and a large lake, which give the place a peaceful and tranquil aura. Just as you enter the place,  you will find yourself in a Chinese Temple with a magnificent museum displaying a spellbinding collection of antiques and artefacts.This is called the Viharn Sien, and is only one of its kind in the entire Thailand.

Wat Yansangwararam or Wat Yanm as it is colloquially called, is known far and wide for the modern influences in the main temple complex, which is built differently from traditional Thai temples. Inside the temple, you will be able to see a replica of Buddha’s footprint in a pavilion known as mondop or mandapa. As you proceed,  you will also spot a huge, white coloured, Stupa like structure called the Chedi, which contains numerous relics of the Buddha and his followers.

Some of the varied architectural styles you can see here are Swiss, Japanese, Indian, Lana Thai and Chinese, thanks to the numerous building in the complex. Not home to temples alone, the complex also houses quite a few monuments, like the one of KingPrajadhipok. Constructed not too long back in the 1970s, Wat Yan wasbuilt in the honour of Supreme PatriarchSomdejPhraYanasangworn, the head of the Thai Monastic Order then. Today, the complex is under the patronage of the current Thai King, King BhumibolAdulyadej (Rama IX). One particular spot in the temple complex, gives you a sweeping view of the giganticKhaoCheejan, or the golden Buddha mountain far away in the distance.Other facilities in the complex include a restaurant, and a meditation centre that imparts lessons and holds workshops.