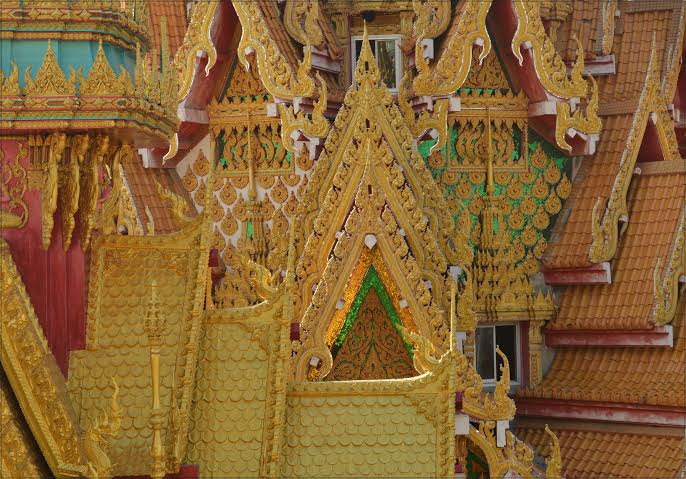 (Thai: กาญจนบุรี (Pronunciation)) is a town (thesaban mueang) in the west of Thailand and the capital ofKanchanaburi Province. In 2006 it had a population of 31,327. The town covers the complete tambon Ban Nuea and Ban Tai and parts of Pak Phraek and Tha Makham, all of Mueang Kanchanaburi district, and parts of the tambon Tha Lo of Tha Muang district. Kanchanaburi lies 123 km west of Bangkok.

In the late 19th century, Kanchanaburi was established by King Rama I as a defensive outpost against possible Burmese attacks in what is now Lat Ya subdistrict. In 1833, the town was moved about 16 km towards the south-east along the river to its present site during the reign of King Rama III.

Wat Tham Sua Kanchanaburi. Kanchanaburi has a tropical savanna climate (Köppen climate classification Aw). Winters are dry and very warm. Temperatures rise until April, which is very hot with the average daily maximum at 38.2 °C (100.8 °F). The monsoon season runs from May through October, with heavy rain and somewhat cooler temperatures during the day, although nights remain warm.

Kanchanaburi, which is where the Khwae Noi and Khwae Yai Rivers converge into the Mae Klong River, spans the northern banks of the river and is a popular spot for travelers. Its location at the edge of a mountain range keeps it much cooler than the other provinces of central Thailand. The city has two major commercial districts: the downtown area consists of a grid of several streets with office buildings, shop fronts, and a shopping mall; and the riverfront area businesses are mostly further west along River Kwai Road. Once a year a carnival comes to town and is set up in the area next to the bridge. At night there is a small pyrotechnics display that re-enacts the wartime bombing of the bridge.