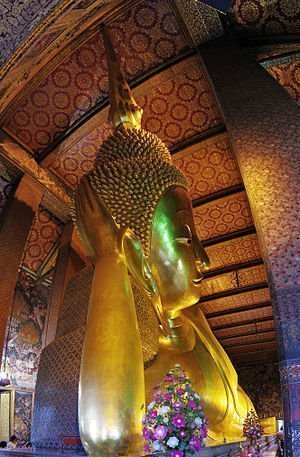 Wat Pho Bangkok is named after a monastery in India where Buddha is believed to have lived.[5] Prior to the temple’s founding, the site was a centre of education for traditional Thai medicine, and statues were created showing yoga positions. An enormous Buddha image from Ayuthaya’s Wat Phra Si Sanphet was destroyed by the Burmese in 1767; King Rama I (1782-1809 A.D.) incorporated its fragments to build a temple to enlarge and renovate the complex.[6] The complex underwent many changes in the next 260 years. Under King Rama III (1824-1851 A.D.), plaques inscribed with medical texts were placed around the temple.[7] These received recognition in the Memory of the World Programme launched by UNESCO on February 21, 2008.[8] Adjacent to the building housing the Reclining Buddha is a small raised garden, the centrepiece being a bodhi tree which is believed to have been propagated from the original tree in India where Buddha sat while awaiting enlightenment. The temple was created as a restoration of an earlier temple on the same site, Wat Phodharam, with the work beginning in 1788. The temple was restored and extended in the reign of King Rama III, and was restored again in 1982.