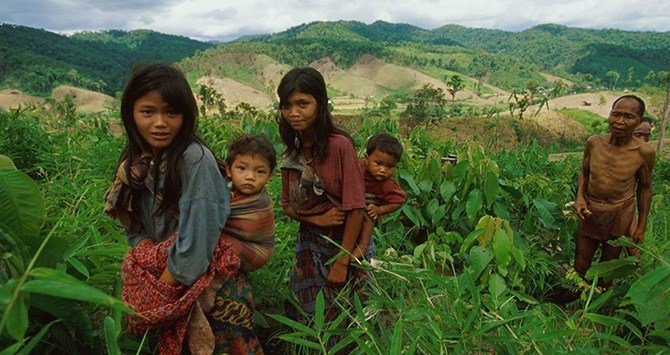 Tribal Thailand Indigenous Tribe. The Mlabri are a first world people, currently going through a transformation process, which has taken others thousands of years…… and which could cost them their identity.

Most articles written about Thailand’s smallest of tribes, (who have been called “the most interesting and least understood people in Southeast Asia”), suggest the first Western people to come across these, elusive nomadic jungle people came in 1936, when an Austrian explorer Dr H Bernatzik, conducted a survey on the people inhabiting the forests of Nan Province Northern Thailand.

Yet earlier articles published in the Journal of Siam Society in the 1920s, when forestry staff of the East Asiatic Company wrote, that at the time, they were thought to be possibly, the last people on the planet to go completely unclothed.

The issue of who in the west was first; is possibly down to correctly naming of these shy aboriginal people, who have no written language and chose to call themselves what-ever they like.

A brief description about the Mlabri was found in a book written by a Thai elite in 1886 (Khun Prachakhadikit cited by Thongchai Winichakul 2000: 46).

What’s in a Name?

The Mlabri (มลาบรี), refers to people living in the forest, consists of two words; “Mla” means “people” and “Bri” means “forest”. Thai people refer to them as Phil Thong Leung or Phi Tong Lueang (“Spirits of the Yellow Leaves”); the expression comes from the Thai view of their nomadic life style.

They would move to another place whenever the banana leaves (tong) covering the roofs of their shelters turned yellow (lueang). Added to this, it was also said that they could move as quickly as if they were spirits (phi).

While in Lao they are known as Kha Tong Luang (“Slaves of the Yellow Leaves”). To add to the confusion early ethnographic works (e.g. Bernatzik 1951; Young 1961) proposed the term, ‘Yumbri’, which has the same meaning, (Yellow Leaves) and Ma Ku.

It is said the term of Mlabri is not liked by the actual people, they prefer Khon Pa (which is a direct translation of the word Mla Bri into Thai; or people of the jungle) and the more often used Khon Tong Luang, meaning, Yellow leaf People. Other reports state they prefer the term “Mlaq” (Human Beings) or “Mlaq Brig”.

The most recent survey puts their number at 357 in settlements in both Nan and Phrae Provinces. Sakkarin Na Nan Rajamangala, 2010 University of Technology Lanna Nan.

The Mla Bri are believed to be a relic population of the Mon-Khmer, who occupied much of Southeast Asia prior to the migrations of Tai groups into Laos and northern Thailand, eons before the formation of the Thai people, and long before almost all of the present day hill tribes.

It is believed that the Mla Bri once lived right across Northern Thailand, numbering many thousands arriving; it is assumed from Lao roughly in the late 1800s. Further speculation puts their emergence prior to this from Southern Indochina, yet with no written language, an ever pervasive secrecy from the outside world, combined with their unwillingness to settle in one area, means their true origins are as yet unknown.

More recently, genetic research carried out, has provided (contested) additional speculation about their true origin and past lifestyles. What can be agreed upon is that they are, a quietly and rapidly vanishing ethnic group of Thailand and Laos.

Their language (possibly) belongs to the Northern Mon – Khmer – Two other people in the North of Thailand, also have the same language the ‘Kmhmu (Khmu, Kammu) and Tin, who call the Mla Bri, Kha Hok (Spear People).

Facts and details in their pages reference to Hill Tribes writes:

‘Little is known about their belief system other than that they believe they cannot cultivate land themselves; tigers are angry souls of the dead; and heavy rains, which they call “monster farts,” can swallow up people whole.

Many can’t recognize their own faces in photographs or mirrors.

While the Chaing Mai University writes:

‘The Tong Lueang people believe in mysterious powers similar to other hill tribes such as spirits and demons. They are animists who believe that there are supernatural powers that control their lives; so worship ceremonies to them are performed when one becomes ill. Moreover, every full moon night, the Tong Lueang set up food offering rites to the spirits they believe in along with a feast and dance around their spears tied in a bundle and placed in the middle of the dance ring. Their dance is a simple gesture, swinging their bodies while walking in a circle and flipping their hands along with murmuring the lyric to the music.

They have a strong belief inherited from their ancestors that if they stay in one place too long without moving on, the bad spirits will destroy them. Thus, this is the reason they constantly move to a new place every 5-10 days’.

As already mentioned their name comes from the very structure they call home, rough leaf shelters, one for each family, which are erected far from any outsiders. Made up of a short wind screen, seldom more than 1 meter high, which are interlaced with leaves and set at an angle, propped up by a stick. When the leaf shelter withers and turns colour, normally within 5-10 days the Phi Tong Luang would move onto a new site, hence their name; “Spirits of the Yellow Leaves”

In the reported meeting in 1924, it was written: the small statue people, with thick lower limbs (thought to come from their life in the hills), were a very shy, timid and easily frightened people. Having in former times been much maltreated by the people of Lao, who used to hunt them down and kill them like wild animals

In 1989, another expedition, noted that the people had not known a stone age and so had no pottery, could not make their own clothes, did not practice agriculture, build homes and did not wear ornaments. (Any of which would have provided archaeological material which could have been dated and helped map a time line for the people).

Unlike many of their mistrusted neighbours they did not trap their prey, or use dogs regularly in hunting, nor did they use bows and arrows, relying mainly on long lances or spears. Measuring 11 feet and made from pliable but incredibly strong, palm stems tipped with iron and bartered from other Hill Tribes, including the Hmong. The spears were sometimes dipped in poison (unlike any other hill tribe) obtained from a leathery plant grown on specific hill tops.

The poison is used sparingly, as it was said to be so strong, a simple scratch could kill an elephant, therefore the prey hit by these spears, had to be found quickly, before the poison would travel throughout the beast, making it unsafe to eat.

During the 60s and 70s rapid teak harvesting and the slow conversion, of the mountainous landscape away from opium production, into monoculture farms closed in on the Mla Bri way of life. In recent times, these expert jungle dwellers, could use their knowledge of the forest to trade with local Hmong and other Northern Thai villagers, then simply retreat back into their jungle, picking and choosing when and how they interacted with “outsiders”. But as the jungle began to fade their ability to trade and remain secluded from other communities became impossible.

The permanent villages they live in today provide them with houses made of cinderblock and wood, with metal roofs and electricity. Their children have started going to public schools, and their health care has improved. While still in part hunting and gathering, the Mla Bri now engage in highland farming and hammock weaving, (brought to them by Christine missionaries, who saw this as their opportunity to turn these simple people, to Christianity, and reportedly the biggest threat to their very existance), besides working as day laborers.

That said, they are still seen as the poorest of the present day Hill Tribes, borne out in the distressed clothes, they are commonly seen wearing. Many scholars mention the fact, that while the Mla Bri do have numbers in their language they rarely use them, leading to them being easily cheated when it comes to bartering for both goods e.g. wild honey, roots etc for clothing or to act as laborers for other Hill Tribes farms.

Sharing is a way of life

Another issue for these people; is their very nature of sharing everything with one other. This has meant that while some will stick to their long held beliefs, of not farming the land, those that choose to break from tradition. Who take up a complete new way of life, toiling very long hours on the land; do so only to share the spoils of their labor, with those that do nothing, leading to disputes and the potential break-up of the tribe.

As former hunter-gatherers, the Mla Bri once lived on what was around them, with their beliefs binding them to their nomadic life. Their animistic beliefs prohibited them from cultivating the land; doing so would wake the spirits of the forest who would in turn send a tiger to kill them all.

Fast forward and the same people have no option but to conform to present day realities, but change is coming at a cost.

With the break-up of family units, as the young move out to find work and assimilate into modern day Thai culture, combined with the differences, with those that break with tradition and those that don’t, means the Mla Bri plight has all the hallmarks to the present day aboriginals of Australia.

As this fairly recent confrontation with the modern world takes its toll, it is reported that the Mla Bri suicide rate has risen alarmingly in recent years, in the older village members who find it more difficult to let go of their past.

Some anthropologist, believe some may still migrate in the traditional way. But most agree they will become assimilated into Thai society within one or two generations. [Source: Joe Cummings, Lonely Planet].

Their plight is further exsasperated, in the fact that the anthropological record of early man, clearly shows health took a nosedive when populations, made the switch from hunting and gathering to agriculture.

Indications of ill health abounded among the first farmers.  Tooth decay became prominent along with high infant mortality, iron deficiencies, and an increase in disease, from live stock and contact with other people.

While more recent history proves the health benefits of being Hunter Gatherers; in the seventeenth century, the lifespan of an average European was around 40 years, while colonists to Massachusetts (where they had by necessity had a partly hunter-gatherer diet) lived to the average age of 71.8 years.

It is said about these ever dwindling, shy, secretive people, that in the Past, they did not have any instruments to play as their own, in fear that others would hear them. Maybe it is the time for them to find their voice and tell their story, before it is too late and there is no one left to tell it.