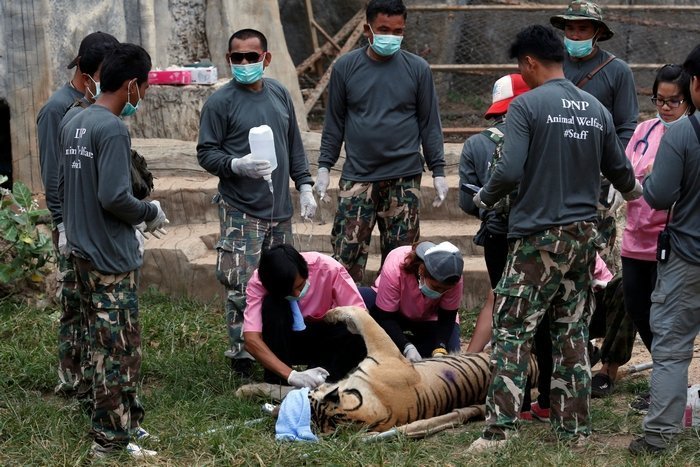 A sedated tiger is stretchered as officials start moving tigers from Tiger Temple, May 30, 2016. REUTERS/Chaiwat Subprasom

Tigers removed from Kanchanaburi’s Tiger Temple. A tiger yawns before the officials start moving them from the Tiger Temple, May 30, 2016. Photo: Reuters

Wildlife authorities yesterday raided a Buddhist temple where tigers are kept, taking away three of the animals and vowing to confiscate scores more in response to global pressure over wildlife trafficking.

The Tiger Temple, or Wat Pha Luang Ta Bua Yanasampanno, in Kanchanaburi province has more than 100 tigers and has become a tourist destination where visitors take selfies with tigers and bottle-feed their cubs.

The temple promotes itself as a wildlife sanctuary, but in recent years it has been investigated for suspected links to wildlife trafficking and animal abuse.

Wildlife activists have accused the temple’s monks of illegally breeding tigers, while some visitors have said the animals can appear drugged. The temple denies the accusations.

Monday’s raid was the latest move by authorities in a tug-of-war since 2001 to bring the tigers under state control.

Adisorn Nuchdamrong, deputy director-general of the Department of National Parks, said the team had been able to confiscate the tigers thanks to a warrant obtained a few hours before the operation.

“We have a court warrant this time, unlike previous times, when we only asked for the temple’s cooperation, which did not work,” Adisorn told Reuters. 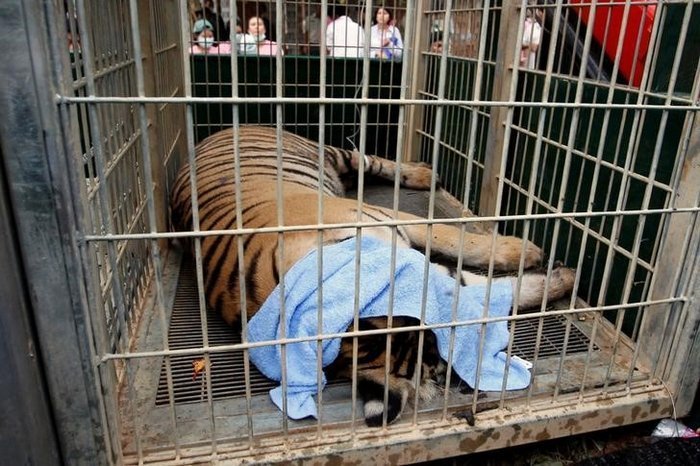 A sedated tiger is seen in a cage as officials start moving tigers from Tiger Temple, May 30, 2016. REUTERS/Chaiwat Subprasom

A sedated tiger is put in a cage. Photo: Reuters

Officials from the Department of National Parks, Wildlife and Plant Conservation said they planned to confiscate and remove more tigers from the temple today and send them to a state-owned sanctuary.

Previous attempts to inspect the tigers have largely been blocked by the temple’s abbots but, in January and February, wildlife officials removed 10 of the tigers.

Thailand has long been a hub for the illicit trafficking of wildlife and forest products, including ivory. Exotic birds, mammals and reptiles, some of them endangered species, can often be found on sale in markets.

The government introduced new animal welfare laws in 2015 aimed at curbing animal abuse, but activists accuse authorities of not enforcing the legislation properly.