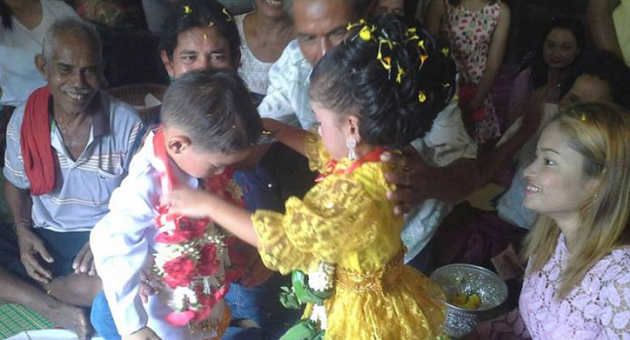 PATTHALUNG:– Three year old Thai twins get married. Two three year old twins “got married” in the south of Thailand on Friday after their “incredible” recovery from illness stunned family and neighbours.

The ceremony, attended by hundreds of locals in the Patthalung area of the deep south, featured all the trappings of a Thai wedding – such as the traditional gifts for the nuptials and even a dowry of 150,000 baht for the hand of the female twin in marriage! This tradition is something seen from time to time in Thailand when a family is struck by misfortune of one kind or another.

In this case the mother, Chayanan Saramolee,36, had fallen sick while carrying twins and was constantly ill. After the birth of her children – Thorfan and Marwin, born three minutes apart – the children too were constantly in and out of sickness for a long period.

It was decided to arrange a mock marriage between the two and, according to the father, as soon as this was done everyone recovered as if by magic. Last year, a couple in Chainat arranged for their four year old twins to be married because they believed that if they didn’t, the children would die at the hands of evil spirits.