The Western backpacker: an endangered species?

The Western backpacker: an endangered species? Intrepid travelers once ventured to the jungles of Southeast Asia for genuine budget adventure, where getting around could mean sweating for hours on a bus with locals taking their chickens to market.

Now, visitors to places like Thailand and Cambodia could well find themselves bundled onto a tour bus full of backpackers, relaxed after a stint by the pool, tummies full of burgers and European lager.

“It’s become so commercialized – and the worry is that it’s having an impact on prices for travelers, and on local communities.”

Little-to-no specific data exists on how much prices have risen in the region’s backpacking haunts, also found in Vietnam, Malaysia, Laos, Indonesia and Myanmar. The Western backpacker: an endangered species?

But the region’s rapid economic development is certainly challenging notions of what it means to be a backpacker.

An analysis of 1,200 questionnaires and 90 interviews by Dr. Hampton and Malaysia-based academic Amran Hamzah identified a clear trend of commercialization in the industry. Journey choices, and the scope for true independent or even spontaneous travel, appeared vastly reduced, the study found. 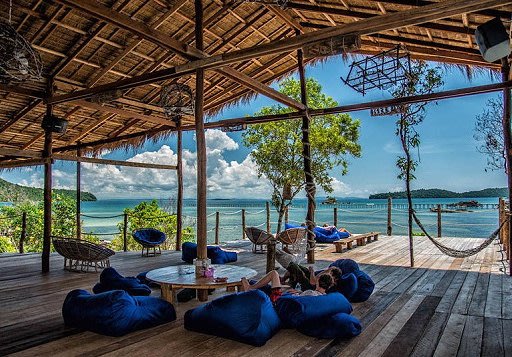 Hardly roughing it: a hostel in Koh Rong Samloem,Cambodia. Hostelworld

To be sure, the pace of change isn’t uniform throughout the region.

Cat Long, a 28-year-old from London, saw countries including Thailand, Vietnam and Cambodia in 2006 on a gap year, then returned to visit Thailand and Laos in 2015 with her boyfriend. She says she encountered other foreigners almost everywhere she went, but levels of Westernization varied.

The small town of Pai in northern Thailand, for example, possessed a beautiful charm despite its popularity with tourists. “We hired a moped and within 15 minutes we were in the mountains, passing local villages and stunning countryside,” she says.

On the other hand, Luang Prabang in northern Laos, was a big disappointment.

“It felt like it had lost its identity to tourism, which was a real shame.”

Backpackers like Cat can be found almost everywhere, of course. But the ‘Hippy Trail’ in Southeast Asia remains one of their oldest and most popular playgrounds. The path was forged in the 1960s and 1970s, when Westerners seeking inner peace – and perhaps a hint of danger – trekked overland from Europe to India and Southeast Asia.

It was only a matter of time before governments and tourism companies tried to make a buck.

Leonardo DiCaprio in The Beach. The Western backpacker: an endangered species?

The Beach – Alex Garland’s 1996 novel made into a movie starring Leonardo Di Caprio – traces a young man’s search for a legendary and remote Thai coastal enclave.  In reality, the place where much of the film was shot, Maya Bay on Phi Phi Island, is visited by thousands of tourists a day.

And all those tourists aren’t necessarily createing economic prosperity for the locals.

For conventional holiday destinations such as New York, London or Paris around 70c in every tourist dollar leaves the country through ‘economic leakage’, Dr. Hampton’s research shows. The leakage occurs via imported goods and services, including foreign hotels and airlines.

The equation is typically reversed in poor countries: 70c stays in the local economy because tourists trade with local villagers. The danger is this advantage could be lost if big tour companies muscle in on their territory with flashy new resorts.

“I suspect most tourist businesses have been set up by Westerners, who have the money to do so, but these businesses provide jobs for the local people, and in the most part retain their authenticity,” says Cat. “Similarly, there are plenty of restaurants and stalls in every town, run by locals who profit from the tourist industry.”

So it’s not all bad news. Tourism provides nations in Southeast Asia with a large chunk of their revenue and some of it should, theoretically, trickle down to local communities through government spending.

An elderly Vietnamese woman at a market.

For tourists, meanwhile, Southeast Asia remains a relativley cheap holiday destination. That’s despite a rapid rise in the value of the region’s currencies over the past decade. The Thai bhat, for example, has appreciated by about 50% against the British pound since 2006.

Cat found things more expensive in 2015 than in 2006, but not much: she could still rent a room with an electric fan for around £5 a night in parts of Thailand and Laos.

Prices have generally increased by much more in Thailand’s south, the home of coastal tourist meccas such as Phuket and Koh Samui, where a double room in a five-star resort can set you back hundreds of pounds a night.

A McDonalds can now be found in most Thai towns, but Cat wasn’t necessarily put off by the burger chain’s presence.

“Southeast Asia is very welcoming and easy to navigate, and therefore not stressful. And it is naturally beautiful and culturally fascinating, so as long as tourism doesn’t dilute that, it will remain a perfect place to visit, for backpackers, couples and groups alike.”

Dr. Hampton says there’s still remote places available for the hardcore backpacker willing to go the extra mile. Myanmar, for instance, is only just opening up to tourism since decades of military junta rule came to an end.

For many, though, it’s debatable whether the independent backpacker romanticized in The Beach has become little more than an everyday tourist. The Western backpacker is maybe no more.