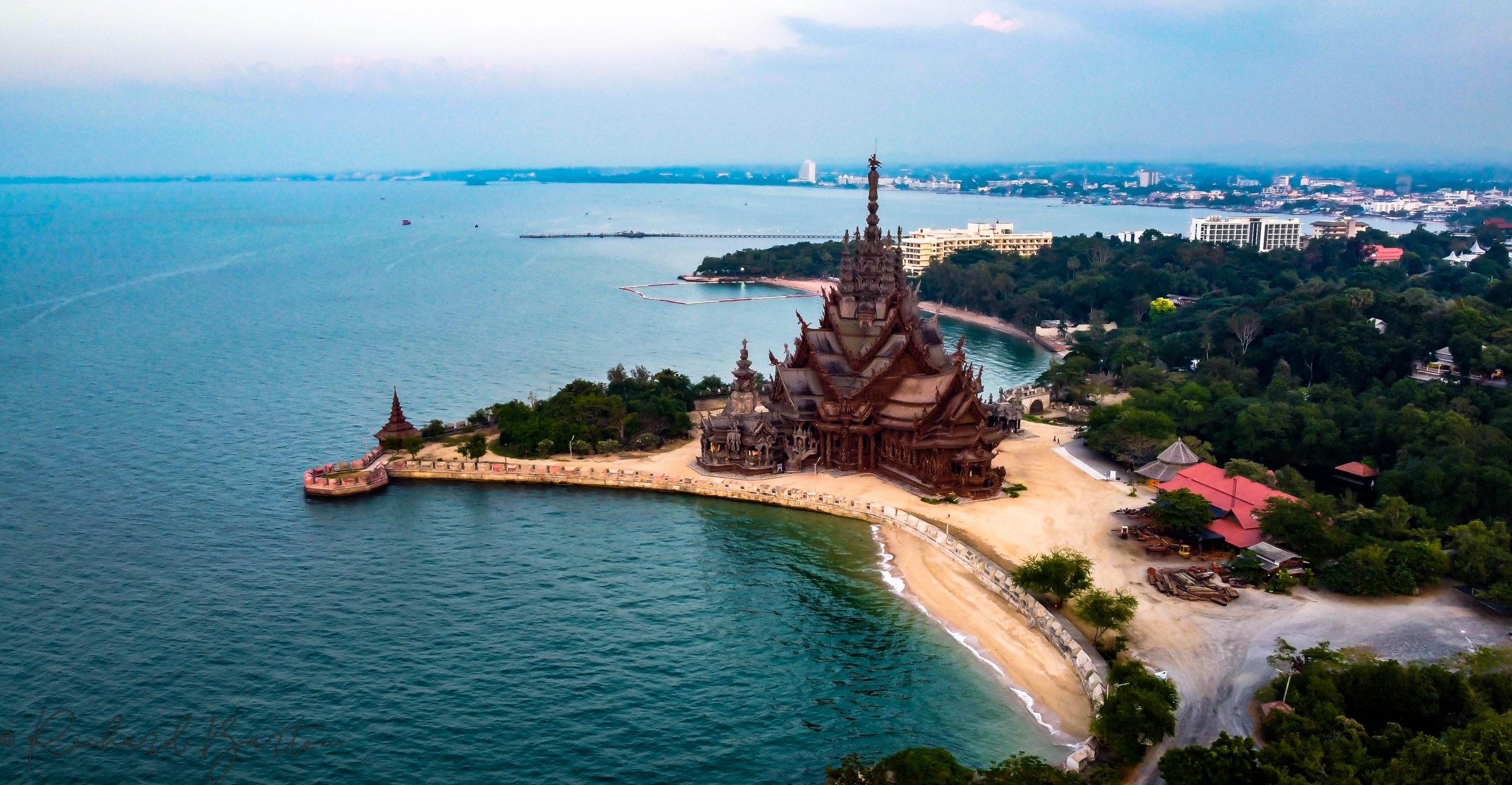 The Sanctuary of Truth Pattaya. The moral is reflected from beautiful woodcarving at the sky- high created by an experts. The Sanctuary of Truth Museum Located on the beachfront of Ratchavete Cape, Nakluea Subdistrict, Banglamung District, Chon Buri Province on 80 rai of land, the woodcarving castle features an eye-catching pagoda-shaped structure on the top. If you look from afar, you will see as if the castle is ascending from the sea. It’s so splendid. Between the sea and the castle, there is a fence to protect the heavenly castle. It’s the work of arts by Thai craftsmen and artisans in the reign of King Rama IX. With the experience in the construction of the Ancient City and in-depth study of art, the architectural team has successfully materialized the imagination into the spectacular castle.

The concept is to have the entire castle made from different kinds of wood as the value and beauty of the wood remains long. Construction is made according to a model designed. All the floors are made from large planks. Large wooden posts carry the entire structure, linked together by the ancient joining techniques – tongue and groove (wedge) techniques, butt joint, dovetails, sapped spurs, etc. The roof of the 4 portals has been designed with traditional decorations at the gable apex, toothlike ridges, gables and woodcarving goddesses according to the belief of the Easterners. It’s a perfect combination of different branches of arts. Each of the 4 portals is unique. The front faces the sea and welcomes visitors. A large 4-face woodcarving Brahma stands on the gable with an opening for visitors to see the sea and horizon.

Only hardwood such as mai daeng, mai takien, mai panchart and teakwood has been selected to build the main structure of the castle. The main post is made from a 600-year-old takien wood and only ancient joining techniques have been used – tongue and groove (wedge) techniques, butt joint, dovetails, sapped spurs, etc.

Before you get into the castle, there is a viewpoint where you can see the entire castle floating from the sea. Around the castle are beautiful gardens, woodcarving workshop and souvenir shops. Visitors will be given with a safety helmet to go inside the castle as the wooden castle still have erections and repairs going on. A tourist guide will be provided to explain to you about the castle for about 20 minutes and then you’ll be free to view the castle and take photos.

The Sanctuary of Truth Pattaya Museum is another Unseen in Thailand. The Tourism Authority of Thailand says “the imaginary wooden castle at the horizon stands majestically like a mountain. From the base to the top, it’s all made of wood like a wooden hill. Who could believe it’s all made by Thai craftsmen and artisans without a single nail.” The Sanctuary of Truth Museum features spectacular woodcarving sculptures at every corner of the castle. They are as follows.

Eastern Hall – Father and Mother (Gratitude) The sculpture of Father and Mother, who give birth to us out of love and care. The love of our father and mother is so great and sincere without expectation of anything in return and that love is greater than the sky and oceans. It reflects human bond and spiritual miracles. Children can learn from that great love and be grateful to them in return. Humans then differ from other creatures on earth.

Western Hall – Sky and Earth (the 4 basic elements) The sculptures symbolize the creation of earth from 4 elements. The sky symbolizes wind and fire, and the earth symbolizes water and soil. The 4 elements have formed planet earth, which features nothing definite or anything tangible. It’s all like just an assumption. The supreme divinity who possesses the 4 elements includes Brahma, Shiva and Vishnu

If he opens his third eye, the front of his face will be put on fire.

On the top of this portal, a large Brahma face stands. Brahma is one of the great supreme deities (Trimurti) (Brahma, Shiva and Vishnu). He is the creator of the earth and everything on earth. In Buddhism, abodes of Brahma or 4 Buddhist virtues, known as four immeasurable, namely, benevolence, compassion, empathetic joy and equanimity.

Northern Hall – Social and Spiritual Development The sculptures depict the beliefs of Taoism and Confucianism, reflecting supreme morality of Bhodisatta in the Mahayana Buddhism. Though humans differ at birth, if they do good, they can be liberated from vices, greed and passion. They have to learn how to share and love one another. Humans can be liberated from bad omens if they make merits and do good. That is the philosophy of Mahayana Buddhism – the great vehicle that will lead people to Nirvana.

Southern Hall – Sun, Moon and Planets The arts feature the sun, moon and deities for each planet ascending or orbiting the universe. Those planets have influenced the environment and lifestyle of people on earth. Creatures will evolve and humans are differentiated from other creatures. Humans have conscience and are aware of what is good or bad. Deities for each planet have influence over humans. The sun, moon and nine planets according to the ancient beliefs have influence on human life as follows:

The Central Hall, Great Throne and Liberation The woodcarving door facades at 4 directions symbolize the entrance to the universe or Aryasatyani or the 4 Noble Truths, the main teachings of the Lord Buddha. The great throne symbolizes emptiness of the universe or Nirvana, the center of the universe and genuine truth from the beginning to the end of the world.The Sanctuary of Truth Museum, owned and designed by Mr. Lek Viriyahphan