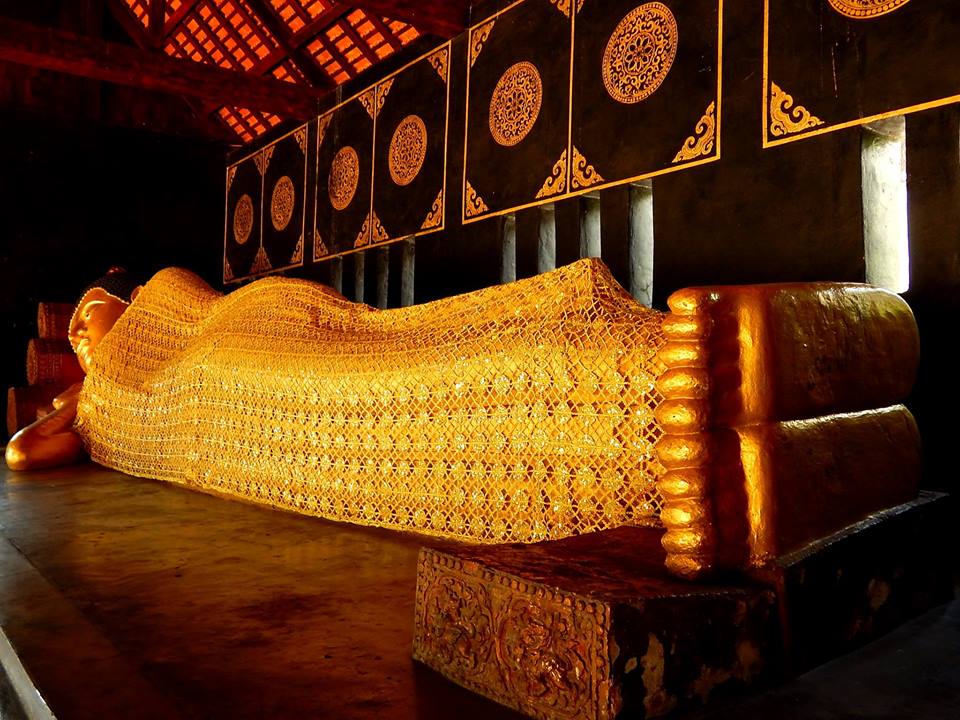 The reclining Buddha is located at Wat Chedi Luang, also known as the Jedi Luang and “The temple of the Great Stupa”

It was then given the great honor of housing the Emerald Buddha, the holiest religious object in Thailand (now kept in Wat Phra Kaew, Bangkok). At this time, Wat Chedi Luang rose to a height of 84m (280 ft.).

A century later, a severe earthquake (1545) toppled part of the great spire. The Emerald Buddha was kept in the chedi for another six years, then moved to Luang Prabang (in present-day Laos) by the king.

Five years later, Chiang Mai fell to the Burmese. The temple was never rebuilt, but even at its post-earthquake height (60m) it remained the tallest structure in Chiang Mai until modern times.

Several viharns were added to the temple complex in subsequent years; the largest viharn was built in 1928.

What to See at Wat Chedi Luang

The ruined brick chedi of Wat Chedi Luang now rises to about 60m in height. Its base is 44m (144 ft.) wide. It has four sides, each with a niche approached by a monumental stairway guarded by stone nagas (mythical snakes). Elephants stand guard midway up the platform.

Despite its ruined state, the chedi still has several Buddha shrines and remains an active place of worship frequented by saffron-robed monks.

The large viharn (assembly hall) next to the ruined chedi was built in 1928. Its impressive interior, with round columns supporting a high red ceiling, contains a standing Buddha known as the Phra Chao Attarot. Made of brass alloy and mortar, the Buddha dates from the time of the temple’s founder, King Saen Muang Ma (late 14th century).