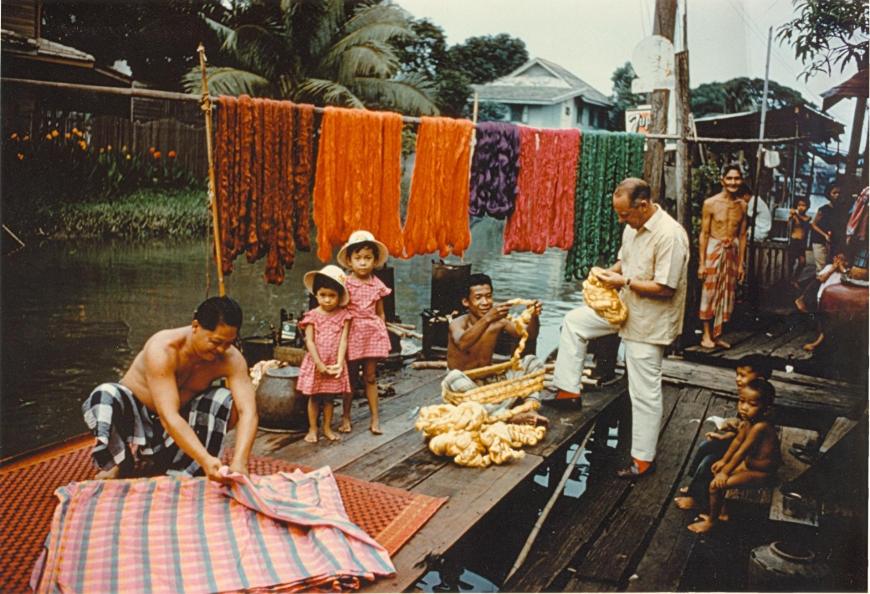 The Jim Thompson legacy and mystery. The name Jim Thompson is synonymous with Thailand and the silk trade since the pre-World War 2 years to present day Thailand. One might ask “How a “farang” – which is a term given to white foreigners in Thailand, could have achieved such a magnanimous status in the Far East such as Thailand? In those days, Siam as Thailand was called before it was renamed Thailand in 1948, was not a place frequently visited by the casual tourist. Siam had not yet fully opened its doors to full-fledged tourism and the foreigners who visited Siam in those days were mostly tradesmen, diplomats, soldiers on R&R between services in the Far East such as Singapore, Malaya, all the way to China and India.

After the war, as the political scene in Thailand was changing and the people became more traveled and schooled abroad, it was a new country to be discovered which offered an exotic flavor for the trade of spices, minerals, exotic foods and art pieces as well as fabrics became a trend for the Western countries. The affluent and more traveled peoples of the west were seeking more exotic items and were willing to pay the price for unique items from the east. While amenities were not yet available for the tourist crowd, meaning there were no such things as expensive five star hotels nor state-of-the-art public transport systems, only the seasoned and daring traveler could find Thailand an exotic and interesting place to travel too while bridging the Siamese language barrier. At that time, Jim Thompson, a young OSS officer in the American forces who was at that time posted to the capital city of Bangkok in Thailand, was fascinated by the country and its people. His initial and main profession was as an architect prior to military service. This was the base of his love for the creativity of colors and design which would later be a predominant role in setting the course of history by a foreigner in Thailand while his background in the military espionage services would make history in Malaya. He spent many years in Thailand and Malaya, while working on the insurgency of the communist regime between the two countries which would eventual lead to his mysterious disappearance in Cameron Highlands, in Malaya many years later. No one knows what happened on that particular, nor were there any traces of his whereabouts, leaving much speculation in the wake of his disappearance for decades to come.

Jim Thompson loved to collect art objects of all types while residing in Thailand and he had a keen interest in the art of silk weaving. He discovered that Thailand was a suitable location for breeding the silkworms and mulberry bush which was required as a source of food for the silkworms to flourish. It was also a time when silk material was only known to have come from China, but it was a relatively new market which Jim Thompson saw as an opportunity to expand as a business.

He was fascinated by the vibrant colors that could be produced on the silk material and he was the primary source for reviving the then ailing silk industry in Thailand when he opened new markets in the west for the material. He eventually invested 30 years of his life and investments into improving, researching and marketing the fabric and developing more ingenious ways to breed and manufacture the silk material. He was also known as the “Father of the silk industry” in Thailand.

The legacy of his passion for silk and the finer things in life including teak and ceramic items soon became a brand name inspired by the lifestyle and mystery of Jim Thompson which was larger than life. Soon his creations and collections made its way to the glittering world of catwalks and fashionistas for brands in Europe and America.

Nestled in a secluded area of Bangkok city is an exotic collection of teak houses along the Saen Saeb Khlong (canal). Easily missed as it is a quiet residential lane, you need to look out for a signage that indicates it is the Jim Thompson House. This iconic landmark is an epitome of finery and style with authentic traditional Thai styled teak houses which were painstakingly transported from Baan Krua and Ayutthaya then reassembled in Bangkok and lush exotic gardens beautifully landscaped in tropical flora. This place was eventually converted into a museum, silk weaving center, retail store and a restaurant.

Inside the courtyard you will be greeted by traditionally costumed women who will demonstrate the silk making and weaving process. Here you can try your hand at dipping the raw silk cocoons into hot water to unravel it into spools of raw bleached silk threads. It is hard to imagine that this fine thread is a by-product of the home for a humble moth caterpillar!

These fine silk threads have the ability to absorb very vibrant dyes turning them into magnificent rich colored spools of thread. Once woven, this silk thread also has extreme tensile strength making it a very durable thread for weaving into material of different grades and uses.

Much of the dye colors are made from natural items such as flowers, roots, minerals, and earth. For instance the rich indigo color which is unique to Thai silk is derived from the butterfly pea flower, while the rich ocher color comes from the turmeric root. The raw bleached silk threads are soaked into these dyes and then treated with a solution to make the color permanent before it is dried and spooled into new colored rolls of dyed colored silk threads which is then ready to be woven into fabrics at the loom.

There is an area further in that contains displays of the silk worm breeding process as well as live silk worms that you can observe. Clearly marked boards explaining the silkworm breeding process is a fun way to learn about the trade and if you dare to touch the silkworms itself on the tray, you can get a fairly general idea of what these little beauties are capable off. A side note is that these silk worms after having been removed from their cocoons are not entirely wasted either. Much of it is turned into a tasty snack by the locals who relish this delicacy deep fried with pandanus and lime leaves and flavored with a dash of soy sauce. You can sometimes see this snack for sale at popular night markets and along Khaosan Road for those interested to give it a try.

There are also silk weaving looms and a demonstration of silk weaving in one of the foyers of the teak houses. The weaving process is an intricate work of art and the more patterns on the fabric, the more tedious the weaving process. The combination of colors and designs is what makes silk such a unique and appealing fabric, providing a richness to the outfit which is unrivaled by other materials hence the rather high price for the fabric but worth the price.

There is a tour activity which is a separate item from the casual walk around the premises. This tour has a schedule and guide that will bring you into an area inside some of the wooden houses which has a rich collection of antiques, sculptures, ceramics and paintings while the guide gives you a brief history of Jim Thompson and his life. Much of the collections are priceless and gives a good indication of the effluent and rich culture of early Siam.

You can also walk around the large sculpture and landscaped compound which is planted with many exotic and rare trees as well as flowers which is interspersed with a good collection of stone and wooden sculptures. Many of the nooks and corners make a picture perfect location so having a camera is a must have item on the trip.

One of the delights of visiting the Jim Thompson House is the restaurant in the compound. The menu in this restaurant has a unique flavor of Thai cuisine which is delectable while the ambiance is reminiscence of the olden days where it was a classic experience to dine in the style of the early post-war years. Noteworthy is that most of the ingredients used come from their very own Jim Thompson Farm in the province of Nakhon Ratchasima which opens its doors to the public once a year in December.

A trip to the Jim Thompson House is not complete without a visit to the famous Jim Thompson brand retail store where you can get anything from small handmade souvenirs to exquisite clothing and materials which are a signature of the brand.

Getting to the Jim Thompson House is easy if you follow a tour but you could also make your way there on your own by getting a cab to take you there. Alternatively, you can use the BTS along the Sukhumvit line and getting off at BTS National Stadium at Exit 1 and taking a 5 minute walk from the station. The proper address for the Jim Thompson House is 6/1 พระราม 1 Khwaeng Wang Mai, Khet Pathum Wan, กรุงเทพมหานคร 10330. Opening hours are from 09.00am to 06.00pm daily and the initial entrance fee to Jim Thompson House without the inside tour is THB150 per person.