The final tigers have been removed from the Tiger Temple, but what does their future hold? 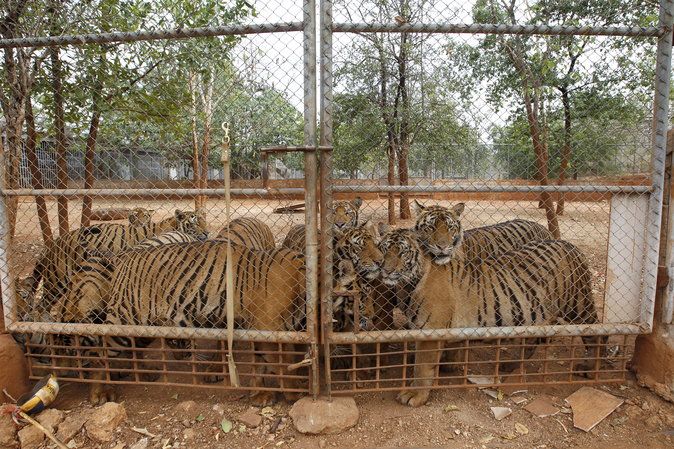 The final tigers have been removed from the Tiger Temple. Despite all of the surprising items that have turned up along the way, the Department of National Parks, Wildlife and Plant Conservation (DNP) expects to finish removing the final 33 tigers from the scandal-ridden Tiger Temple today.

The other 104 tigers have already been moved to the two Ratchaburi wildlife breeding centers since Monday.

But, of course, there’s more to the story.

DNP officials are concerned because more than 20 tiger cubs are missing from the temple. The cubs, who were between one and two months old, were a temple attraction that visitors were allowed to feed milk from a bottle.

Authorities were surprised by their absence and are eagerly trying to find the missing cubs.

The DNP has also made their first announcements about the future of these removed tigers.

Park officials are collecting DNA and blood samples to determine if they are native or Bengal tigers.

After some time, the native tigers can be released into wilderness after being taken care of at the wildlife breeding centres. They will be able to roam freely and hunt for themselves

The Bengal tigers, however, can’t be freed since they have lived their entire lives in captivity and can’t feed by themselves in Thailand’s natural surroundings. Bengals are native to India and Bangladesh.

A thorough search of the temple grounds yesterday unearthed many tiger claws and fangs hidden inside alms bowls while a pickup truck attempting to leave the temple was searched and held two tiger hides, 9 fangs and over 1,000 amulets made of tiger skin, according to Thai PBS.

That came after the horrific finding the day before of 40 frozen baby tiger cubs, aged one day to one month, filling the temple’s freezer on Wednesday.

The truck was driven by temple official Net Kunruengkrai, who was driving apprentice monk Phra Lamom out of the temple along with two other temple’s employees and three large bags on the truck.

The driver claimed he was driving Phra Lamom to see another monk. At first, the driver could not give an answer about why his truck contained the contraband but later he admitted that Phra Lamom brought the bags into thetruck, but the monk denied knowledge or involvement.

Authorities think the monks were attempting to remove evidence once they heard about the inspection.

More hides and fangs were discovered in the monk’s and abbot’s rooms yesterday after officials used bolt cutters to enter the rooms.

Saiyok district police are expected to file criminal charges against all responsible people.

The final tigers have been removed from the Tiger Temple