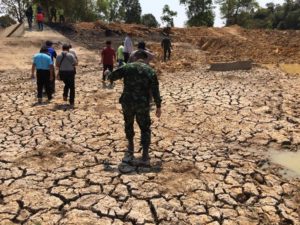 Residents in some areas face rationing because of daily limits on tap-water.

Abhaibhubet Hospital in Prachin Buri province is taking between 20,000 and 30,000 litres a day via water trucks.

“Local military bases have stepped in early this month to ensure the hospital has water for patients needing dialysis, as well as for other purposes,” Deputy Prime Minister and Defence Minister General Prawit Wongsuwan said yesterday.

He said military bases had also sent water trucks to the Fort Chakkrapong Hospital, in Prachin Buri, for the same reasons. Local military bases had their own waterworks facilities and a reservoir, he said, so they could share water with the hospitals.

Public Health Minister Piyasakol Sakolsatayadorn, meanwhile, headed to Chiang Mai province yesterday to express moral support to the San Patong Hospital, which has struggled with a water crisis since 2010.

The hospital needs about 200,000 litres of water a day, which means it requires support from other units at a time when tap-water may not always be running, given current limits on water resources.

At the peak of this crisis, the hospital used to ask for 40 water trucks a day – until the Public Health Ministry gave it Bt6 million to dig artesian wells and to secure better access to the Provincial Waterworks Authority.

“The hospital is now preparing a surface water system too. After it is completed, its water shortage will ease even further,” Piyasakol said.

But impacts from the drought are also being felt by ordinary households.

Yuttapong Pichayaporn, manager of the Pak Thong Chai waterworks in Nakhon Ratchasima, disclosed yesterday that sources of raw water for tap-water production had shrunk to the point that his office had decided to make tap-water available only during some periods during the day.

“We need to take such measures to ensure tap-water will run throughout the ongoing dry season,” he explained.

His branch’s services cover 9,600 families. Some of them can only get tap-water between 4pm and 8pm. Many others faced even more restrictions. Tap-water at homes will run from 5am to 9am on alternate days only.

Officially, the country’s dry season ends late next month. However, several experts have warned that the wet season may start late this year.

Among measures used to tackle the Thailand’s water drought are projects to dig artesian wells.

The Groundwater Resources Department (GSD) is now preparing to dig 735 more artesian wells. Private operators will be hired to dig wells 100-metres deep at a standard price of Bt240,000 per well.

These projects will go ahead even though the Office of the Auditor-General (OAG) warned the Natural Resources and Environment Ministry that illegitimate commissions were allegedly collected in 10-30 per cent of budgets for digging wells – for materials, fuel and staff allowances and totalling more than Bt100 million in damages. Auditor-General Pisit Leelavachiropas said that such ill-gotten gains were shared among those involved at all levels.

But GSD director general Supot Jermsawatdipong said yesterday: “There is no such network of corrupt officials engaged in artesian-well digging projects. But we are investigating into whether individual officials have been corrupt.”

He vowed to take harsh disciplinary action against officials found guilty in the investigations.

“In addition to launching inquiries, we also plan to introduce additional anti-graft measures,” Supot said. In a related development, the Natural Resources and Environment Ministry yesterday dispatched a helicopter to help extinguish a bushfire in mountainous areas of Nakhon Nayok province.

The fire, which broke out on Wednesday night, has already ravaged between 200 and 300 rai of forestland. Deputy Governor Woraphan Suwannus expressed hope yesterday that with the helicopter and hundreds of officials on the ground, the blaze would soon be put out.