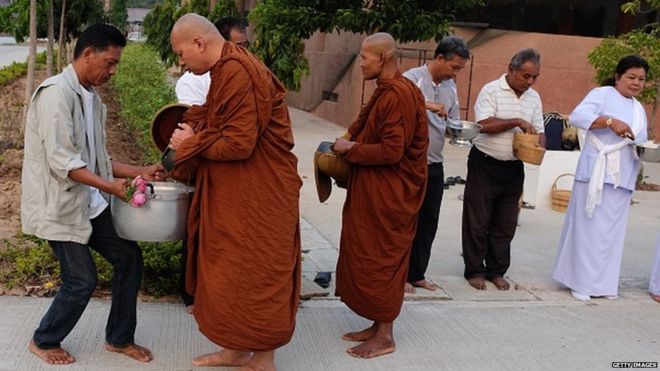 Thailand’s overweight monks are put on diet. Steps are being taken in Thailand to wean Buddhist monks off unhealthy food after a study suggested that almost half of them are overweight.

Jongjit Angkatavanich, a health and nutrition expert at Bangkok’s Chulalongkorn University, says 48% of monks are obese, the Bangkok Post reports. Her warning that “Obesity in our monks is a ticking time bomb” seems to have given the religious authorities cause for concern, with her figures showing that 42% have high cholesterol levels, 23% suffer from high blood pressure, and over 10% are diabetic. Dr Jongjit didn’t say how many monks were involved in a study, but she’s helping to roll out a national programme aimed at slimming down Thailand’s holy men.

The government already covers medical fees for monks, who play a prominent part in Thailand’s social and religious life, and spent more than 300m baht (£6m; $8.5m) on countering chronic obesity-related problems in 2012 alone, the paper says. Dr Jongjit singles out the sweet drinks and fatty foods that members of the public donate to the monks, and her Faculty of Allied Heath Sciences university is launching a campaign to promote leaner clerical living.

A monastic college and four temples in Bangkok are pioneering nutritional cooking programmes heavy on fibre, protein and calcium, and encouraging the clerics to take more physical exercise. Dr Jongjit says the monks involved have already lost an average of one kilogram (2.2lb) in weight over eight weeks, cut their waistlines by 1.4cm (half an inch), and seen drops in cholesterol levels. Some monks complain that they don’t know how much weight they’re putting on, which is why Chulalongkorn Memorial Hospital has launched a special girdle that tightens around the waist as a gentle reminder.